A useful thing wot I found out.

I am Asthmatic. Not badly so, but like most medical things, it needs management.

This trip to France has been a couple of weeks longer than I had planned. Firstly because I was waiting for it not to look like it was going to rain (so I could paint), and then because I was waiting for Adrian to arrive with the caravan (more on that later), and then because we decided Susan would come down after her annual conference. All this means that medical supplies were getting low.

The one medicine I need to have available is ventolin (salbutamol) inhalers. These are available on prescription in the UK at £7 for two inhalers, or £16 over the counter for one inhaler. I sent a text message to Susan asking her to get a prescription made out and filled*, and also to find out if Ventolin is available across the counter in France. As she is gearing up to Annual Conference, this is a bit of a bind.

The internet is of NO use at all in finding out the availability of drugs across the counter in France. Believe me, I tried. The only thing I found was the tale of someone quoted 300€ for an inhaler. In the end I decided to stop being a chicken, and ask at the chemist. (Asking stuff at Chemists fills me with dread. I don't have the vocabulary)

The Pharmacies in Preuilly. I used neither of these, but the pharmacy
next to Intermarche in Yzeures, simply because that's where I was. 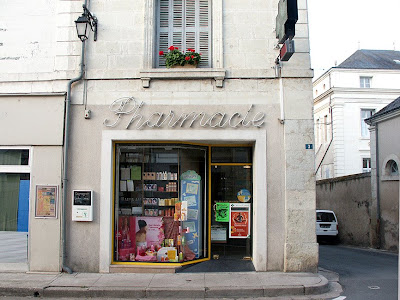 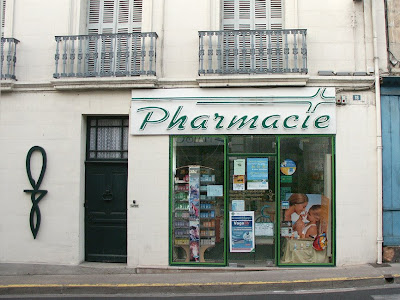 I am happy to report that a Ventolin inhaler costs €5.08 across the counter in France, with no prescription and no questions asked. Maybe it is because I had an inhaler with me, but it was easy and cheap

So now we know.

*The arcane NHS system means that even if you have a repeat prescription it isn't really a repeat prescription, merely a piece of paper telling the Dr he can write a prescription without seeing you. This means your "repeat" has to be taken to the Doctor, then once it is written (usually 2 days) it can be picked up from the Pharmacy. Anyone in Australia who wants to complain about their system needs to have a serious think..........
Posted by Simon at 10:00