Asterix Eat Your Heart Out

Out the front of Notre Dame de Paris is an imposing bronze statue of Charlemagne, mounted and attended by men with serious moustaches, in the sentimentally nostalgic and romantic style of the 19th century vision of Gaul. The statue is set very high on a massive pier, to add to its magnificent appearance. 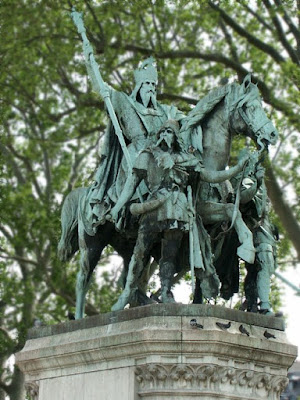 I strongly suspect the costume designer for Astérix & Obélix: Mission Cléopâtre modelled at least some of the wiley and courageous Gauls' outfits on the fine upstanding chaps in the statue, even though Charlemagne was several hundred years after the Roman's had given up and gone home.

I can highly recommend Astérix and Obélix: Mission Cléopâtre as a hilarious way to practice your French aural comprehension, by the way.

I loved that film and had many good laughs at the jokes and puns.

Indeed, it is fun spotting the jokes and puns as a French language learner. The costumes are a lot of fun too, especially the Egyptian ones, and the visual gags that everyone can get.

Maybe there's some IOC rule against deforming the name of the games.