Bringing in the washing in Preuilly is often an exciting wildlife experience.

A few weeks ago, I had to flick a Scutie (House Centipede Scutigera coleoptrata) off a pair of Simon's underpants before unpegging them. Since he has been bitten once by a Scutie, resulting in a very painful, swollen and purple finger, he blanched at the thought of what might have occurred had I not noticed the beast. 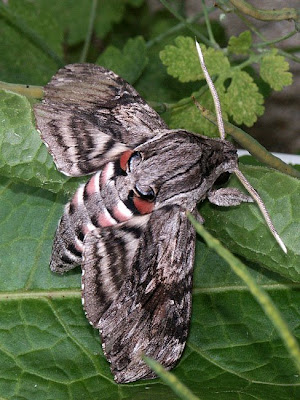 A couple of days ago though, he was engaged in the same domestic task and found something much more appealing clinging to a tee-shirt. 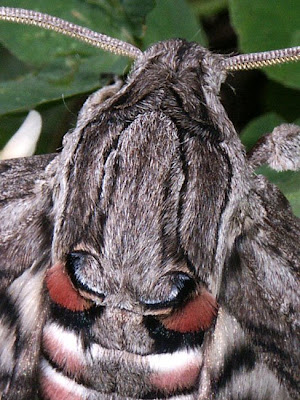 The Convolvulus Hawkmoth (Sphinx du Liseron) Agrius convolvuli is a large and very beautiful mottled grey moth, that appears in the late summer-autumn having migrated from Africa. They occur in Europe, Asia, Africa and Australia, but not America. They can be seen in the evening hovering in front of long tubular flowers, extracting the nectar with their exceptionally long tubular 'tongue' (much longer than their body!) – rather like the Hummingbird Hawkmoths I wrote about a few weeks ago. They are called Convolvulus Hawkmoths because their caterpillars feed on Field Bindweed Convolvulus arvensis. They don't breed very much in Europe though. 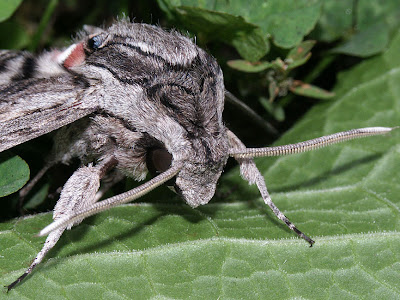 Simon got some really good photographs, and I was struck by how much like a fighting bull it looked from head on. When I looked it up to find out what they were called in French, I discovered that I am not alone in this impression – one of its French names is le Sphinx à cornes de boeuf! The beautiful patterns in its 'pelt' swirl and the 'hair' sits in different alignments just like in mammals, where the fur follows the muscle configuration. (Its other French name is the same as the English – 'liseron' is the French for 'bindweed'.)

With a wingspan of 80 - 120 mm (and generally over 10 cm), they are in the top three biggest moths that you could see in Preuilly. The Giant Peacock Moth is bigger, but the Convolvulus Hawkmoth's more common cousin, the Hummingbird Hawkmoth is only a quarter the size, at 40 - 50 mm across, and would be lucky to make it into the top 10 size-wise.

Don't forget to click on the images to bring them up bigger in a new window, to get the full effect of the patterns.

Those antennae are incredible!

Yes, Simon was particularly struck by the antennae too. I especially like the poodle-clipped legs.

Very interesting! Too bad I live in the US...would love to see one. Great photos!

Thanks for that link Susan, I'll link through as you have good pix of the thorax!