We have just had my sister and her husband staying. They were our first proper guests, in that they stayed in the house with us, not at a hotel. They are used to camping, so the primitive bathing facilities, lack of running hot water and somewhat makeshift kitchen did not faze them.

They live in Australia, where Kathy works for the Department of Agriculture, Forestry and Fisheries, and John is an engineer in civil aviation, but they had been holidaying in Scotland. They flew in to Charles de Gaulle from Glasgow, then caught the train from CdG to Poitiers, arriving about an hour and a half before I did on the plane from Stansted, so that Simon only had to make one trip in to Poitiers to pick us all up. To fill in the time before I arrived, he took them to see Notre Dame la Grande. 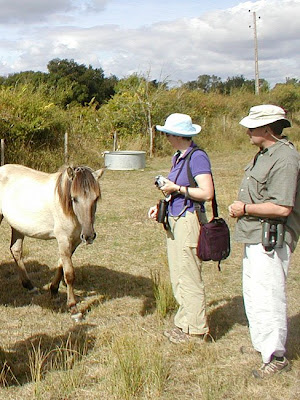 Here they are a few days later, meeting one of the young Konik Polskis at the Réserve Naturelle de la Chérine. Because they were with me and I have permission to survey this paddock, they had the opportunity to come in amongst the herd, but members of the public normally have to restrict themselves to saying hello to the ponies over the fence.

After they left us they hired a car and drove down to Arcachon in Gascony for a few days, and now they are in the Dordogne, near Salat. I booked them into a chambres d'hôte (bed and breakfast) in Arcachon and explained that John is a coeliac (i.e. he is severely allergic to gluten, so cannot eat food made from wheat and other cereals). The hôte in question does not speak any English, and K&J do not speak French (apart from a six week crash course at night school to prepare for this holiday), so the arrangement promised to be interesting. All credit to the owner of the establishment though - he gave them a room which had its own kitchen so they could do their own breakfast. Kathy says the chambres d'hôte and the owners were lovely and they had a great time, although there was a good deal of 'je ne comprends pas' on both sides! They ate very well, including sampling the oysters that Arcachon is famous for. I assume the recent ban on their consumption due to the oysters absorbing the poisonous by products of algal blooms in the warm shallow waters of the Baie d'Arcachon is now over, perhaps because the weather has turned a bit cooler. 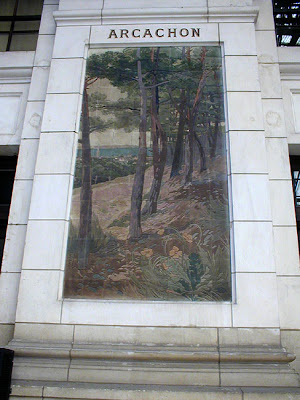 The painted tile panel at Tours station showing that Arcachon was once one of the destinations from this fine old station (now I think you have to catch the train for Arcachon at the other station in Tours, St Pierre de Corps).

We found that eating out with a coeliac in France was far less of a problem than we had anticipated. We ate at a restaurant where we are well known, another that we have been to often but are probably only vaguely recognised at best, and one small, bustling place that we had never eaten at before, in a tiny village, offering a set, no choice, lunch menu. In each case, the waiter took John seriously and suggested suitable menu items, sometimes dashing off to consult the chef just to be sure. Often it was a case of having a meat dish without its sauce. In the little restaurant that was new to us, this was slow cooked duck leg, which had produced a lot of its own flavoursome liquor anyway, and was just as delicious as the fully finished dish with its sauce slightly thickened and enriched with red wine. Nowhere was there any indication from the waiters that it was an inconvenience, but I did make use of the magic phrase 'pardon de vous déranger' ('pardon me for putting you out') several times.

K&J were a bit worried about how they would go once they didn't have me to act as intermediary. They had printed off some cards which explained John's condition (edited slightly from these ones so they were a bit less wordy) but were not really sure waiters would take any notice of them. Kathy tells me that once again it was no problem at all in Arcachon, so I hope that continues. It will be interesting to see what their experience in big bad Paris is, compared to little villages south of the Loire (i.e. comme chez les ch'tis - the sticks).