The main street of Preuilly can be tricky enough in a car (we know at least one person who simply refuses to drive down it) but in a semi-trailer it takes even more skill and patience. 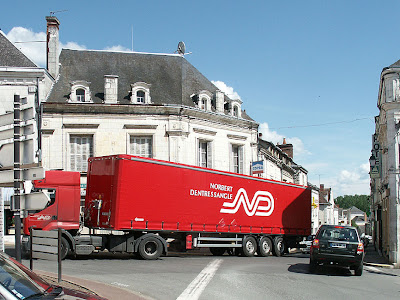 La Grande Rue is two cars wide (just), but the problem arises because parking is allowed on one side of the street. Consequently, those going down the hill frequently have to stop at the top to allow those already on their way up to pass. Coming up the hill, the problem is compounded for a large vehicle because they are generally wanting to turn hard right on to the road to Loches, which means that they have to swing out on to the left hand side of the road to get round. Everyone has to be polite, patient and prepared to back up.

Many French towns have bypasses in order to solve similar issues, but Preuilly has not – probably because it would involve building a new bridge over the Claise. Neither are there traffic lights in Preuilly. Surprisingly, the arrangement very rarely leads to total mayhem or gridlock, but I am regularly astonished by the drivers who come whizzing round the corner at the bottom without a thought that someone may be coming down on the wrong side of the road – out of necessity because of parked cars on their own side, and unable to see around the corner at the bottom until they are already committed. Polite drivers with the imagination to see that it could just as easily be them wanting to come down one day, stop at the bottom and allow the downhillers through with good grace. The occasional driver is apparently completely unable to see why his/her progress is being impeded in this utterly inconsiderate way – after all, they are clearly in much more of a hurry and on much more important business than this fool on the wrong side of the road – can't they reverse any faster?!

(For the rules of the car game Norbert Cricket please see here.)
Posted by Susan at 10:00