Not Sure This Was Quite What Led Zep Had in Mind*... 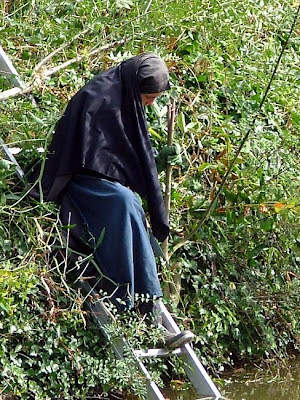 Simon came across this nun the other day. She was removing a tree from the river bank, which I suspect is stabilised by piles or some such, and having a tree growing through them probably weakens them. The convent is on an island in the river, in a village a few miles from Preuilly.

She is what is referred to in our household as a 'full-length' nun i.e. she is wearing a long veil and ankle length habit. This expressions comes from an occasion at Derby railway station in central England, when a friend grabbed me by the arm and hissed 'Look, there's a full-length nun on platform 7 -- that is so rare these days!'

This particular friend collects portraits of nuns. In the 18th and 19th centuries it was still surprisingly common for women from wealthy families to enter a nunnery, either because of a vocation or in order to retreat from the world for one reason or another. Their families often arranged for a portrait to be done, to hang in the family home. My friend's argument for collecting them is that they are often very fine technically, and sometimes by quite important artists, but because of the subject matter are largely ignored by collectors and neglected by the art historians. I went to see his latest acquisition last week, which he tells me may not be a real nun, but someone indulging in that other 19th century passion, dressing up. She certainly is very pink and pretty, so I am inclined to agree with him.

Full-length nuns and priests are not uncommonly encountered in France, out and about shopping for hardware in le Blanc, buying petrol at a motorway aire (service station); unlike in England, where you generally only see them in the confines of the cathedral close. It is one of those interesting cultural anomalies that in a country which is officially secular, nuns and priests are still part of everyday life, but in a country where the head of state is also the head of the church, to see a traditionally robed religious in the street is very unusual indeed.

In Australia, another type of nun will be remembered by anyone who went to a Catholic school -- the industrial strength nun -- those fearsome women who maintained discipline and standards in the classroom just by dint of a glance from their gimlet eye.

Industrial strength nuns must be closely related to battle nuns, and there are some fine examples of these portrayed at Fontevraud in the painted chapter house.

*For those of our readers so seriously uncool as to not get the reference, Led Zepplin are a legendary rock band, whose most famous song is called 'Stairway to Heaven'.
Posted by Susan at 10:00

Email ThisBlogThis!Share to TwitterShare to FacebookShare to Pinterest
Labels: Random Thoughts, Towns and Villages near Preuilly

It's just a spring clean for the May Queen...

The US is also famous for what you call the industrial strength nun. As a kid I was so glad not to be catholic after hearing the stories from friends who went to catholic school.

And who can forget Sister Mary Elephant?

Walt - the explanation was really our parents' generation's benefit. Having said that, I think I'm slightly too young, and not American enough to remember Sister Mary Elephant - I had to look her up.

We ran into the nun in the picture again the other day, but this time she was just picking vast armfuls of vege.