'Sonner l'hallali' is a French expression that means to announce your victory over (or your defeat of) someone or something. In its strictest sense it is the name of the call on the hunting horn when the prey is put to death. Like many of these sorts of terms, it is a contraction -- in this case of 'halez à lui !' (set after him! i.e. a cry ordering the dogs to go after the prey) and was originally used at the beginning of the hunt, not the end. 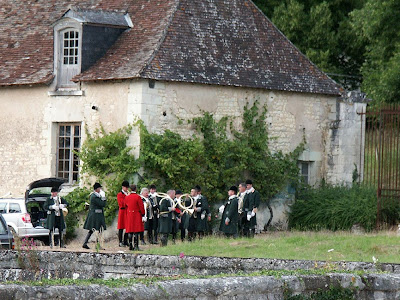 Its opposite is 'boire le calice jusqu'à la lie' (to drink the chalice to the dregs i.e. to suffer complete humiliation). As one of my 'learn-a-French-phrase-a-day' websites points out, there is a rather neat play on words going on here.

Ken - I'm not totally surprised. I haven't either. I just picked them up from Expressio, one of my daily learn French emails. I like Expressio because it doesn't take itself too seriously and plays with words a lot. I really just used these to phrases to hang a quick blog post on and post another picture of horses and hounds, which I love.

Wonderful photo. I envy them their outfits. Is there a shop where I can pick up a long-skirted coat, cap and a pair of boots? You're going to tell me that every French village has a riding-to-hounds outfitter.

Louise, I've never noticed that kind of clothing on sale anywhere around here, but there must be places. Or is it all tailor-made? I bet an outfit would be pretty expensive.

I imagine Horsewood, the chain of equestrian stores in France would sell some of this gear, but not bespoke, and probably not the longer coloured coats. You could certainly get a nice enough pair of boots and a suitable helmet there though. I know of one online outfitters, and there are probably others.