...that you can see at the Musée des Beaux Arts in Tours, for free, without even going inside the building: 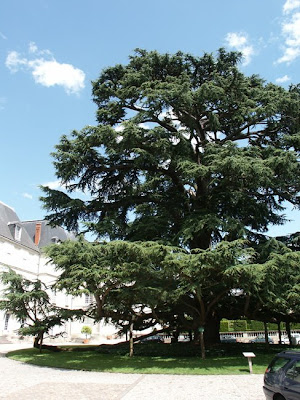 The first is a very large Cedar of Lebanon in the courtyard, unusually well clothed right down to the ground, its lower most horizontal branches resting on the ground or on groaning props. It is impossible to fit the entire tree into one photo -- one simply cannot get far enough back.

Planted in 1804, it is about 31m high, 33m across and measures 7.5m around the trunk. If it were not in this enclosed space it would be even bigger, but because in time it would reach out to touch the museum walls, the branches are periodically pruned. Bad weather causes the curators to worry, as the branches will not stand the weight of too much snow, and there is already a great scar on its northern side caused by storm damage. 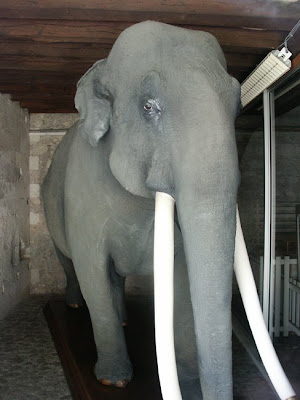 The second really big thing is a taxidermically stuffed Asian elephant. His name is Fritz, and he toured France with Barnum's circus. On 11 June 1902, he collapsed in the street outside Tours station, just as the troupe was catching the train to Saumur to put on a new show. Barnum, a consumate entrepreneurial opportunist, offered the beast to the City of Tours, pointing out that it would make a great tourist attraction if preserved (after all, Barnum was leaving town, and disposing of an entire elephant is a fairly time consuming and potentially expensive enterprise). They accepted and the elephant was sent to a taxidermist in Nantes tout de suite. Eleven months later he returned in triumph, transported up the Loire on the deck of a little steamboat.

His skeleton was preserved in the Museum of Natural History in Tours, but was destroyed when the museum was burnt down in the Second World War. According to the information board outlining Fritz's story, he was 80 years old and 3m high, with tusks 1.45m long and 5cm thick skin. His total weight was 7 750kg, with his skin alone weighing 1 100kg and each tusk 50kg.

Didn't Barnum donate a dead elephant to New York or some other American city? God forbid it was part of the marketing.....

Yes, this rings vague bells - obviously a tried and trusted early 20thC elephant disposal technique. I get the impression that Fritz was not a happy elephant when he died and was becoming difficult to control, but I can't believe his death was part of a conscious marketing plan. I hope just opportunism at work here.