Buildings on the Market Place - The Dressmaker

Numéro 8, Place des Halles, Preuilly sur Claise has long had occupants selling goods that provide colour and fun in our lives. Now it is the shop window for the couturier Patricia Martin's workshop, but in 1920 it was occupied by a travelling showman. 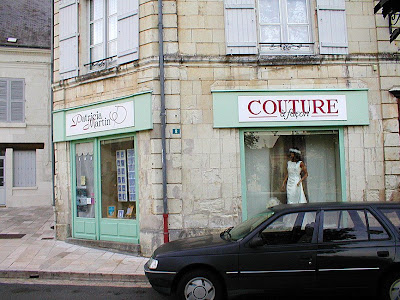 According to Roger Lezeau, Monsieur Lechippre was, by vocation, a travelling salesman. He sold trumpets and tin drums and children's flutes (mirliton) made of cardboard decorated with ribbons of multi-coloured paper which ran onto the lips of the budding musicians, and many other things more marvellous still at all the neighbourhood gatherings.

The preferred surroundings of Monsieur Lechippre were these festivals where one could ride on Lépine's merry-go-round with the barrel-organ that was decorated like a sultan and a sultana beating the measure to the sound of 'On the rolling sea, to the murmur of a perfumed breeze' (Sur les flots berceurs, au murmure d'une brise embaumée)...more often a flood of droppings from the goats that towed the merry-go-round.

But there wasn't a gathering every day, so between each of them Monsieur Lechippre stayed in his shop as if it were a penance. There he sold hairpins and combs displayed on cards carrying the words 'top quality' (extra qualité). He also sold squibs for 14 July and papier maché masks for Mardi Gras. He had 'sans état d'âme' three sons and two daughters. (I think this is meant to indicate that the children were either illegitimate or he did not have enough income to support them all properly - the expression means something like 'heartlessly' or 'without scruple'. One of our French speaking readers will no doubt help me out on this one.)

(Roger Lezeau's anecdote translated by me from his article in Les Cahiers de la Poterne, No34. Monsieur Lezeau was born in 1912 and is a great source of knowledge about the history of Preuilly.)

I assume Mme Martin is considerably more respectable than Mr Lechippre, but she too makes and sells items for dressing up and having fun in. I am looking forward to being able to place an order with her -- I see her clothes from time to time and like them very much (the simple but elegant wedding dress in this photo is quite plain and dull compared to some of her outfits, and I like a bit of colour and decorative stitching, me.)

And now for one of those neatly worded aphorisms (or maybe cod philosophy) that on first reading sound really good, but soon reveal themselves as utter tosh. Thanks to Wordsmith: Time is a dressmaker specializing in alterations - Faith Baldwin, romance novelist (1893-1978)
Posted by Susan at 10:00