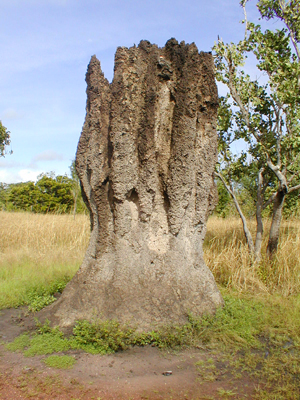 These two giant mud structures were made by termites in the savanna woodlands of the Northern Territory of Australia. These ones, with their buttresses, are known as 'cathedral mounds' and are made by Spinifex Termites Nasutitermes triodiae.  Other termite species in the area build tall narrow mounds aligned north - south, and others live underground or in trees. The termites that live in mounds like this are not the sort that will invade and eat your wooden house, although these species occur in Australia too.

Termites and ants are the most abundant insects in the savanna. The savanna would not look as it does without the termites. They are herbivores and consume vast quantities of grass and wood. The savanna supports a far greater weight of termites per square kilometre than it does cattle, despite this being considered good cattle grazing country. Termites live in colonies, with a queen served by workers and soldiers. The workers are adapted for either foraging or mound building, the soldiers have different weapons at their disposal (some use chemical substances, others have pincer like mandibles). The secret to their success is that they can digest cellulose and lignin from the plants they harvest. These tough parts of the plant which give it rigidity are indigestible by most herbivores.

Termite colonies last for the lifetime of their queen. The soldiers and workers only have a lifespan of a couple of years, but some evidence suggests that a queen could live 100 years. While the queen lives the mound is maintained. Unfortunately because of the continual running repairs and internal remodelling it is impossible to date termite mounds using a cross-section, as there are no 'growth rings' like there would be in a tree for example. A mature mound is about 5 metres high and may contain millions of individuals.

The insulated termite mounds serve to control the insects' environment in hot dry conditions, allowing them to live in a humid microclimate. It is believed the large buttressed or fluted structures of the cathedral mounds allows better ventilation for the storage of the termites grass forage.

Periodically the termites produce a generation with wings and they swarm and mate, simultaneously providing a feast for ants, small mammals, birds, spiders, frogs and lizards in the area. The mound itself is full of nutrients which get cycled back into the soil, and the termite activity is extremely important in dry environments which don't suit bacteria and fungi in terms of breaking down dead plant material. In Australia termites are probably particularly important because there are no great herds of migrating grazers such as there are in Africa.


My Dad by one of the termite mounds. 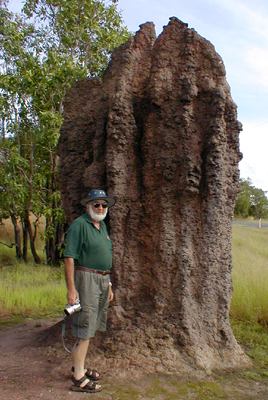 Back from Babylon: We returned yesterday from a week in Paris. We have seen the Beast of Turin and many other wonders beside. Blog posts to follow, naturally.
Posted by Susan at 09:00

Now that is a termite mound!!

Indeed. And it used to be bigger. I think it has been abandoned and is slowly being weathered away.

So are you and Simon happy with your $32M purchase ? Guess, you know what i am referring to and hopefully you saw it at the show . Awaiting for your post on it :-)

We attended the auction briefly, but only for the sale of Mrs Cooper's Mini. Bernard, our relief driver, was there for the biggie, but mysteriously failed to bid on our behalf...