The marble tomb effigy (Fr. gisant) above currently resides in the Church of St Denis in Amboise. It is known as la Femme Noyée ('the Drowned Woman') and there is a persistent story that the life sized figure is that of an unnamed female member of the Babou family who drowned in the Loire.

It dates from the 16th century and came originally from the crypt of the chapel at the Chateau of Bondésir in Montlouis sur Loire. The crypt was the mausoleum of the Babou family of the Chateau of La Bourdaisière but when the priory at Bondésir was closed in 1770, the chapel was also closed and the funerary monuments moved to Amboise. She seems to have already been in a worrying state of deterioration when she came to Amboise, due to the dampness of the underground crypt at Bondésir. Once in Amboise she was moved from place to place a number of times, at one time possibly in the collegiate church of the chateau, then in Notre Dame en Grêve (now dedicated to Saint Florentin) in 1828. Around 1864 the Inspector General of Fine Arts for the region saw her and was so worried by her condition that he had her moved to the chateau. It is not known when the damage to her face, hands and forearms and feet occurred, but the main ongoing problem seems to have been damp and the surface proliferation of mineral salts. In 1896 she was moved to Saint Denis, to a position more reminiscent of her original situation in the crypt of Bondésir.
I am extremely dubious of the effigy's provenance as a drowned woman. The sculpture appears to be remarkably similar to one of Catherine de Medici in the royal necropolis in the Basilica of Saint Denis in Paris. The pose is more or less identical and the state of the corpse much the same. Both are representations of old women it seems to me, not decaying corpses with their innards removed as is often the case with medieval and renaissance tombs. Their purpose is nevertheless to indicate humility, a submission to God's will at the end of life, and the hope for salvation. I would say it is quite likely that the 'drowned woman' is Marie Gaudin (1490 or 1495 - 1571 or 1580), the wife of Philibert Babou, Treasurer to François I, and that one sculpture may well have influenced the other. The 1897 account in the archives of the Archaeological Society of the Touraine of the 'drowned woman's peregrinations notes a resemblance to the effigy of Claude of France in the royal mausoleum of Saint Denis, Paris too (despite which they still seem remarkably attached to the drowned woman theory). Unfortunately Claude's full effigy is very difficult to see and I only have a photo of the base of her bare feet. You can see a better photo, showing her upper body, on this website.

I think the notion of the drowned woman owes much more to 19th - early 20th century obsessions with objects like the supposed death mask of a young woman known as l'Innconnue de la Seine. The death mask has mysterious and obscure origins, but that didn't stop a back story for her building up which proved irresistable to artists and romantics of the time. According to the story the young woman committed suicide by throwing herself in the Seine some time in the 1880s.

These 16th century effigies may not show beautiful young women, but they are very striking images of serene old age. They are certainly less gruesome than many from this period and earlier. In the second half of the 16th century it seems to have been a personal choice how graphically one portrayed the inevitable corruption of ones flesh after death.


Funerary monument of Catherine de Medici as a corpse in Saint Denis, Paris. This is the second version of the effigy, dating from the 1570s, as Catherine rejected the earlier one as too emaciated and macabre. 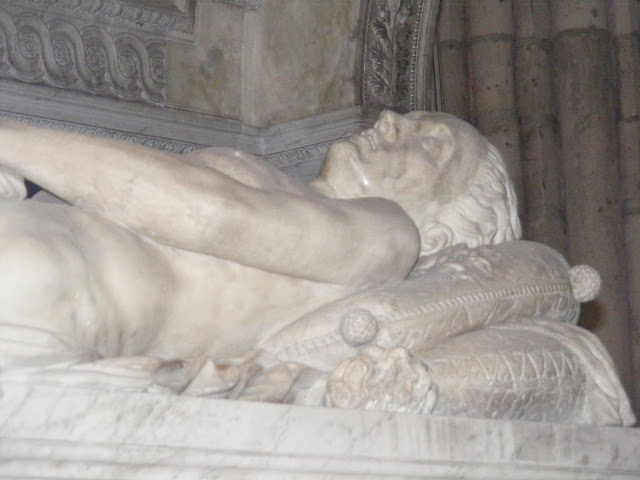 My thanks to Rosemary K, who was the only one of us to take a photo of the 'drowned woman' when a group of us visited Saint Denis specifically to look at the funerary monuments. Rosemary has kindly allowed me to use her photo for this post.

I've written about other remarkable funerary monuments in Saint Denis here and here.
Posted by Susan at 09:00