Saint Denis in Amboise is a Romanesque church dating from the very early 12th century. It was enlarged in the 16th century and extensively renovated in the 19th century. 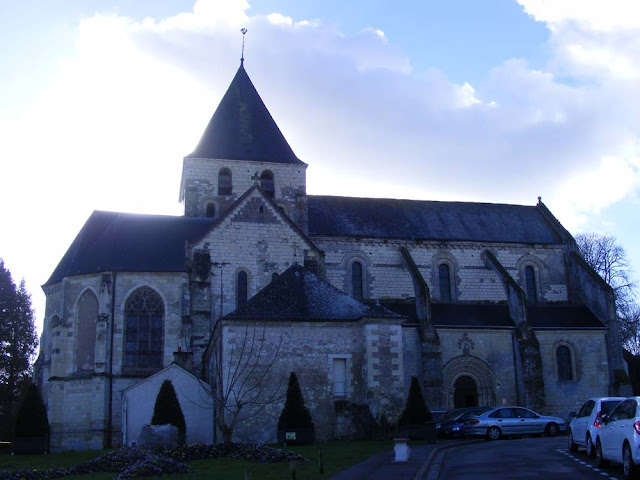 Saint Denis is apparently 70.10 metres above sea level (Fr. 70.10 au dessus du niveau de la mer) according to this plaque by the door. 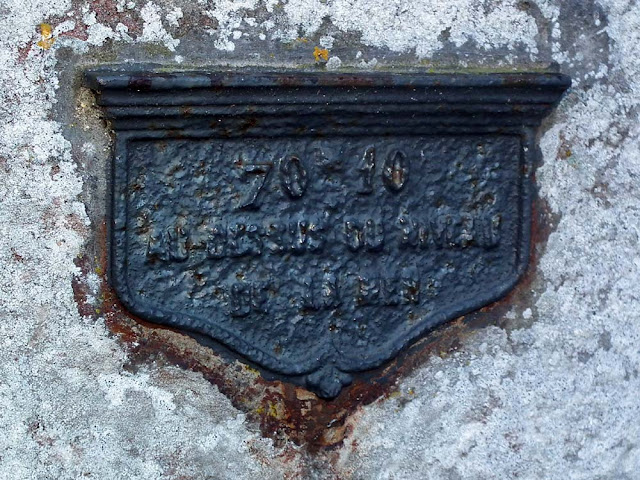 The view from the church to the chateau. 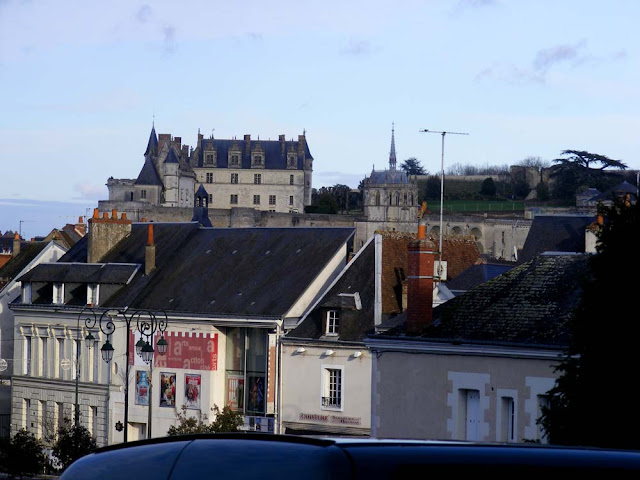 Below: Looking towards the apse, which is filled with an enormous 17th century altarpiece. In the centre of the choir hangs a crystal chandelier, a gift from the Algerian leader Emir Abd-el-Kadr in 1853. He had been held under house arrest in the chateau from 1848 to 1852. 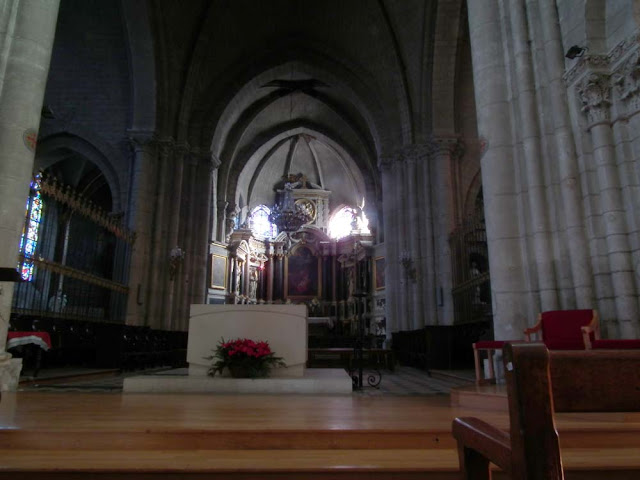 The capitals date from the 12th century. They are particularly fine and depict foliage, monsters and fantastical animals, legends and historical events. 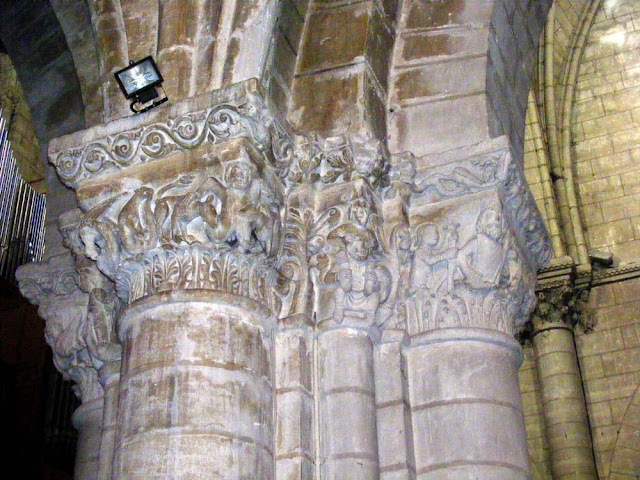 On the left of the capital two devils seize a pot-bellied sinner to drag him off to Hell. 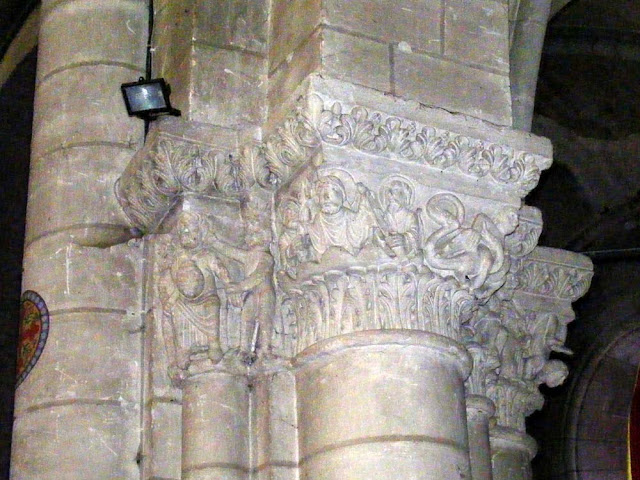 A girl doing a handstand on one of the column capitals. 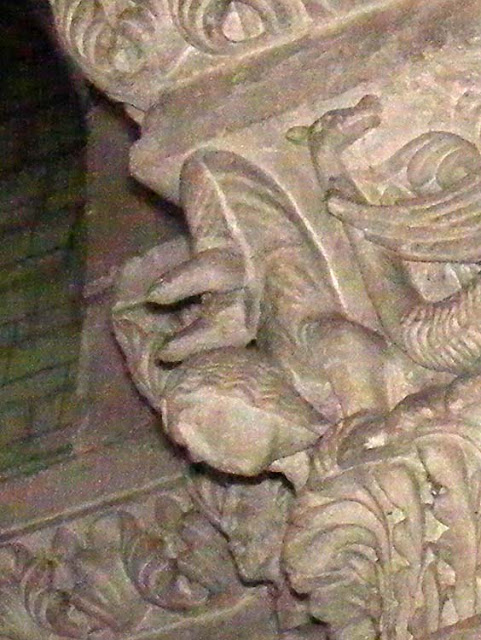 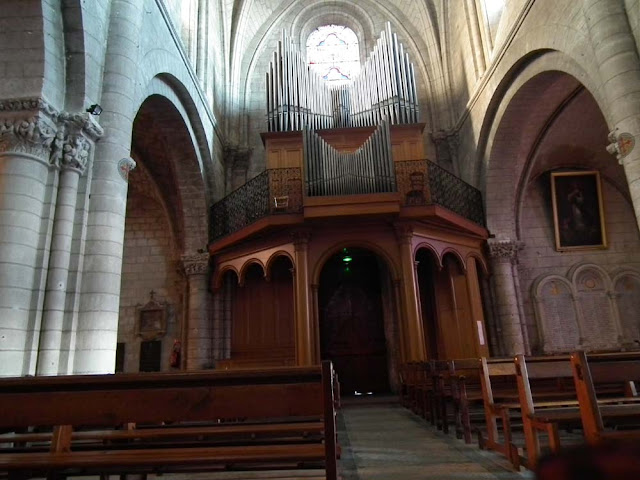 The side chapel dedicated to the Virgin Mary features two 19th century wall paintings. The one below is of Jeanne de Valois, the unfortunate youngest daughter of Louis XI and first wife of Louis XII. When Louis XII became king he wanted to discard Jeanne in favour of Anne de Bretagne. In order to ensure an annulment was granted to the thus far childless marriage he publically claimed that Jeanne was so ugly, deformed and mentally handicapped that he found it impossible to fulfill his duty as a husband and there would therefore never be an heir to the throne, a disaster for the monarchy. Jeanne fought back in spirited fashion, reminding the court of the time Louis had boasted of 'performing' three or four times in one night, but it was to no avail and she was put aside. 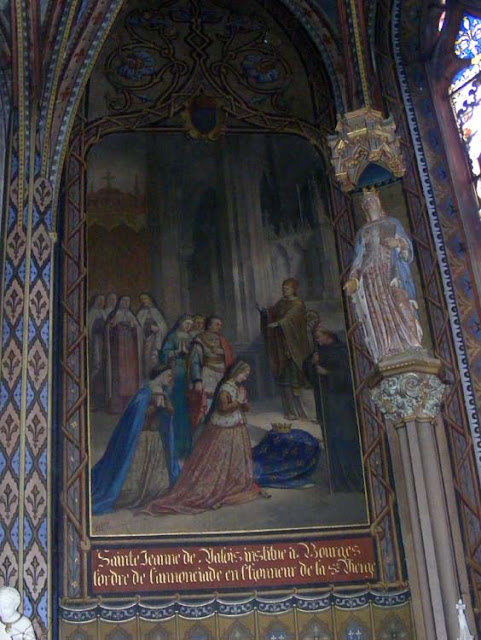 A 19th century stained glass window dedicated to Saint Vincent,
probably by the well known workshop of Lobin in Tours. 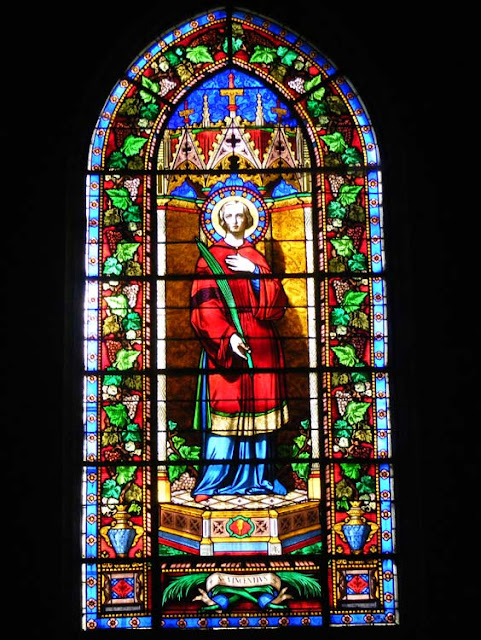 From his pictures, Louis XII doesn't appear to have been any prize himself. At least he didn't take the Henry VIII approach to spousal change.
That's a glorious stained-glass window.

Louis XII strikes me as considerably more handsome than his two immediate predessors. Jeanne went on to found an order of nuns and was probably well out of it. The stained glass window is 19th century -- meh...Not a patch on a 16th century window.

It was not good to be a woman back in those days ...

It wasn't really any better being a man. The period was extraordinarily violent and cruel.