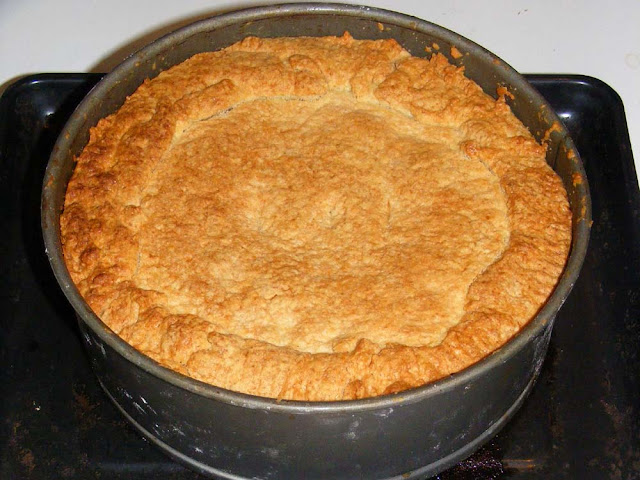 In late January I went on the annual hibernating bat survey. As usual we shared lunch together at Jean Claude's house and it was all very convivial. French bat surveyors naturally have a three course lunch with wine. We started with kir for aperitif. Bread and red wine was put on the table, then salads and charcuterie, followed by cheeses. My contribution was dessert and I made a recipe I got from David Lebovitz's site called French Apple Pie. 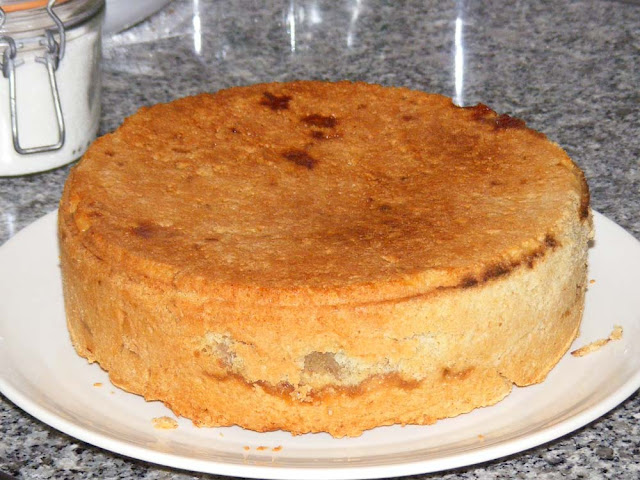 Jean Claude, bless him, got it straight away. When I told him the dessert was called French Apple Pie he immediately grinned and said 'Aha! So it has nothing to do with France?!' 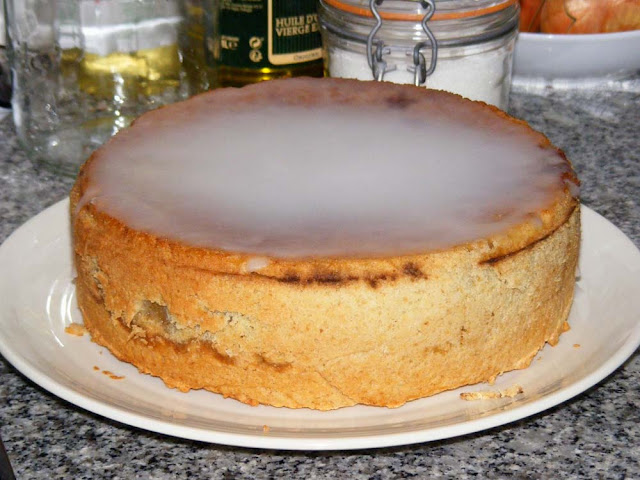 Simon and I have often observed this phenomena, and David Lebovitz remarks on it in his post too. If a recipe name includes a place, it invariably has nothing to do with that place and is unknown there. Feel free to list examples in the comments section below. Let's see how many we can come up with! 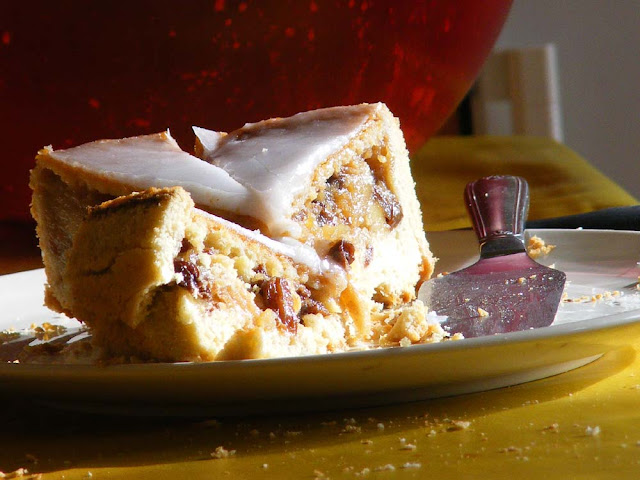 Despite its French free origins, the pie went down extremely well with the assembled bat surveyors, with several people having seconds. I used calvados instead of rum, and sultanas instead of raisins or currants (I've never been able to see the point of raisins or currants when you can get sultanas, which are so much nicer.) I used a mixture of two varieties of our homegrown apples, Golden Delicious and Jonagored. 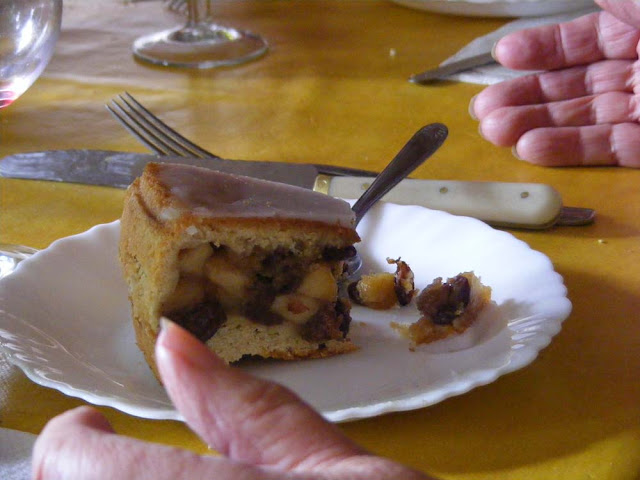 That looks a delicious dessert, a proper pie!
Know what you mean, if I think of any examples I'll add them later. I'm pretty sure that Yorkshire pudding and Yorkshire parkin don't count as they probably do come from Yorkshire.

Yorkshire pudding I wouldn't be too sure about. I reckon there's a good chance it's simply been adopted (but I haven't done any research). Parkin is certainly Yorkshire, but then, I don't recall seeing it referred as Yorkshire Parkin, just Parkin.

Another good example, as I mentioned on Wednesday, is Persian Love Cake, which is nothing to do with Persia.

The pie was really good.

How'zabout....
Creme Anglais....
That which bears as much resemblance to custard as Watneys ever did to beer!
Mind you.... Bird's Custard itself now looks closer to blancmange than it does to custard....
I'll have to invest in some natural yellow food dye for real custard colour...
And of course, I can make gallons of Creme Anglais from one tin....
half-a-teaspoon of powder to five litres of water should do it!

Welsh cakes, I believe come from Wales...or maybe similar cakes appear all over the world cooked on a griddle!

I make a lot of almond cake. If I'm serving it with an Italian meal I call it my Italian Almond cake, whereas with coq au vin it will be French Almond cake. Basically its the same cake!!

Ahem...as a chook owner with more eggs than you know what to do with, why on earth are you not making proper custard, from scratch?

love David L & his recipes, his books are fun to read

Who can forget "French Fries" which originate from Belgium :-)

and IIRC Beef Balti which started somewhere in Birmingham

I think you are right with Welsh Cakes actually being Welsh. I like your attitude with the almond cake :-)

Of course! French fries are probably the most famous example of this phenomenon. Baltis don't really qualify because a balti isn't a place, it's a cooking pot.

I like his books too, and he rarely produces a dud recipe.

Time!!
Far too great a phaff factor....
We are happy to do it for Ice Creams....
But suet puds require Bird's or Tinned Ambrosia!
Them thar chooks are currently off lay....
we had to BUY half-a-dozen!!
BUY!!!

There are also the supposedly place-specific recipes that were just invented for whatever, such as chop suey.
That pie/cake looks delicious.

Birds custard is the real custard in my book. It's what you put on your everyday apple crumble or steamed treacle pudding (made with golden syrup, not treacle).
Home made custard is posh custard, delicious but only for special occasions.

Not in this house! Custard is made with real eggs and real vanilla or we go without. Birds custard isn't inedible by any means, and what my Mum served when we were kids, but decades ago I got out of the habit of using it for some reason. Posh custard is when I replace some of the milk with cream.

Re treacle: I'm sure in the UK you used to be able to get what I would call treacle (like heavier golden syrup, but not molasses, which is what 'black treacle' actually is). None of it is reliably available in France, and I wonder why there is no tradition of using thick sugar syrups here too.

Baltis come under that heading, as does Chicken Tikka Masala.

I think the lack of ready-made thick sugar syrups in France has to do with the fact that French desserts are not nearly as sweet as English ones.

"Frenching" or "French-cut" refer to the technique of slicing what you are cooking, I believe, not geographical origins. In the US we have French-cut green beans, which are haricots verts where each bean is cut in half the long way, making them thinner and more delicate. We also have something called French dressing which in no way resembles vinaigrette, at least not in the store-bought versions. And we have French toast, which is pain perdu.

Do you think so? I can't say I've noticed such a distinction but you could be right.

I think people in Baltistan might disagree - the area that runs from near K2 in the Himalayas across to the northern reaches of Afghanistan. They do the kind of recipe - somewhat modified - which went into the Balti curries. They're not as spicey hot.

'French-cut' is a term I'd never heard until I started reading food blogs written by Americans so I think it qualifies. I think in Australia French dressing would be recognisably vinaigrette (although supermarket dressings of all sorts are always a bit off the mark, especially the ones that don't require shaking). In the UK it would probably just be called vinaigrette. French toast is often called eggy bread in British English. It's hard to tell where it originated.

I never realised it was a place! The story one always hears in the UK is that it is the cooking pot.

In the U.S., French dressing is red or orange in color. I think originally it was a vinaigrette with a lot of paprika and a little bit of sugar in it, but the commercial brands add a lot more sugar and probably some ketchup or other form of tomato.

Blimey! In Australia and the UK French dressing would definitely not be orange, and would be recognisably some sort of take on an emulsion of oil and vinegar. If it had tomato in it I'm sure they wouldn't call it French dressing. It could have assorted herbs and spices though.