Back in October last year I blogged about the Chateau de la Bourdaisière. In the course of researching the blog I encountered tantalising hints that there may be a statue modelled on Marie Gaudin, the beautiful chatelaine of La Bourdaisière in the 16th century. At the time I was unable to ascertain if the statue still existed and if so, where it was. Luckily a blog reader provided the answer for me and as a result I was determined to visit Saint Denis' church in Amboise, which is where the statue has ended up.

Saint Denis turns out to hold all sorts of treasures, and I thought it would be a nice outing for a group of friends to enjoy together. We picked up Antoinette and headed off for Amboise one winter Saturday afternoon. Meeting us at the church were Rosemary and Jean-Michel who drove over from Blois, and Janet and Antoine, who walked from their nearby home in Amboise. The church did not disappoint and we had a most interesting time. 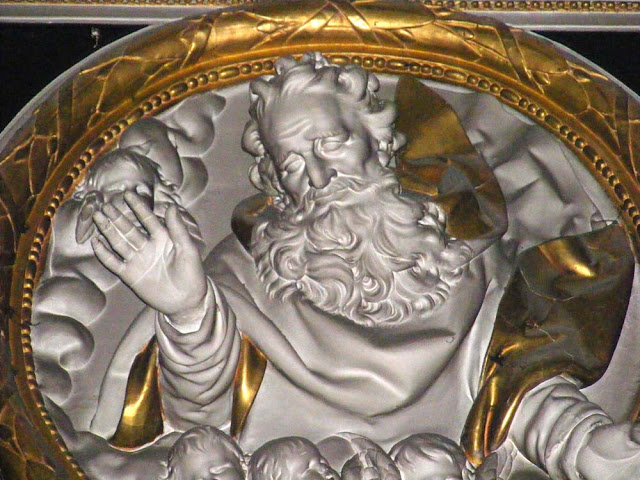 The blog reader, J-L M, who had sent me off to Saint Denis in the first place had mentioned that the altarpiece (Fr. retable) was worth looking at, so after checking out the funerary monuments which the main reason we were here, we went to admire the altarpiece.

The first thing that strikes one is that it is huge and very Baroque. It was difficult to date. My initial reaction was that it was 17th century, but we knew the church had been extensively renovated in the 19th century and some of the altarpiece looked a bit suspiciously 19th century Baroque Revival. 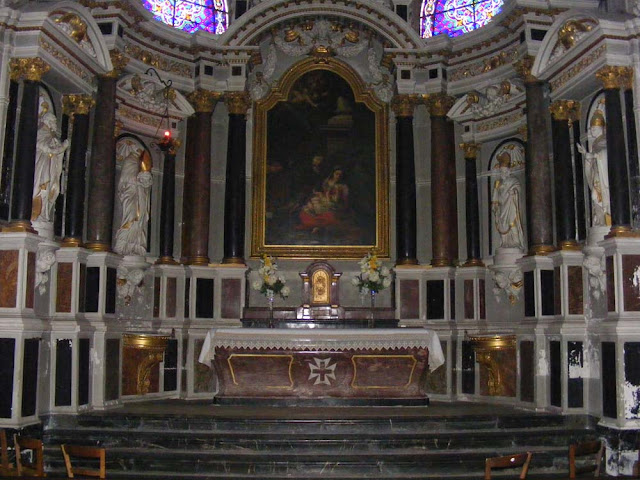 Then we spotted a beardy bloke delivering a blessing from on high. Much discussion about who he was ensued. It couldn't really be God himself could it? I suggested Moses as his hairstyle could be interpreted as concealing horns, but there were no tablets. Rosemary suggested Saint Peter, but he wasn't holding a key. None of us bothered doing anything sensible like properly reading the blurb in the info folder at the back of the church (well, actually I did eventually glance at the page on the altarpiece but gleaned no more than that it dated from 1702). The truth is we were all having too much fun speculating and talking amongst ourselves.

Once home I check out the official Listed Monuments entry for the altarpiece and discovered that the bearded gentleman is indeed God and the altarpiece is indeed mostly 17th century. Apparently the Council of Trent in 1563 had reaffirmed traditional Catholic doctrine that depictions of God were not controversial, but they remained relatively uncommon, and artists were nervous about showing God's whole person. Normally he appears, as here in Saint Denis, as no more than an upper half.


The Holy Family by Claude Vignon. 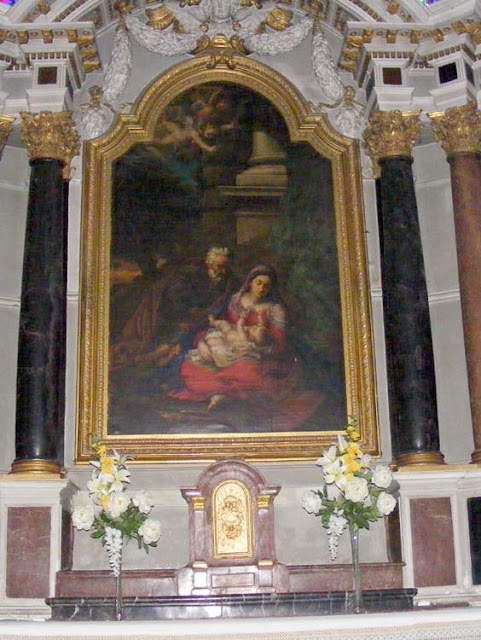 The altarpiece is semi-circular, with the central painting above the altar of the Holy Family (resting during the flight from Egypt) by Claude Vignon (1593 - 1670). Above the painting, inside a gilded wreath between multiple columns, is the high relief sculpture of God. The curved sides of the altarpiece are richly decorated, alternating statues and columns. On the left the figures are Saint James and Saint Denis (holding his decapitated head in his hands); on the right the figures are an Archbishop of Tours and Pope Urban VIII. Above them are two angels at prayer, adoring God in the centre.

My friend Rosemary deserves the credit for the title of this blog and has written her own account of the visit.

I think the expression on God's face is wonderful!!
"If you've been to confession my children... all is OK!"
or
"Chill out and enjoy!"...
You can see the Gallic Shrug....

You don't think he's been helping himself to the communion wine do you? (I know -- cheap shot...)

Possibly...but...
No, I think someone's been paying around with the contents of the inscense burner!!