The Lia Madonna by Francesco Galli 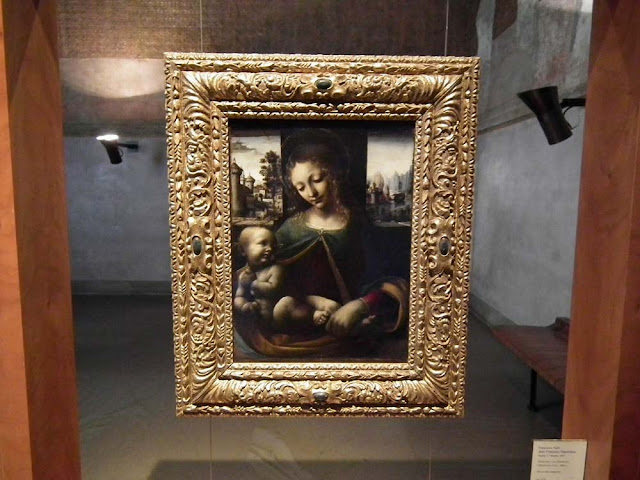 Looking at this lovely Madonna and Child hanging in the Castello Sforzesco you would be forgiven for thinking it was by Leonardo da Vinci. And there is a reason for that.

The artist, Francesco Galli, known as Francesco Napoletano, was an early pupil in Leonardo's workshop in Milan in 1490, and one of his most talented apprentices. Very little is known about him. His family was from Naples, but it is not known where he was born. He seems to have died very young, of plague. More than half of his surviving works are Madonnas. This one seems to be the best known.

It was painted on board around 1495. It went to an unknown buyer in Milan. By the 18th century it had found its way to France. (I wonder if perhaps it went to France not many years after being painted, during the years of the French occupation of Milan.) Eventually it was bought by collector Armedeo Lia and came back to Italy. He donated it to the Sforzesco in 2007.

The style and setting of this Madonna shows the strong influence of Leonardo (check out the Virgin of the Rocks by Leonardo at the Louvre, for instance). The Madonna's cloak envelopes the baby Jesus and spills over the border. Galli has followed Leonardo's advice about depicting people in the special light provided by bad weather or the evening time. The wall behind the Madonna and the shadows are very dark, setting the figures and the background architecture off dramatically. The scene in the background left is significant because it shows an early version of the Castello Sforzesco and some of the defensive features designed by Leonardo, the earliest indication that they were actually built and not just on paper. When the Castello was restored in the 20th century the architect responsible used this image as a guide.

It is displayed in this unusual way so you can see the back of the painting. Hand written there is a note in French which reads "Out of the wooden board in 1758 where it had been painted by Leonardo da Vinci in 1515 and carried on this canvas Picault painter employed by the King" (not my translation and I foolishly failed to take a photo of the back...). This refers to a restoration by Robert Picault (1705-1781) in an attempt to save the work which was evidently in a parlous state. Interestingly, reference is made to the fact that the work was painted by Leonardo da Vinci, an indication that his Neapolitan student had attained the skill of his master.

A la cuisine hier: Preserved Orange Peel, which scented the house deliciously and will be used over the coming months in cakes and chocolate nibbly things and the like. The peels have been festering in their curing mix of salt and sugar for rather longer than necessary, but I finally got to it to yesterday to do the candying stage.

Jamaican Curried Prawns, using a curry mix that I make up and have on hand in case I can get hold of some goat meat. I used half a cayenne chili. I only had coconut cream, so this wasn't exactly the lo-cal recipe the original intended. I upped the quantity of red pepper and onion too.  We both agreed it was rather good.

Stewed apple and blackberries from the freezer, served with fromage frais battu, a delicious product that our laitière delivers.
Posted by Susan at 09:00

It could of course have arrived in France with Leonard of Vinci...
especially if he also felt that Francesco Galli was the best of his "flock"!
A souvenir....
and also quite good to have if you wanted to show someone your defences as built elsewhere!!

I think it is possible but unlikely that Leonardo brought it. I suspect it was already in France by the time Leonardo arrived, brought some years earlier during the time of Louis XII and because of his defeat of Ludovico il Moro and the occupation of Milan. Leonardo did not own the painting, it went to a private Milanese patron when it was finished, so there is no reason for it to be in his possession when he came to France. It is always possible that Ludovico himself was the private Milanese patron, and that he brought it to enliven his days in a French prison.

Yes, Leonardo da Vinci comes to mind right away. Colors are rather dull, but it's still a very nice painting and a very traveled one!

i have tried to do candied orange peel maybe 3 times, never very successfully......my great grandmother used to make lovely ones

This batch is rather soft because they cured for months rather than weeks. I always keep them in their syrup, and to be honest, having the syrup is the best bit.