The Beast of Turin (otherwise known as the Fiat S76) was at Retromobile this year, along with a couple of other world land speed record cars.

The 1903 Napier, a 7.7 litre 4 cylinder car, the oldest surviving British race car.
You can read more about it here. 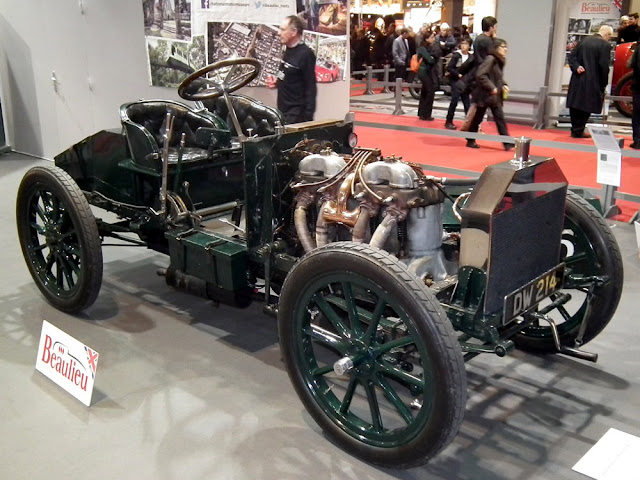 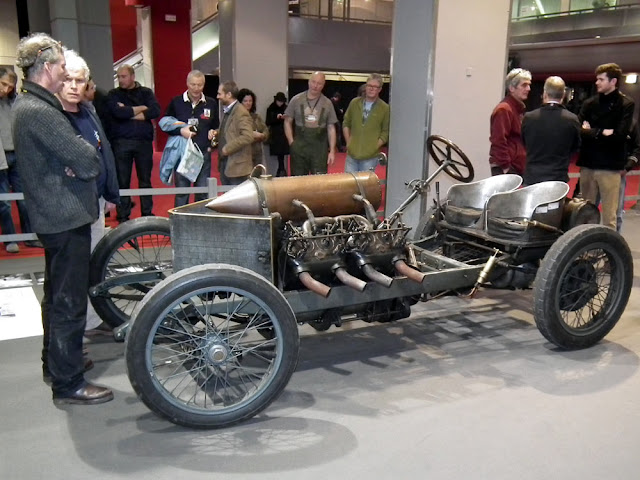 The Beast of Turin. This record-breaking car was designed by Fiat in 1911 specifically to beat the land speed record. Italian engineers mounted the engine – which was originally designed to propel hot air balloons – on a chassis and then built the car around it. 4 cylinders, 300 hp at 1900 rpm for a weight that was not far off a tonne, and a total engine capcity of 28.23 litres (1,730.2 cubic inches). The car managed more than 210 km/h in December 1913 in Ostend. For more on the beast, the Goodwood web site is pretty useful. 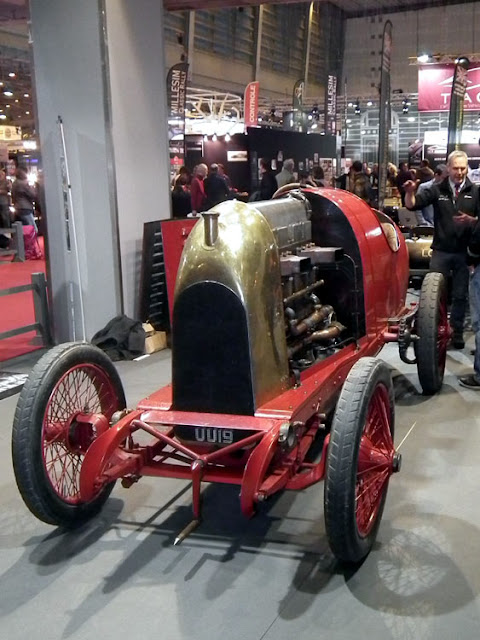 The Fiat and Darracq were started while we were there. I have video, but it is a bit dark (but all the better to see the exhaust!). Stand back or you'll get your eyebrows singed and your eardrums pierced (watch people recoil in the video!)

Car News: Célestine was delivered to the mechanic yesterday. She has a clunk front driver's side that we don't like the sound of. The mechanic doesn't have time to look at her this week, but will do so next week and give us his verdict (and price).

A la cuisine hier: Pasta with creamy tomato sauce, made by combining a tin of tomato sauce with a half pot of leftover cream. A few lardons and some good quality Parmesan cheese, et voilà!

Beef in stout stew and mash from the freezer, served with steamed broccoli. Rhubarb and apple flapjacks from the freezer to follow. Served with a glass of Chateau Gaudrelle sec tendre 2009 Vouvray, which went remarkably well.

Loire Valley Nature: A new entry for Choke Epichloe typhina has been added. This relative of Ergot will weaken pasture grasses, but not cause the outbreaks of disease that Ergot still occasionally does.
A new entry for the commonest moss on Earth, Cypress-leaved Plait Moss Hypnum cypressiforme, has been added.
Posted by Simon at 09:00

I wouldn't call the effects of Ergot a disease...
It is a poison, a hallucinatory drug!
I couldn't see people recoiling when the Beast was started up...
it was too dark....
and the tiny little speakers on this iPad are useless for anything that should sound real!!
I'll watch it again over in the office...
Bigger screen, bigger picture....
Real speakers, real sound!!

I like the sound of beef in stout....
We've some Jarrett on t'bone...Guinness sounds good!!!

The two rows of people in front of Simon disappear and people block their ears and move. Don't worry about trying to get better sound. Unfortunately the camera microphone is also little and didn't capture the full magnificence of the roar.

OED definition of disease: a disorder of structure or function in a human, animal, or plant, especially one that produces specific symptoms or that affects a specific location and is not simply a direct result of physical injury.

I think the beast uses compressed air to start - certainly there was a lot of pumping on the offside before she kicked over. The Darraq is hand cranked.

The people in front of me didnt move because if the noise, they moved because of the sheets of flame coming out of the exhaust. (I reckon that Célestine could travel the same distance as the beast - just on the fuel it doesnt burn...)