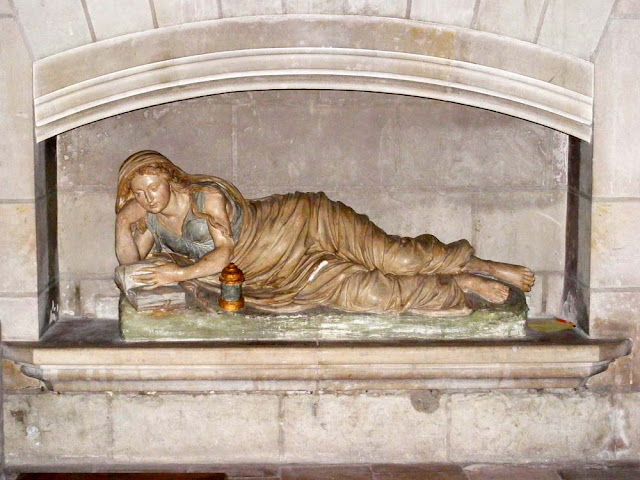 There are quite a few images of women reading that date from the 16th century, and this one is a charming example. Middle and upper class women could almost all read by this time, and reading for pleasure and the gaining of knowledge was encouraged. Mothers were expected to ensure their daughters were taught to read because the Virgin Mary was taught to read by her mother Sainte Anne.

The sculpture is in painted limestone and represents Ste Mary Magdalene, with her flask of aromatic oil that she will use on Christ's body after it is taken down from the cross. Mary Magdalene is depicted life size, as a pretty young woman with loose hair tumbling over her shoulder and diaphanous drapery revealing every curve. She looks absorbed and contented.

In the New Testament she is mentioned more than any other female follower of Jesus, and there is no indication that she was a prostitute. Quite the contrary in fact, and she is important primarily for being the first person to encounter Jesus after his resurrection, referred to as the 'Apostle to the Apostles'. She is the second most depicted female Biblical character after the Virgin Mary. However, from the early days of the Catholic Church, she has been conflated with several other characters named Mary and is a composite character representing temptation and reformed sinners. The representation here is of the type known as the Penitent Magdalen, where she is wearing nothing more than an undergarment and flimsy drapery.

One of the stories associated with her is that she washed Jesus's feet and dried them with her hair. In the 16th century only prostitutes or aristocratic women wore their hair loose and uncovered. In the Medieval tradition she is a reformed wealthy hedonist rather than a prostitute. She is viewed essentially as a female disciple, and perhaps as more beloved by Jesus than his twelve male companions. The Penitent Magdalen became a very popular cult in 16th century France, especially after the Council of Trent 1545 - 1563, as she was an enticing example of repentance and a reformed character who piously disavowed the vanities of the secular world.

The book she is reading may not be the Bible, but is undoubtedly of a religious nature. It is a symbol of her committment to her reformed lifestyle and devotion to good works, and she is frequently depicted absorbed in a book, or in a moment of reflection whilst reading. The book also represents Christ himself, as the Word. It is also an opportunity for the sculptor to display his skill, in the delicacy of his rendering of the fingers.

Originally the scuplture graced a church dedicated to Mary Magdalene in Amboise but now it resides in a niche refurbished for her in 1975 when she was conserved. The Church of Saint Mary Magdalene no longer exists and she was brought to the church of St Denis in Amboise, her current location,  in 1896. She lies next to the Babou family tomb in the church of St Denis in Amboise, and is more or less contemporary with this sculptural group. She is also represented in the group of figures on the Babou tomb, but in a different incarnation, richly dressed.


Mary Magdalene as she appears on the Babou family tomb,
complete with gilded diadem.

Rosemary has blogged about the visit we made to Eglise St Denis with friends here.

To see my post about the third significant tomb monument in the church, known as 'the drowned woman', click here.
Posted by Susan at 09:00

Mary Magdelene reading a book is a funny anachronism, no?

No odder than Biblical characters wearing 16th fashion, and it's all to the same end -- to convey to the 16th century viewer who is who and the nuances of status.