On the heights of Amboise there is a spur of land with the remains of what was a Celtic then Gallo-Roman settlement on it. It is known as the Oppidum des Chatelliers and the settlement was at its height at the time of Caesar's conquest. The Bronze Age culture who lived here and other places in the Paris Basin are known as the Chassey people.


The cut through the bank. 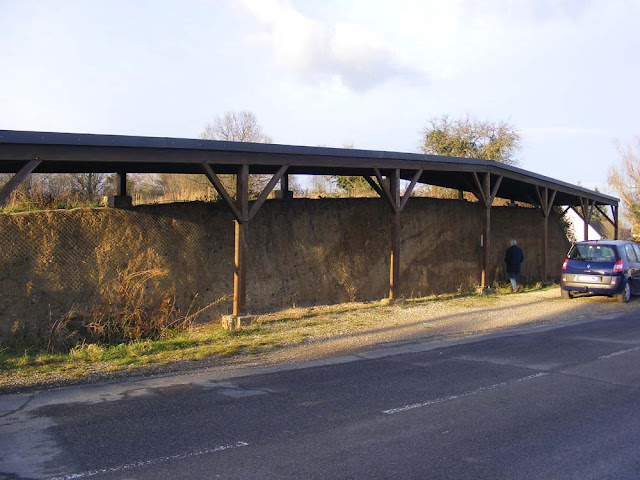 The most striking of the archaeological remains is the linear rampart, now cut through so you can clearly see it in section. It originally stretched 450 metres and was around 35 metres wide. Its height was once much greater than today. Its reduction was brought about once the plateau began being ploughed and cultivated. In front of the earth bank you can see a flat bottomed ditch.


Solitary bees have been taking advantage of the nice south facing
exposed earth to make their nest holes. 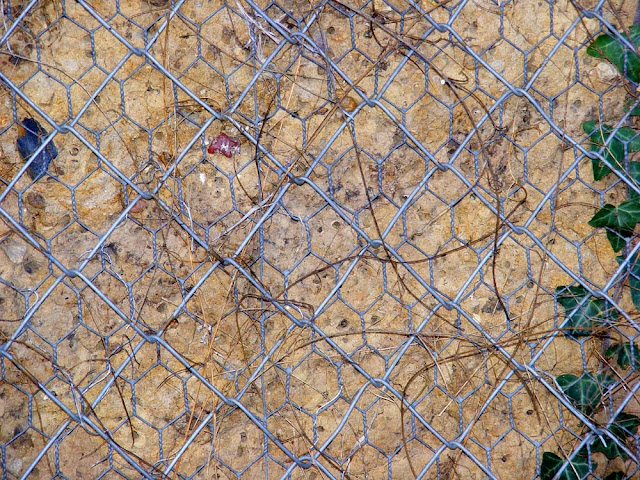 The earth bank, reinforced with wooden stakes, and surrounded by the ditch, would have been the main defensive element for a settlement called an oppidum in Gallo-Roman times. The very visible strata on the cross section shows that it was added to or had maintenance a number of times over its useful life. On the other side the settlement was protected by the natural cliffs which dominate the valleys of the Loire and Amasse Rivers.


The latest archaeological dig on the site, tucked up for the winter. 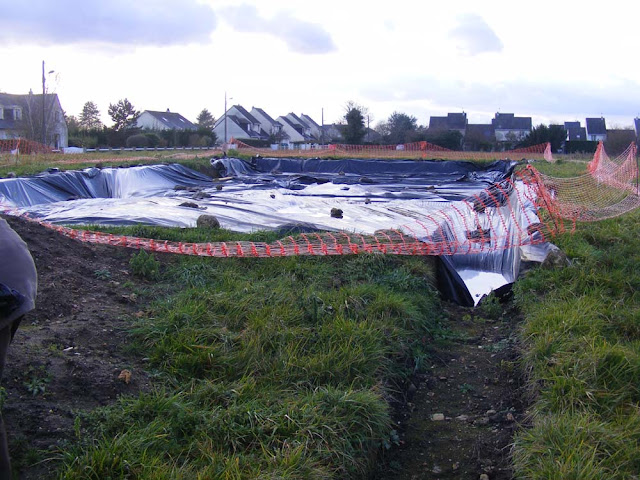 The Oppidum des Chatelliers was one of the most important cultural and economic centres of the region. It is also a very typical example of hill forts in the area, where a settlement on a spur above the river is fortified behind a barrier sectioning off the end of the natural ridge. 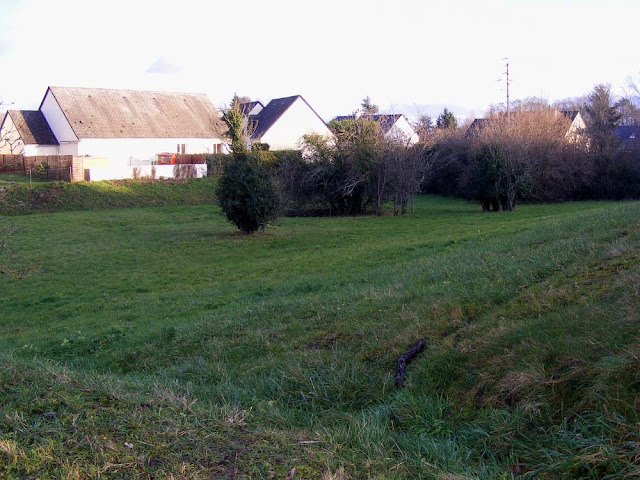 Archaeological research has shown that the site had a population similar to a modern small village and the bank and ditch were begun around 400 BC and finished around 50 BC. Two statues of human form, including an exceptional female idol, have been found on the site. Other finds include pots and Gallic coins.


In the middle of the site the tumulus known as la Butte de César. 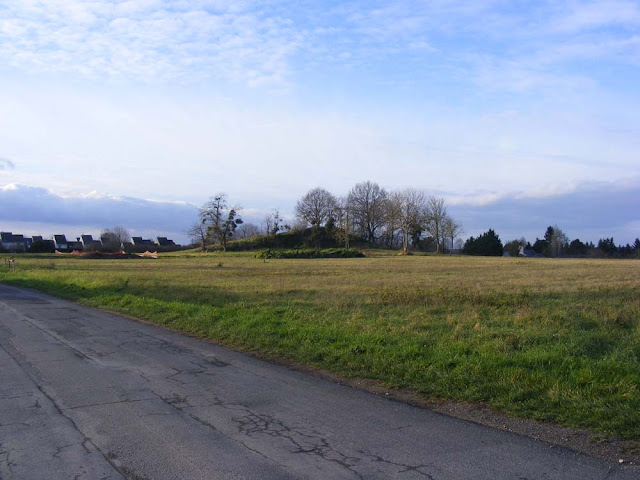 The strata of the earth bank, presumably laid down as the Chassey people
dug the ditch and formed the bank. 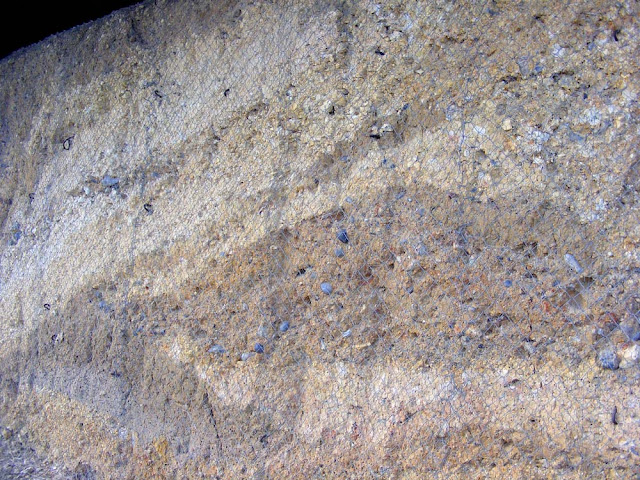 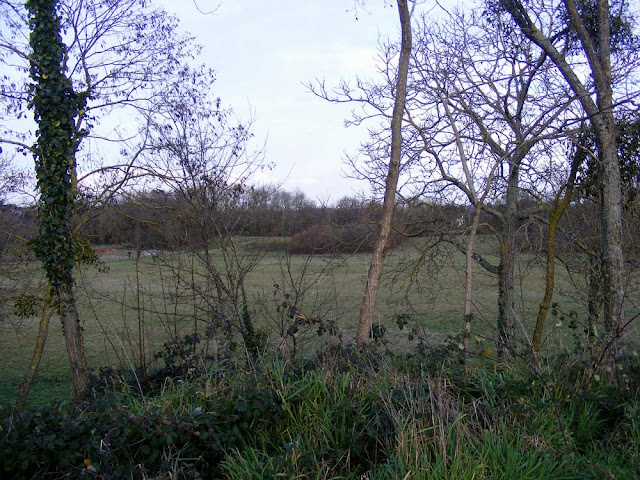 We visited the site in mid-January with friends Antoinette, Rosemary and Jean Michel. Rosemary's post about the earth bank is here.

Loire Valley Nature: A photo has been added to the entry for Large Skipper butterfly Ochlodes venatus.
Posted by Susan at 09:00

The construction in the second picture is the preferred way that the archeologists want to use on the Eperon de Murat...
for its entire length!!
Once they've felled and killed off all the trees, of course...
they can't dig the roots out without destroying the archeology...
everyone locally is totally agin'it... mainly because of the destruction of habitat when they bring in machines to do the construction.
And the actual cost in Euros... an estimate of 5 million!!
That will probably save the site from damage!!

Far out!! 5 million!! For a simple shelter a couple of hundred metres long!! There must be a compromise solution?

The five million quoted did cover the car park and the work on Murat itself as an "interpretation centre"....
and the foot path...wheelchair friendly...
they didn't give an actual breakdown at the "conference"... just mentioned that the work actually on the site would be the larger part.
My feeling is that the team that did the study and came up with the proposals had no knowledge of the natural importance of the site...
they were scribbling in their books as the naturalists gave their talk.
And M. Hainault was very derisory about the look of the "shelter" for the wall....
his mention of using grass seed on the mound....
and local labour to regularly cut the growth back...
as being "plus moins cher" for many, many years...
got vigorous nods and mumblings of approval.
Personally, I would like to see the footpath and benches provided, tho'...
then Pauline and I would be able to visit it again...
I don't really like going to places we both like and leaving her here!
But that I think might now be unlikely as it looks as tho' someone's bought Murat.

You mean someone's bought the farm? The Conservatoire owns the Eperon.

Yes... I think... There were people there in a nice new caravan all last Summer.... and rubbish was being put out at the end of the little road. Also the sign pointing to Murat had been straightened!!