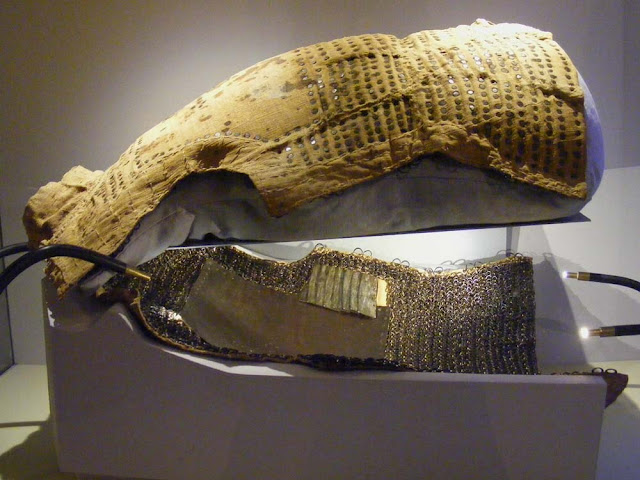 This object in the Castello Sforzesco in Milan is a very cleverly displayed gambeson. Essentially it is a medieval stabproof vest. You can see the outer surface of the front of the garment at the top, and the inner surface of the back of the garment below. It is designed to be worn as a protective garment on its own, or under plate armour and provides added comfort and protection for the wearer. It is made of canvas and mail. This one has additional metal studding and all the layers are stitched through like a quilt. Indeed I would expect it to have some padding and quilting, and it may also have arming points, for securing sections of plate armour.

Plate armour had known vulnerable points, where a properly trained swordsman with the right weapon could slip his sword in under the armour of his opponent. The gambeson made up for the weaknesses in the plate armour design, as well as acting as a shock absorber for blows from blunt instruments. Milanese plate armour, along with south German armour, was considered the very best at the time this gambeson was made.

Loire Valley Nature: A photo has been added to the entry for Ilex Hairstreak butterfly Satyrium ilicis. This is one of my favourite butterflies, partly because it has such a short season.
Posted by Susan at 09:00

All that equipment must have weighed a ton! Poor horses!

The bottom part looks like paille de fer, steel wool, to me.

A good suit of plate armour could weigh as little as 5kg. All the padded and mailed under garments weighed more. The weight was well distributed, and riders would have had good seats, which minimises the discomfort and effort for the horse.

And they rode Percherons or Suffolk Punch type animals...
Huge, tough beasts.... often armored themselves....and capable of incredible bursts of speed.
They could do as much damage to a man downed, or on foot,as the knight in rusty ardour on its back!

Oops! Just noticed a typo in my earlier comment. A good suit of armour could weigh as little as 15kg, not 5kg. The horses they rode were stallions, trained for combat. You need to think of both the horses and the knights as elite athletes.

I remember seeing that and being intrigued but I just read an extremely interesting biography about Catarina Sforza who was also countess of Forli and Imola. She had a stabproof vest too. She was quite small, it seems, so it must have been very heavy.

You mentioned Catarina Sforza in a comment on your blog so I looked her up. She certainly was formidable. I notice Machiavelli mentions her, listing her just as he would the other lords of the area.