According to the local paper the Département is ready to welcome the first refugees coming from Iraq, Syria and Eritrea. There is reported to be between 150 and 200 in number.

The French President has pledged to take 24 000 refugees from war torn Iraq, Syria and Eritrea over the next two years. That is in addition to the 6700 who have already arrived this summer. A month ago the Prefect of Indre et Loire called a meeting of all those who were likely to be involved in receiving the refugees so they could be fully informed. At the meeting it was envisaged that the Département would take 240 people. That number was adjusted last week to 150 - 200 people over two years. A government spokesperson said they will arrive in small groups of two or three families at a time. He was at pains to say that it wouldn't be busloads of fifty people arriving tomorrow, but the first are expected before the end of the year. Based on the experiences of other countries decades ago when receiving Vietnamese boat people, it seems to me that the authorities might be making a mistake in keeping the groups so small, especially when the families backgrounds might not be the same. Ten or twelve families at a time where possible works better because its too small a group to form a ghetto, but big enough to form self help support groups within the migrant community.


A Fox moth caterpillar with its smart livery of black pelt and orange trim. 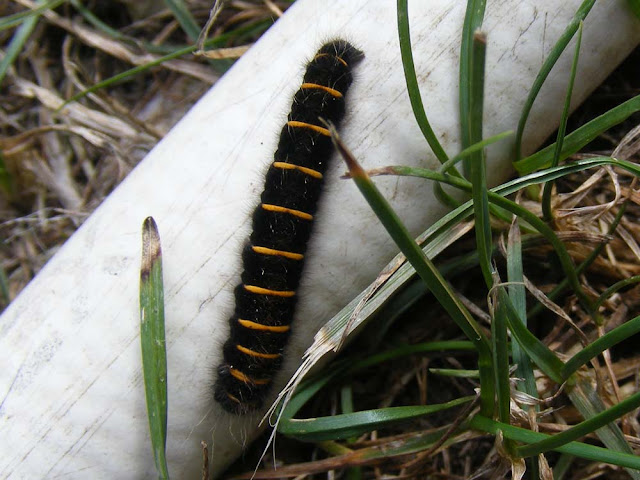 In anticipation of the refugees arrival the Prefecture has reserved 30 rooms in a hostel at Grandmont in Tours. This social housing project will act as a clearing house, where the refugees health and other needs can be assessed before they are transferred to long term accommodation. The towns of Tours, Montlouis, La Riche, Chambray, Preuilly-sur-Claise, Langeais and Chinon have already proposed accommodation. These include three social housing authorities and even some private owners with empty accommodation. All of these proposals will be checked and assessed individually. Private citizens are not encouraged to offer rooms in their own homes, as this is seen as too risky in the long term. Goodwill sometimes dwindles very quickly in these situations.

The Common Blue butterfly may be 'common' but it is still one of the most beautiful. 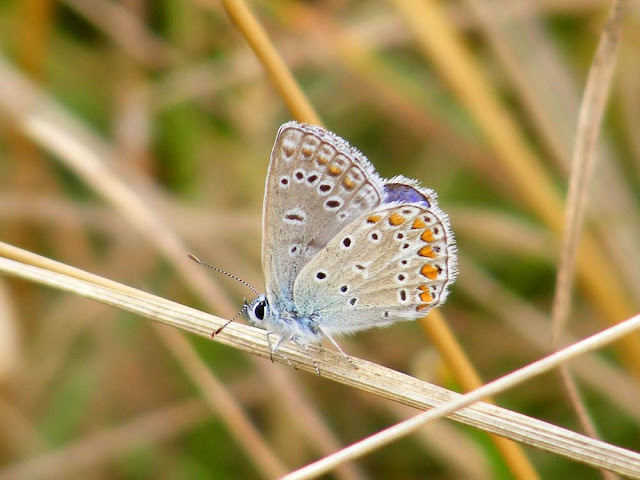 Each local council will receive a grant of €1000 per lodging put at the disposal of the refugees. Each refugee will get aid of €1500 to set themselves up in their long term housing.


A Grizzled Skipper, tiny and with a subtle charm. 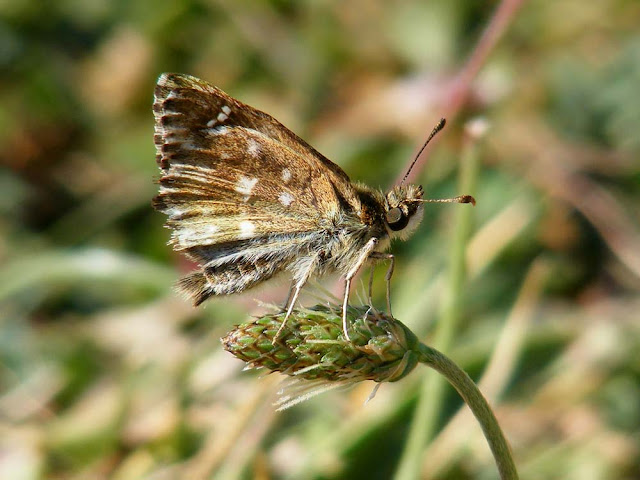 Another group of immigrants are those seeking asylum from Eastern European countries and the government authority responsible for asylum seekers is creating a new centre in Chinon next January which will have 80 beds. This will bring the Département's capacity to take 'classic' asylum seekers up from 260 to 340 people.


Looking up the gusset of a Jersey Tiger. The folds in the underwing are interesting. 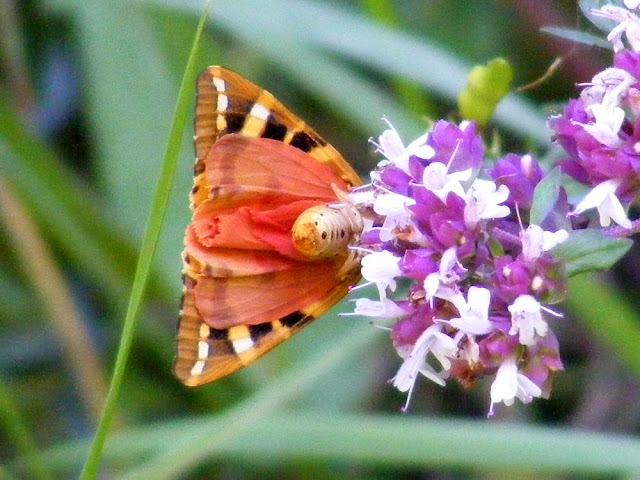 The last paragraph of the newspaper article is interesting, and reflects the difference between what I am seeing reported in the national and international press, compared to what I am seeing on the ground here. My translation below the next photo:


Male Long-tailed Blue butterfly on clover at the Chateau of Azay-le-Rideau. 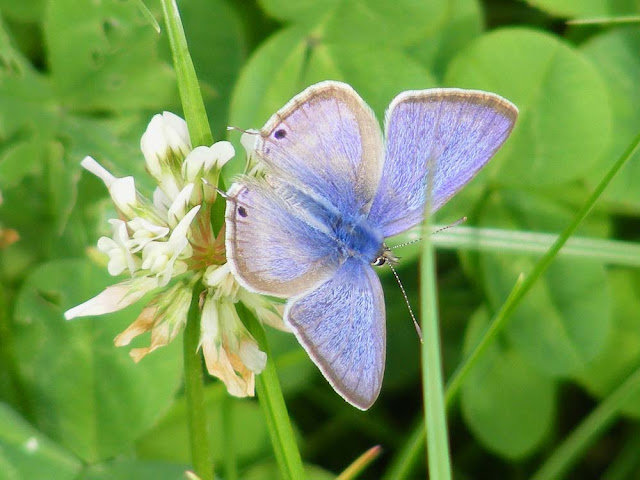 Far from the Parisian policies which see the distasteful swinging of the debate from the skin colour of some to pork meat in everyone's meals, Tours is trying to play a somewhat more humane game. The city has already received 130 refugees from Iraq and Syria and they are installed. The Département has said it is ready to welcome, as promised, 150 - 200 migrants fleeing war zones, in small groups over the next two years. It's a consistent gesture of openness and is accompanied by the task of not leaving these people homeless, so co-ordinating permanent housing for them. Only private individuals initiatives are being rejected, as the authorities fear that today's heartfelt desire to help may not last.

Swallowtail caterpillar taking a rest from munching on Wild Carrot in our orchard. 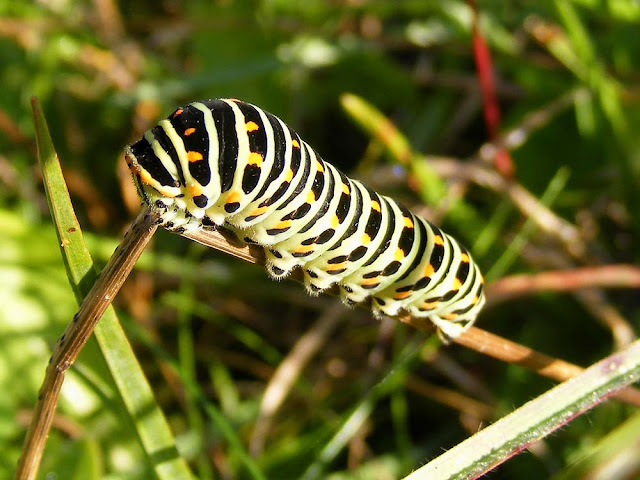 The photos have nothing to do with refugees. I couldn't think of a sensible way to illustrate this post, so I've just put nice wildlife photos in.

I can think of some perfect housing al little over 5 kilometres from where I am sitting...
L'Hotel "Sans" Esperance.... the "Sans" is my insertion...
it has been "A Vendre" since before we bought La Forge...
the bar was still running then, but has since been converted into a house.

Maybe France is more humane than Australia. Our people have a different view to our politicians. Maybe that will change now that Tony has been ousted. I hop so.
The refugees to Australia are not much more than prisoners and we the people are not happy with that.

The attitude here in the US is much the same as that of Australia's as depicted by Leon. A shame.
However, many citizens are very wary. The concern about ISIS runs deep.
Wonderful photos, Susan.

Thanks for the update. Hope that the move and transition goes well and that the welcome is sustained.