If like me you've had a good Northern Hemisphere apple year you now have a billion trillion apples in boxes and on trays in your pantry. You'll be looking for apple recipes and in France what could be better than the classic Tarte Tatin?


One of my tarts as it emerged from the oven. 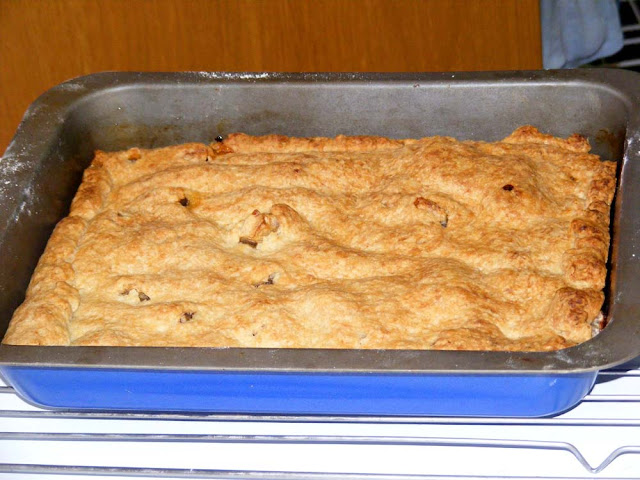 I chose to follow Clotilde Dusoulier's simple instructions but doubled the quantity to make two rectangular tarts rather than the usual round version. This used about 15 of my variably sized apples (1.6 kg) so made a worthwhile dent in one tray in the pantry.

There seems to be no question that the Tatin sisters created the recipe in the 1880s and it became the signature dish of their hotel in Lamotte-Beuvron in the Sologne (the area between Blois and Orléans). They called the dessert Tarte Solognote. It seems to have been the famous Parisien restaurant Maxim's who dubbed it Tarte Tatin in the 1930s.


One of my tarts flipped for cutting and serving. 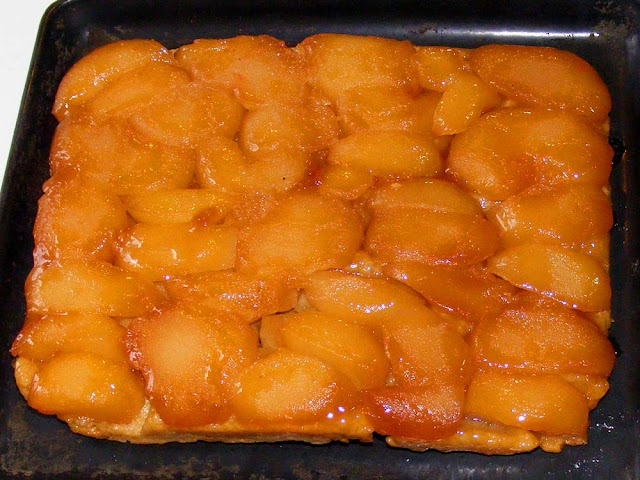 The original version seems to have been made in a cast iron Dutch oven, in the same way as one makes damper, by putting the pot in the coals and covering the deep sided lid with coals too. The sisters used the still popular old Tourangelle apple variety Reine des Reinettes (I used a mixture of this variety and Melville), and the apples were not peeled (I peeled mine, Clotilde compromises by partially peeling hers). The tart is traditionally served warm, unaccompanied by custard, cream or icecream. The original recipe contains no spices or anything other than apples, flour, butter and sugar (and very sensibly, nor does Clotilde's recipe that I followed).

Traditionally the tart is an upside down shortcake, which is made by putting a layer of apple chunks on the base of a dish with plenty of butter and sugar to form caramel. Then a simple pastry is laid over the top, the ensemble baked then turned out so that the caramelly apple layer is uppermost for serving. To be honest, if you are nervous about turning the hot tart, there is no real need to do so. Just cut and flip each portion as you place it in the serving bowls, or leave with the pastry on top. It will taste the same either way.

Tour De France news: The 2016 stages have been announced. The closest the Tour gets to us next year is on July 5, when it travels from Saumur to Limoges. As usual, the route won't be announced until some time in January, but I am guessing we will be about an hour's drive away. One for the diary...
Posted by Susan at 09:00


Flipping always makes me nervous. Can't imagine doing it with a Dutch oven, especially one which
has been sitting in hot coals. But as you say, it's only about presentation.
We get a variety of apples in our supermarket, all pretty much tasteless. When we lived in Vermont,
people discussed the attributes of the varieties in much the way the French might do grapes.

That was me (Sheila). Don't know why my name didn't show up.

I've no idea how they flipped a cast iron pan either. People discuss the merits of apple varieties here as well as grapes. Lots of people will tell you that Reine des Reinettes is the best cooker, but I'm not convinced.