The Alpini are elite mountain troops in the Italian Army. They are the oldest active specialist mountain warfare troops in the world and were established in 1872 to defend the Italian borders with France and Austria. The men are recruited from the mountain regions of Italy.


A pair of Alpini guarding the entrance to the cathedral in Milan. 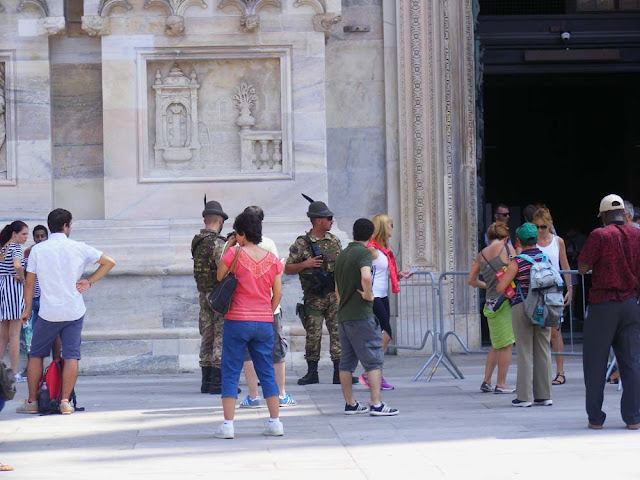 They are easy to identify because of their distinctive cap decorated with a raven feather. We saw them all over Milan at places which might be at risk from terror attacks, such as the cathedral and railway stations. Often they were not carrying guns but they wear bullet proof vests and carry radios.

Their most valorous combat was during World War I, when they defended a 600 km stretch of the highest alpine territory. Twelve metre deep snow was not uncommon and many men were killed by avalanches. Their bodies are sometimes found even today. These tough mountain men and their mules created walkways, cable cars, mountain railways and roads which are still maintained for the use of modern climbers.
Posted by Susan at 09:00

Hope it all goes well Simon...

It is interesting to note that those mountain troops whether Italian or French were created about the same time, the French being ahead of the Italian by almost two years : 15 October 1872 for the Italian and 30 January 1871 for the French.

According to Wikipedia the French Chasseurs alpins were created in response to the Italians creating the Alpini. With Italy unified the year before the French feared Italian encroachment.

This is confusing. Wikipedia is not to be trusted for a precise answer.
Depending on where you look you get different answers.
This one says 1871:
https://fr.wikipedia.org/wiki/27e_bataillon_de_chasseurs_alpins
This one says 1888, but goes back as far as 1838 for the chasseurs à pied, ancestors of chasseurs alpins :
https://fr.wikipedia.org/wiki/Chasseurs_alpins