The Duomo (cathedral) sits on one side of the Piazza Duomo, a space created at the expense of demolishing several significant 15th century houses in the 19th century, but thereby gaining a central hub for Milan. On the side of the piazza to the left of the Duomo is the Galleria and to the right is the Palazzo Real (royal palace). Plans for the fourth side of the square were never implemented. 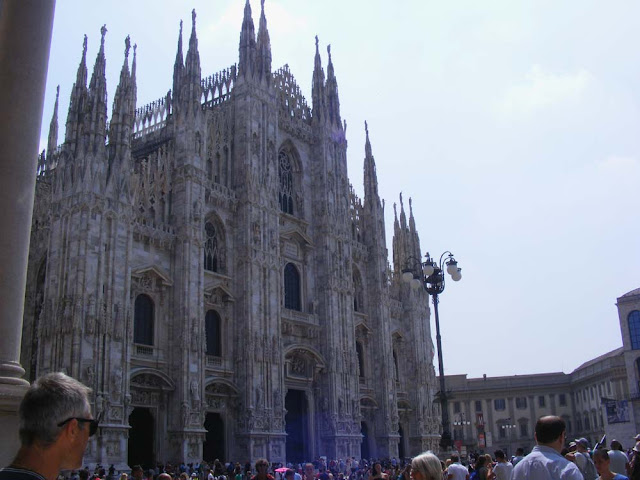 The Duomo di Milano is the fifth largest church in the world and the second largest in Italy (after Saint Peter's in the Vatican City, which at more than double the volume, dwarfs the Milanese effort). The current building was begun in 1386 and construction finally ceased in 1965. The core of the building is brick, in common with much of Milan. The cathedral's Gothic elements and marble cladding are the work of the French engineer hired to oversee the initial work and make it an unusual church in Italy, where the Gothic style of Northern Europe does not feature much. The marble comes from a quarry gifted to the cathedral in perpetuity by Gian Galeazzo Visconti.


The side, with the Madonnina statue just visible on the far right. 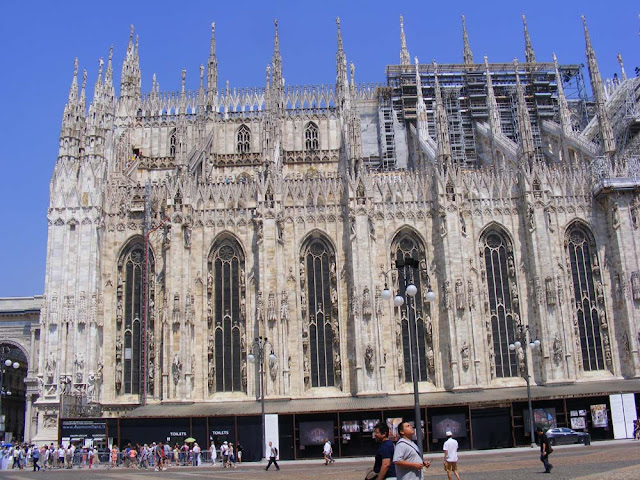 Over the centuries there has been a complicated programme of additions and alterations to the cathedral. Perhaps its most famous external feature is the gilded statue of the Madonna on the spire over the apse, known as the Madonnina. The spire she sits on is over a hundred metres high and she is so high up that she is frequently obscured by fog. Another spire supports a statue of Napoleon Bonaparte, who was crowned King of Italy here. Most of the spires were added in the 19th century as part of a push to finish the building.


A detail of the facade. 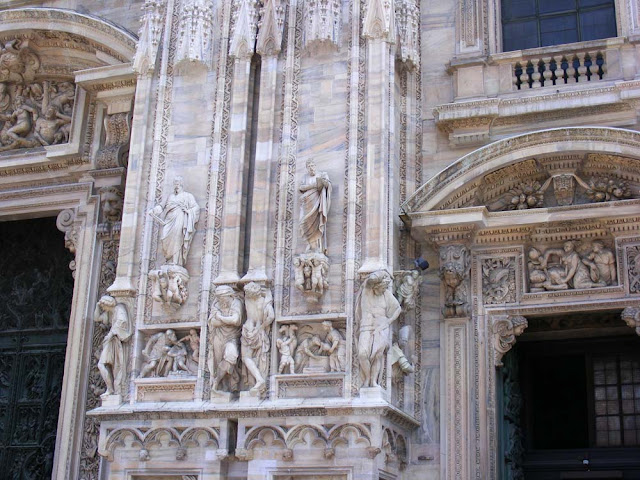 The cathedral exterior was cleaned a few years ago and nowadays people are encouraged to support the work by adopting a gargoyle. For a fee you can get up on the roof, which is apparently spectacular, but it was so hot and the queue so long when we visited that we didn't even contemplate it. We didn't go inside for the same reason.

The cathedral is not universally admired on aesthetic grounds. Inevitably given the centuries it took to build it is a stylistic mish-mash and the quality of workmanship varies greatly.

****************************************************
A la cuisine hier: A few weeks ago I set a rye sourdough starter to festering. Then a couple of weeks ago I used some of it to make crumpet batter. Unfortunately I didn't have enough wheat flour and subbed partially with buckwheat. The first crumpets were a disappointment, being stodgy and not forming the requisite pores. Now the batter has been in the fridge for over a week and I've learned to use just a third of a cup of batter per crumpet they are working much better.

I spotted a young Agile Frog in the potager and a Buzzard flew away as I arrived. The Ivy is just started to flower, but no sign of Ivy Bees yet. Only Honey Bees were visiting.
Posted by Susan at 09:00

" in nature conservation if you are not concentrating on habitat creation and regeneration you are just fiddling at the edges of the problem".....
I heartily agree... but with riders...
yes, pandas should be extinct by now...
given what they eat and their bodily functions, it would do a little to ease global warming... ;-)
but...
the work started in the Norfolk Broads to create new habitat for the faddy diet UK Swallowtail...
has resulted in the creation of a much more diverse habitat...
without that initial impetus, the Broads would now be over-run with boats...
and have no quiet areas, 'cept the original two reserves!
No Bitterns, no Cranes, no Bearded Tits...
no expanses of Water Soldier...

The initial high cost was long debated at County level before additional money came forth...
now "nature" tourism is almost one-third of the total!

But, back to pandas, the WWF has made exceptional use of a very cuddly...
if very smelly teddy bear....
to promote wildlife conservation and habitat recreation worldwide...
can't be a bad thing really...
and, when it comes to actual wildlife rescue and rehab...
Man as a species is ultimately responsible for the planet we inhabit...
a lot of wildlife rescue is done by volunteers...
often paid for by a bit of "blood money" squeezed from conglomerates...
but mainly donations from Joe "I do care" Public.
Should we dictate which species are rescued from dire situations...
let's face it, if it was a horse, cow, donkey, dog or cat...
nobody would hesitate to spend in developed countries!

It is worth thinking on...
and, if possible acting on...
feelgood factor or not...
but, despite Our responsibility towards the planet...
should we try and play as Gods!?!

If Man has caused it we should fix it otherwise leave it to get on with it as it has for millions of years.

A recent study has shown that work to save pandas has all sorts of benefits for the wider ecology and species in the area. It's shown again and again that focusing on a star species is the best approach when it comes to habitat management. The trickle down effects are almost always positive.

The article I linked to is about how much saving individual animals (not species) costs and how rarely the outcome is positive. They are making the point that mostly the money would be more effectively spent on habitat management, not spending squillions on an injured animal which will not survive in the wild anyway.

That's fine if you have a clear definition of 'it'. Nowhere is unaffected by man (pollution of one sort or enough is now everywhere for example), and re-wilding just tends to benefit generalist and already widespread species at the expense of specialist and rare species. Ironically I don't think we know enough to just let nature take its course. I think we have got to the stage where there is so little available habitat for stable ecosystems that we must quite actively manage it. Of course a small sector of the conservation industry disagrees and wants to radically re-wild, and my view may simply be my version of feeling like I'm doing something, just like the people 'saving' birds caught in oil slicks feel like they are doing something.

Fermented starters are interesting to work with, but I find the daily feeding business a bit tedious.

Chuck it in the fridge or freezer periodically to cool its ardour. The only disadvantages are that you can't leave it there indefinitely (a few weeks only) and you have to be even more organised when you want to use it because you need to 'resurrect' it a few days beforehand.

Suggested reading...
Man and the Land by Sir Laurence Dudley Stamp [New Naturalists Series No 31]....
one quickly realises that...
apart from small pockets of true wilderness...
Man has shaped it all....
for, given recent discoveries, possibly the last 30,000 years.

The big problem tho', is NOW...
the pace of Man's reshaping of the planet has quickened to a pace where other species cannot cope...
as an example, the Hen and Montagu's Harriers, as well as the Corncrake have suffered....
because the agriculturalists changed from Spring sown wheat and barley...
to Winter sown...
placing the new date of harvest slap in the middle of their breeding season...
so nests, usually with fledglings, are being combined to extinction!
T

Quite. Much of what man has altered was done so long ago that the rest of nature has adapted to it. That's why I'm not a re-wilder. I'm a mosaicist -- create a mosaic of different sorts of habitat, with corridors, that will accommodate everything, including domesticated animals.