Born in June 1550 Charles IX was the second of Henri II and Catherine de' Medici's sons to become King of France. He inherited the throne on the death of his older brother François in December 1560. Because he was just 10 years old his mother was appointed regent.

Always sickly and spindly looking he developed a ferocious determination to engage in the daily hunting trips that kept the courtiers fit and occupied. Each foray was followed by an extended period of recovery from the exertion. Possibly as a result of his frustration at not being the elite athlete he so desperately aspired to he frequently lost control of his temper, lashing out physically and verbally at anyone in his presence in a way that frightened everyone.


Charles IX at about 22 years old.
This portrait is based on one by Francois Clouet
and hangs in the Chateau of Azay-le-Rideau. 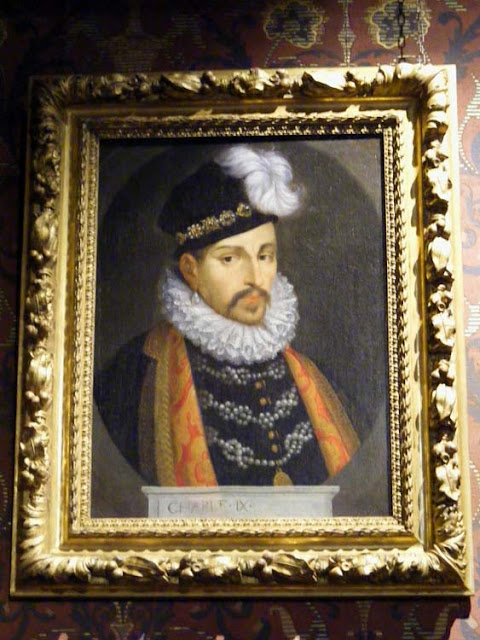 Adding particularly to his daily tensions was the escalation of the unrest between Catholics and Protestants, leading finally to armed conflict in 1562. He found himself in a very difficult personal position. Although Catholic himself, his beloved mistress Marie Touchet was Protestant, as was his most trusted advisor by 1570, Admiral Gaspard de Coligny. Finally, in 1572, he arranged the marriage of his younger sister Marguerite to the leader of the Protestants, Henri de Navarre.

This was supposed to work to unite the two sides and defuse the situation. Unfortunately, with high numbers of Protestants arriving in Paris for the wedding, some Catholics couldn't resist the opportunity for taking revenge for particular Protestant actions in the past. The young King handled it very badly, completely losing control over himself and screaming 'Kill them! Kill them all!' The Catholic faction needed no further encouragement and hacked thousands of Protestants to death in a killing spree known as the Saint Bartholomew's Day Massacre.

Over the next two years the King's health deteriorated to such a point that he looked ten years older than his actual age. He was frail and mostly confined to his private apartments. His mental health suffered equally, until it was feared that he was mad. He died a month before his 24th birthday, probably of tuberculosis. His only legitimate child was a girl and so his younger brother Henri inherited the throne.

To see further portraits of Charles IX, and particularly to see the change in his appearance over the years, go Les Derniers Valois.