This little figurine is in the Musée de l'Hospice Saint-Roch at Issoudun and dates from the 1st century before Christ. The small bust probably comes from a tomb on the Colline des Tours at Levroux and is one of the rare examples of a human figure in bronze from the end of the Iron Age. The figure wears a torc with buffer style terminals around his neck and holds a second twisted wire style torc displayed against his chest. This characteristic set of Celtic ornaments, even without any other sign, tells us that this is a druid, hero or venerated ancestor rather than a god. Other similar representations but in stone have been found in central Gaul. For instance, a figurine of a man in a similar pose, with arms across his body and holding something in his hand was found at Paulmy. 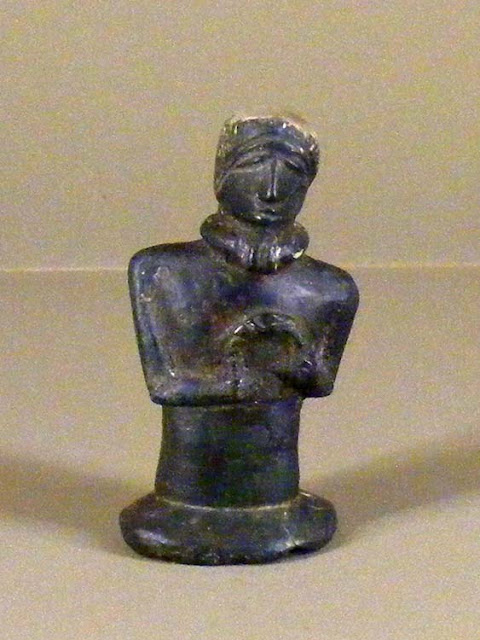 However in the treatment of the details of the face the strongest similarities are with bronzes from the east of Europe. The eyes represented by an oblique line, the long straight triangular nose, the thin horizontal mouth, the hair combed to the back in parallel rows and held by a band are characteristics similar to a little head carved on a pin for some armour discovered in Bohemia.
Susan
*********************************************
Robert Percy Brand 1893 - 1964. Enlisted as a private in the Essex Regiment on 30/10/1915, Service number 21735.
We know very little about my grandfather's history except for some dates. We will be marking those dates when the centenary of them occurs.
Simon
Posted by Susan at 09:00