Do Not Enter the Water 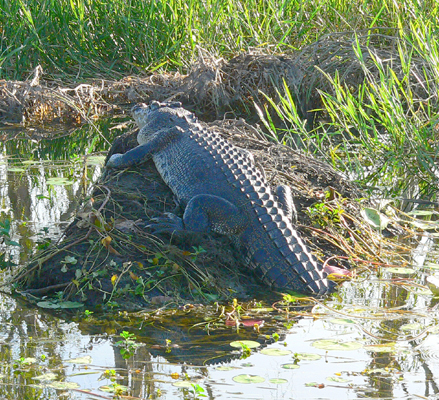 This Saltwater Crocodile, not yet fully grown male I believe, is the one and only crocodile I have ever seen in the wild. It had hauled itself out to catch some early morning rays in Paperbark Swamp, part of the World Heritage Listed Kakadu National Park in the Northern Territory of Australia.

There are signs warning visitors about crocodiles in many places in the Park. They say:

! Crocodile Safety
DANGER
Crocodiles inhabit this area.
Attacks cause injury or death.
This one was photographed from a small open metal boat with an outboard motor, known as a 'tinnie' in Australia. I assume what we were doing was fine, because we had a park ranger with us. It didn't move a muscle as we passed.

Apparently the number of fatal attacks on humans by crocodiles last year was a record in the Northern Territory, with four deaths, two of them in Kakadu and one just outside the park.
Posted by Susan at 09:00

Going by one of those in something called a "tinnie," I'd be the one not
moving a muscle.

LOL. We weren't as close as the photo makes it look.