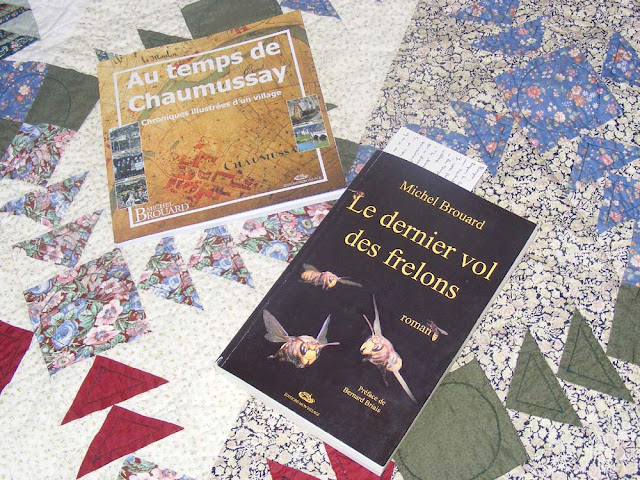 A few weeks ago we had an email from Michel Brouard. He is a blog reader who delurked when we posted photographs of the wonderful sculptures on his family home in Chaumussay. He told us in a comment that they were the work of his brother Alain, who is a sculpture living in Brittany. Some time later we were at the brocante (trash and treasure) in Preuilly and he came up to us and identified himself. 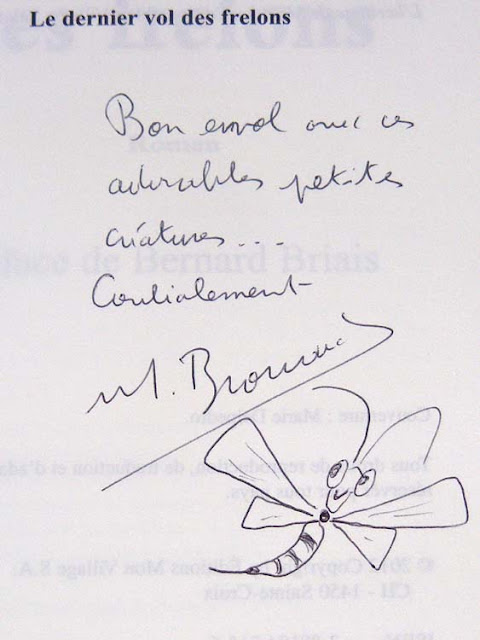 In his email he asked for our postal address and said he had just published a book on the history of Chaumussay that he thought we would be interested in. I responded as requested and very soon after a parcel turned up in our letter box. It contained not one but two books, both by Michel. There was a nice note with them and an explanation.


The inscription reads: 'For Susan and Simon, a walk through the history and stories of this pretty village in the Claise valley, regards, M. Brouard 9/15.' 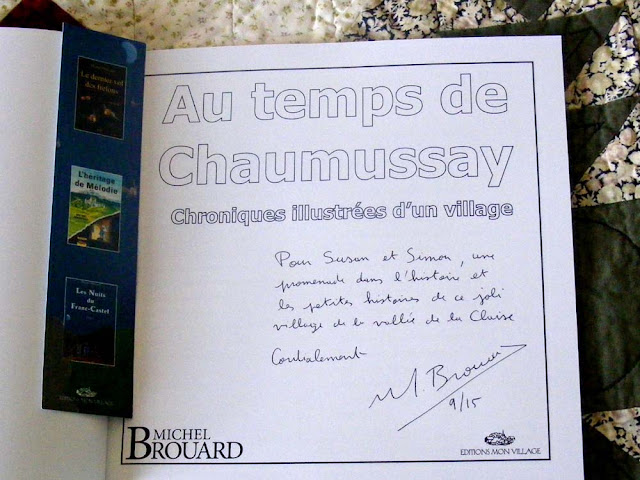 He lives in Switzerland where he works as a scriptwriter and director at a regional television station, but he also writes novels, and most recently, a history of Chaumussay. He grew up in Chaumussay and his latest novel, Le Dernier vol des frelons ('The Hornets' Last Flight') is set in a barely fictionalised Chaumussay.

Au Temps de Chaumussay: Chroniques illustrées d'un village ('The Life and Times of Chaumussay: An illustrated chronicle of a village') tells the story of a bucolic village far from any of the main thoroughfares, seemingly timeless, set on the charming River Claise, in picture postcard countryside. This little village has a rich and curious history and Michel has researched documents, photos and personal testimonies to tell its story. We've discovered several things we'd never heard of before thanks to the book and I am sure we will use it as a resource for any number of blog posts about Chaumussay.

The novel Le dernier vol des frelons sets Chaumussay (as Saint-Valentin) in the centre of an archaeological detective story involving the discovery of a skeleton with its hands cut off. The heroine is a young archaeologist who grew up in the local chateau. After being asked by the mayor to look at the skeleton and advise him she becomes involved in a complex plot which features a peculiar professor and a Swiss sect. Events escalate and despite her courage and humour she is caught up in a frightening situation. I'm about half way through and definitely want to find out what happens in the end! It's fun trying to identify real places and people as they appear in the book, and I'm enjoying the fact that there is a supporting caste of well observed insects.

Michel says that the books are available at the newsagents in Preuilly and Le Grand Pressigny, or directly from him. The history of Chaumussay is €20 and the novel €15. If you would like his contact details just email me and I will send them to you.
Posted by Susan at 09:00

I like those very local histories...inevitably they are written by people who are passionate about their area ans are a mine of information.

Could not find anything like them for our area here, but then the local online news service started publishing people's reminiscences and that has started an avalanche of responses - completely fascinating for me as we even discovered that - as we suspected - there had once been a house on the site where our new one is being built and that it comes with stories attached.

These local histories are great for history of the 19th and 20th century, more dubious for anything further back. Getting any information about our place has mostly been a matter of talking to locals who remember the Poupineau/Bardon/Toussaint family. The archival record ceases at the Revolution, but the barn is clearly much older. So far any information about it is guesswork and speculation.

As far as the town is concerned history began in the late nineteenth century.....