Catching the train to Amboise

Another of the ceramic panels at Tours Station, this one highlighting Amboise. As you can see, this was one of the first panels to be removed for conservation.

Unlike our other posts on the subject (like this one), there is no need to print a timetable for the trip Tours to Amboise. You catch one of many trains a day that got to either Orleans or Paris Austerlitz and get off at Amboise (usually the first stop after Saint Pierre des Corps). 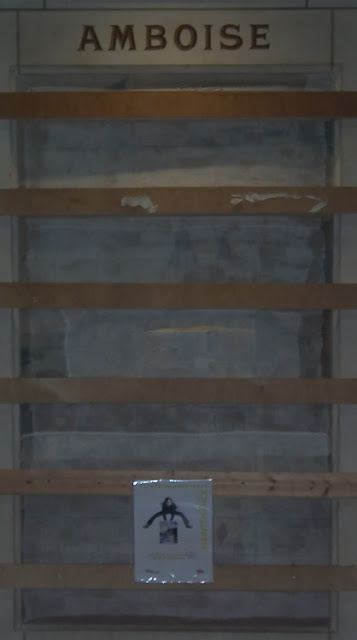 Susan
**********************************************
Au jardin hier: I've brought the last of the grapes in. They were falling off the vine in significant numbers, so now is the time to finish them with a batch of grape jelly. The last of the walnuts have also fallen and been gathered. This year's crop was the best we've had. The Aged One says his crop next door has been very poor, affected by the dry summer and there is a lot of insect damage. It remains to be seen how many useable nuts I get as they need to dry for a week or so before I get cracking.

I defrosted some tasty chicken casserole cooking liquor and added chunks of Label Rouge Aveyron Veal to it. Cooked in the oven for about an hour it turned out very well.
Posted by Simon at 09:00