The chapel, created in the 19th century out of a former bothy. 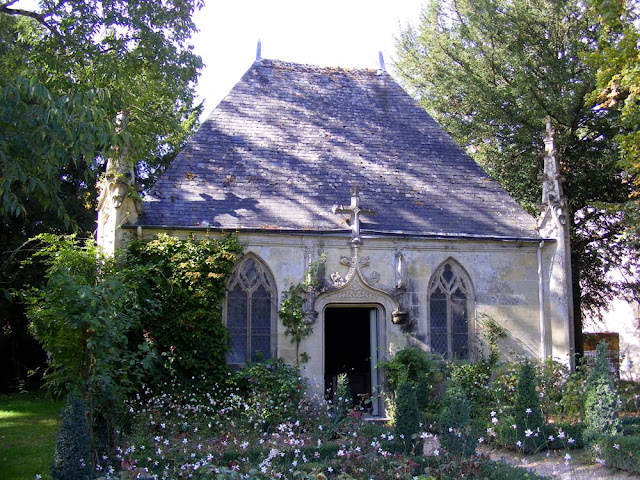 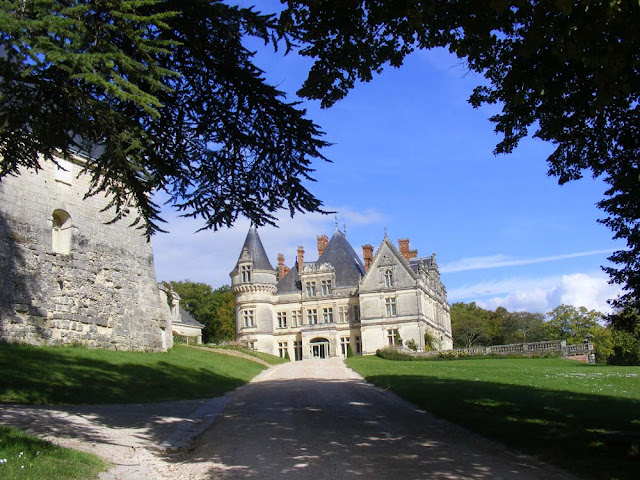 The outbuildings, moats, former chapel and park with its 16th century gate were all listed as historic monuments in 1947.

A detail of chimneys and gable on the chateau. 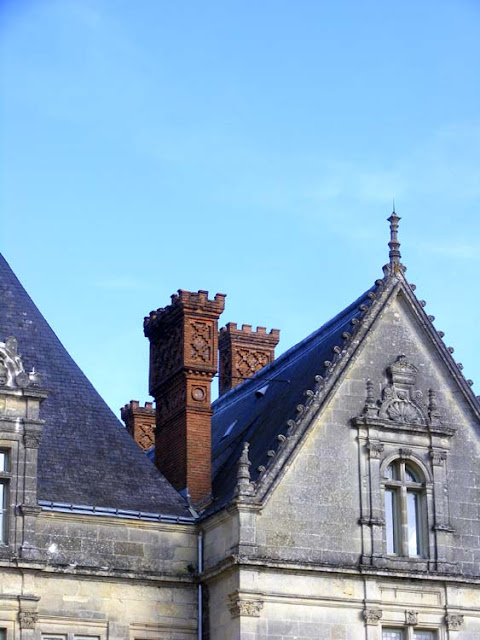 Before the construction of the chateau there was a 14th century fortress on the site. In the 15th century the owner was Nicolas Gaudin, the queen's treasurer.

The park is a magnificent example of the 19th century landscape style, with many mature cedars, sequoias and oaks. 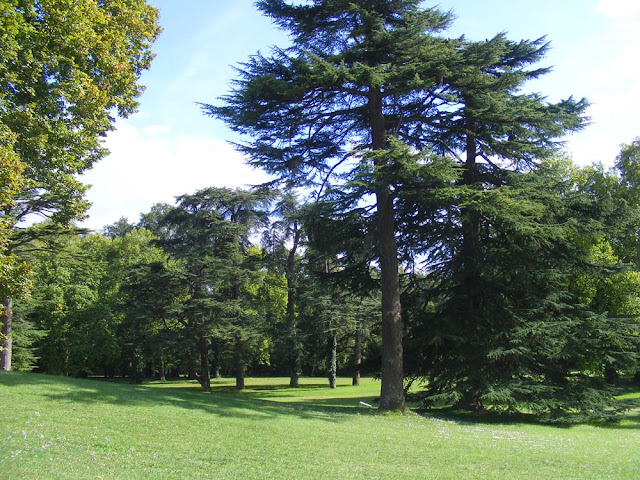 In 1510 Philibert Babou became the owner when he married Nicolas' descendant, Marie Gaudin (notable as being the mistress of François I of France, Pope Leo X and Charles V the Holy Roman Emperor). She was the most beautiful woman of her day and according to a book written in 1834 her likeness may be seen in the statue of the Virgin in the Collegiate Chapel of Notre Dame de Bon Désir, for which she was the model. The book was co-written by Louis Gabriel Michaud, but I cannot work out where the chapel is/was, apart from 'between Tours and Amboise', as regurgitated by all the internet sites which mention her. Any information which would allow me to track down this statue would be appreciated. I don't know if there is a connection between the chapel and the Chateau of Bondésir. Michaud is the name of a Montlouis family, a member of which owned La Bourdaisière in the 20th century. 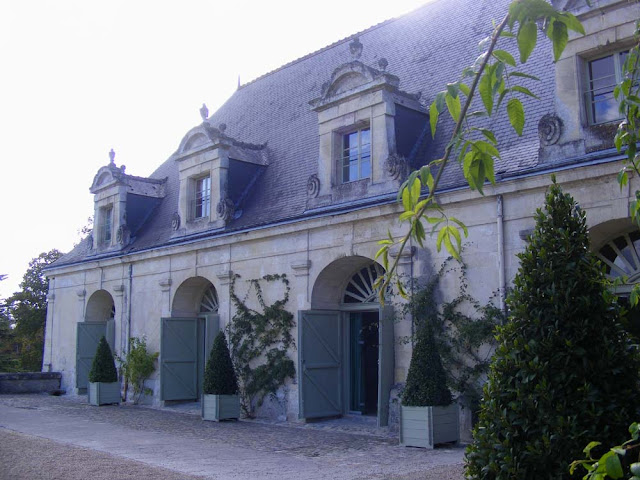 In 1520 Philibert Babou decided to replace the fortress with a grand new chateau, keeping only one of the old medieval towers. The local legend is that his famous great-granddaughter Gabrielle d'Estrées, mistress of Henri IV, was born here, but it seems that there is considerable doubt about this amongst serious historians. However, it was the home of her aunt, who brought her up, and the Babou family retained the chateau for several generations. But in the 17th century it went through the hands of several different owners. Finally it was purchased by the Duke of Choiseul, who demolished it, the story goes, to annoy the Duke of Aiguillon, his rival and enemy at Véretz. La Bourdaisiere and the chateau at Véretz more or less face one another over the river Cher and the Duke of Choiseul wanted to deprive the Duke of Aiguillon of his lovely view. Plus, and probably more to the point, he wanted the stone for his new flight of fancy at his chateau of Chanteloup.

The estate was seized as state property during the Revolution, and during the Terror the new owner began to reconstruct the building. This work was finished by his son in the 19th century, who chose to build in the neo-renaissance style.

In 1923 it was sold to a wealthy American woman, then in 1938 it was bought by an Englishman. The Nazis occupied it during the Second World War. After the war it became a military school. By 1959 the place had been more or less abandoned and it was purchased by the local authority and turned into a retirement home. In 1988 it failed to meet modern health and safety requirements and was sold to a local notaire, François Michaud. He subsequently sold the estate in 1991 to the current owner, the Prince de Broglie.

Update: A reader who grew up in the Touraine Loire Valley but now lives in the US has sent the answer to my question about the statue of the Virgin that Marie Gaudin served as the model for. This is what he said:

Your blog on La Bourdaisière was really interesting. Your question about Marie Gaudin sent me on a treasure hunt. This is what I found:
Summary:  there is a tradition that the face of the Virgin Marie in the "Mise au tombeau" in Saint-Denis in Amboise is the face of Marie Gaudin; the other characters may represent members of her family.
The sculpture was removed from the chapelle de Bondésir in the 19th C.


Many thanks JLM, for this and the wealth of other information you sent with it (which will no doubt appear in forthcoming blog posts).
Posted by Susan at 09:00

Email ThisBlogThis!Share to TwitterShare to FacebookShare to Pinterest
Labels: Churches, Gardens and Parks, Pictures of Chateaux

I Googled Prince de Broglie and came across an interesting article from the Wall Street Journal.
He sounds like a very interesting fellow. Would love to visit the gardens. The annual Tomato
Festival must be quite an attraction.

I've seen the WSJ article. I think he is an interesting chap. The friend I went with on this occasion says the Tomato Festival is bedlam and they run out of tomatoes. You are better off going either just before or just after, like we did.

What is a bothy?

I knew you'd ask :-) Basically it's a garden shed. It's a word used in British English to mean a hut used by gardeners on a private estate.

Also, in the Highlands of Scotland and other wild places, a basic traveller's shelter - unstaffed, unlocked, you bring your own supplies, make your own fire and dispose of your own waste.

Yes, and this is I presume the original meaning. The English adopted a Scots word for this sort of hut to mean the gardener's hut. I guess bothy in the English sense is the equivalent of a cabane des vignes, except for the setting (but they fulfill the same function).