Giuseppe Garibaldi is a key figure in the unification of Italy. He was widely admired in France, Britain and the United States as a courageous military leader and principled politician dedicated to the fledgling modern Italy.

He was born in Nice in 1807. The town was French at the time of his birth, but had been annexed from Italy only a couple of years before, then later given to Victor Emmanuel II of Sardinia in 1814 as part of the peace negotiations at the end of the Napoleonic Wars.

The Garibaldi family were involved in coastal trading and Giuseppe became a merchant marine captain. He also became involved in the burgeoning political and social movement to unify Italy. After a failed insurrection resulted in him being condemned to death he fled to South America. Here he met his redoubtable wife Anita and took part in the Uruguayan Civil War. Later his followers would be famous for the red flannel shirts they wore in lieu of a uniform, and it is probably in Uruguay that he first got his men to wear them.


The bronze equestrian statue of Garibaldi in Milan. 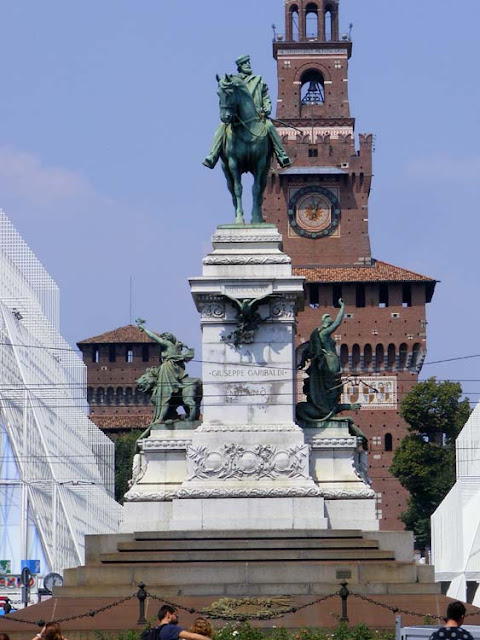 In 1848 revolution broke out in Italy again and Garibaldi returned with a legion of men. He offered his services to the provisional government of Milan, who had rebelled against the Austrians. After winning several victories in Lombardy he went to defend Rome against the French. Ultimately the siege of Rome resulted in surrender and Garibaldi fled north hoping to reach Venice with 4000 men. In the end, only 250 remained at his side and his pregnant wife died on this march. Once again he was forced to flee to the Americas.

He returned to Italy in 1854 and bought the island of Caprera, where he became a farmer. In 1859 the Second War of Independence broke out and Garibaldi was appointed a Major General and raised an army of mountain volunteers who would be the template for the famous Alpini some years later. Then he took Sicily and Naples, handed them over to Victor Emmanuel and went back to being a farmer on Caprera. After a couple of years progress on unification was not going to Garibaldi's satisfaction, so he decided to step in again. Pro-monarchy but anti-Catholic, he decided to take Rome. This was not officially sanctioned, he was wounded and when the action failed he was imprisoned for a while.

The next time he took up arms it was with the full support of his government in 1866 and he took his Alpine troops to war against Austria. After dealing with the Austrians he once again attempted to take Rome and once again was wounded and imprisoned. In 1870 the Franco-Prussian War broke out and somewhat to his compatriots surprise he was strong in his support of the French.

In the last years of his life he was a member of parliament, but spent most of his time on Caprera. He still actively supported reforms such as universal suffrage, abolition of the papacy and church property and the establishment of a standing army. He died in 1882, an international legend.

Wild Liquorice isn't an active link!
Garibaldi sounds a right character....
when did he have the time to invent the squashed-fly biscuits that are named after him?

Link fixed now. And Garibaldi spent years at a time on Caprera when he wasn't being a revolutionary. I expect that's when he got into baking and invented the biscuits.

It was a "Tribute" biscuit....
I found this on Wiki....
"The Garibaldi biscuit was named after Giuseppe Garibaldi, an Italian general and leader of the struggle to unify Italy. Garibaldi made a popular visit to South Shields in England in 1854. The biscuit was first manufactured by the Bermondsey biscuit company Peek Freans in 1861 following the recruitment of Jonathan Carr, one of the great biscuit makers of Carlisle."

My comment about Garibaldi inventing it in his 'off' years was not serious. Thanks for looking it up though. I should have realised it was connected to his visit to England.

It wasn't serious on my part either...
but it is interesting that it IS connected to him!!
And I learnt that it wasn't an Italian biscuit at all...
had always thought it was!!
Must look up some recipes now!

You are right - it is interesting. My advice re homemade Garibaldis would be to try for something with more buttery pastry and more filling than the real thing. No idea how you get the curved shape though.