From July 13 roadside billboards are no longer allowed in rural France, whether they are on public or private property. Businesses had until that date to remove them, but they don't seem to be rushing to comply. I photographed all of these signs on the Loire levee bank between Amboise and Vouvray on 13 July. They obviously don't expect the late penalty of €203 per day per panel to be applied. 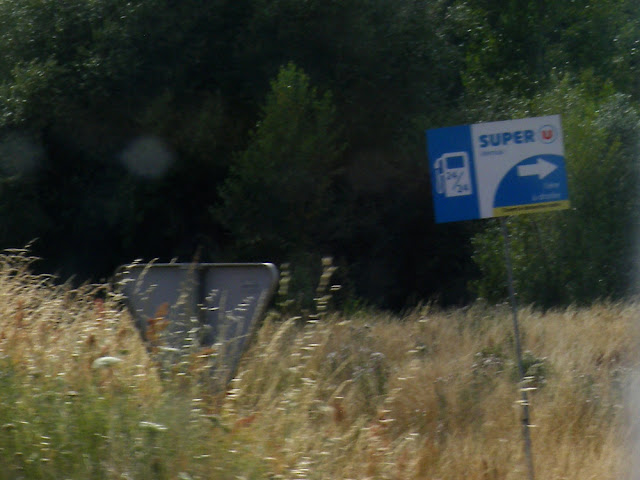 The law applies specifically to rural roads and small towns and villages. Not everyone is convinced that removing the billboards is a good thing. Some local tourism officials feel it puts out of the way communities at a disadvantage if they are not visible from the road. 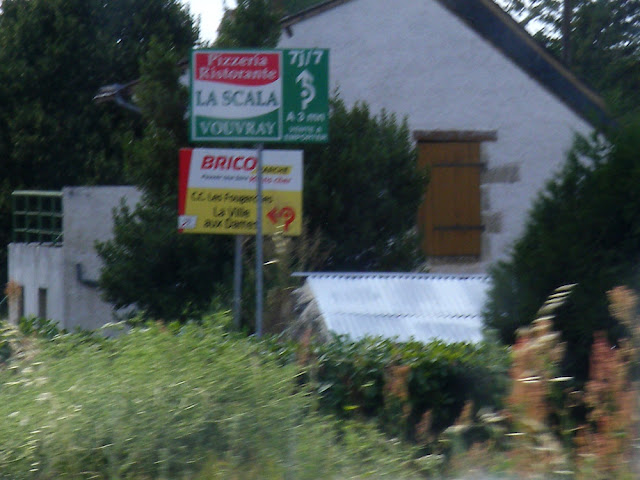 The law is the result of lobbying by various organisations concerned with the appearance of transport routes and streetscapes. Whilst they are happy to have had a victory they cynically acknowledge that the only reason they won was because these small rural billboards are not big business. The real fight, they know, will be big urban digital advertising hoardings. Locally, Chambray les Tours will be the place receiving the most on going scrutiny by these groups. Luckily, the local council seems to be sympathetic, already having introduced rules limiting the size of billboards. The local associations fighting for the removal or reduction of such advertising are perfectly aware that the prefecture will only act to enforce the law if they continue the pressure to improve the look of not just the countryside but commercial areas too. Apparently Langeais at any rate has taken it seriously and has had a blitz on these rural billboards, removing 60 illegal advertisments. 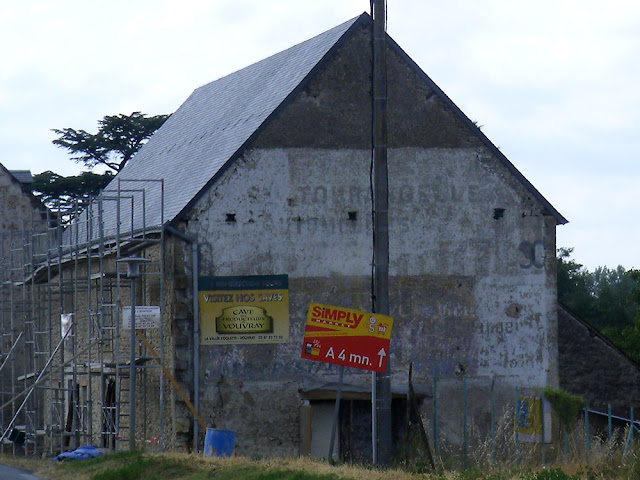 From July 13 the only signs allowed on roadsides in rural areas or within the boundaries of municipalities of under 10 000 population will be for local products, cultural activities (shows, exhibitions, educational activities) or historic sites open to the public. Previously supermarkets, garages, hotels, restaurants and service stations could get permission to erect a billboard because they were providing useful information to travellers. However, the feeling now is that they have abused the system. 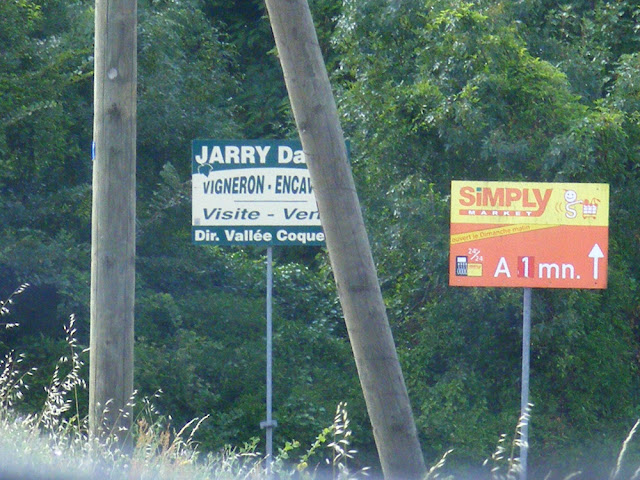 This is not the first time billboards have been banned in France, and the painted ghost signs on buildings date from a time when they were seen as a more acceptable form of roadside advertising. Ironically, the ghost signs now enjoy a certain amount of heritage protection, occasionally being listed as historic monuments in their own right or carefully restored.

Email ThisBlogThis!Share to TwitterShare to FacebookShare to Pinterest
Labels: Ghost Signs, The Car and Driving

"From July 13 roadside billboards are no longer allowed in rural France"...
good... when it comes to the proliferation of supermarché ones... with totally riddikulus ETAs....
unless you happen to have a charmed life, or someone elses licence in your pocket!
Bad when it comes to helping rural France's economy....
but....
From July 13....
did anyone say which year??

I quite like them and they have been around for years and years, to me they are part of France and I will miss them if it is ever enforced!! How the heck are you going to find a supermarket now if you are in some strange rural place. Not good is my view...

I agree about the ridiculous ETAs and there are way too many supermarket signs -- they are the principle reason this piece of legislation got through.

The problem is that the supermarkets put up 15 signs when 3 or 4 would do. These days there is increasingly an expectation that people are using GPS or some other interactive map that will pin point service stations and supermarkets. The other problem is that the signs get tatty, especially long established restaurants and hotels. There needs to be some control of the look of the signs and their number. A board on a stick doesn't cut it aesthetically, and lots of faded boards on wonky sticks, definitely not.

Really, this is a first-world problem that doesn't need a solution. These little and often faded signs do not mar the landscape -- au contraire. They are part of the charm of the place.

I have to admit I do not find them charming or even moderately attractive, but my observation about how the passing of time brings nostalgia and therefore heritage is connected to your point. I have no strong desire to eradicate them myself but I do think the supermarket ones should be at least halved in number and dispense with the ridiculous ETAs. There are at least 4 Simply signs on the levee between Amboise and Vouvray, a distance of 15 km. How blind do they think motorists are! Otherwise I am happy to see them if they are providing useful info for the traveller, as was the original premise. Whole groups of French people obviously feel differently though.

Once again, beauty is in the eye of the beholder. These commercial signs, faded or not, are an eyesore. I'm not sure they are part of the French landscape, not mine, anyway. One hundred years go in Paris, some buildings' blind walls were painted all over with commercial publicity. Fortunately, as far as I know, they're all gone; they marred the Parisian landscape.

On the other hand, non-commercial signs that are in the public interest, such as directions, general information or otherwise, are welcome.

My point of view is probably very American. Over there, the signs are not signs but billboards, and they are overwhelming and ugly. Here in France, the little signs are so discreet that you have to hunt for them. They don't really get in your face. I think the regulations that keep them small are good ones, but the signs do serve the public well. When you arrive in a town you don't know, it's nice to see signs directing you to Intermarché, SuperU, Simply, or to local restaurants. And those big signs that decorated the windowless walls of houses and outbuildings are now considered artsy and nostalgive. Dubonnet, Suze, and Peugeot seem to have had a lot of them painted in past decades, and now they are "ghosts" from the past.

Meant to type "nostalgic" of course.