Fungicides in the Vineyard

At the Chateau Gaudrelle estate in Vouvray AOC they have several parcels of vines. They never blend the parcels used for making still wines, but the sparkling wines are a blend of 7 different parcels.

The vineyards of Vouvray sit above the Loire river on its right (north) bank just east of Tours. The Loire sucks a trail of cool damp weather into the area and the closer to the river the vines are the better they do. A convection current rolls the air over the vines in the vicinity.


Guillaume, the vineyard master, and an assistant work amongst the vines. 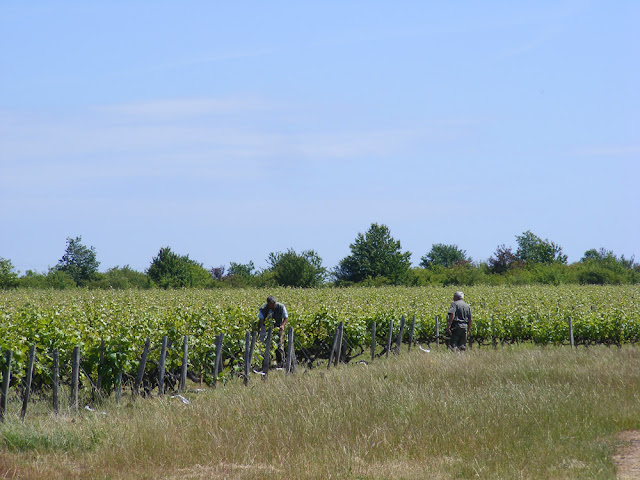 The soil they grow in is flinty clay and it produces an intensely fruity grape. The vines are carefully pruned for their role in producing high quality bunches of wine grapes. The winemaker, Alexandre Monmousseau, is not aiming for good looking vines, but ones that produce the best grapes. The chenin blanc grape variety grown here is quite robust and doesn't mind a bit of scorching. The vines are totally at the mercy of the weather -- no covering against hail or frost is allowed, no irrigation in times of drought. As a result, each vintage has a unique signature.

A session in the vineyard itself, as opposed to the winery and tasting room, is always educational, and a recent visit was no exception. Alexandre started talking about fungal diseases and how to combat them. I really pricked up my ears when he said they were no longer using copper sulphate (bordeaux mixture).

This 19th century concoction is widely used and available to both professionals and home gardeners. Its use is currently allowed in organic agriculture. However, it is highly toxic, especially to mammals (that's including us humans...), let alone fungi, and is the sort of product that makes a complete joke of organic practices. As Alexandre eloquently put it, in the 19th century the contents of two South American copper mines were dumped on the vineyards of France, and all that copper is still there! It lowers soil biodiversity and he says it means the soil is like a run down battery, struggling and overloaded. The sulphur component of most fungicides (modern and old) makes them problematic to apply too. They are toxic to insects, and in powder form, not good for the vine workers.

He switched several years ago to the much less well known phosphonate fungicides, developed in the 1970s. The active ingredient is potassium phosphite and the product has a low copper content, and (I think) no sulphur. The mixture is sprayed on to the vines in much the same way as copper sulphate but has the advantage of being longer lasting because it is to some extent absorbed by the plant. Copper sulphate simply sits on the surface and washes off into the soil (to kill more soil bacteria...) as soon as it rains and must be repeatedly applied. The potassium phosphite acts a bit like a systemic, lodging itself in certain parts of the plant. It doesn't completely eradicate fungal diseases like powdery mildew, its main target, but the soil bacteria will 'mop up' the remaining spores and residual fungus. Potassium phosphite breaks down into hydrogen, oxygen and potassium and is completely harmless in the soil (even mildly beneficial).


Lining up to mow down a row in the vineyard. 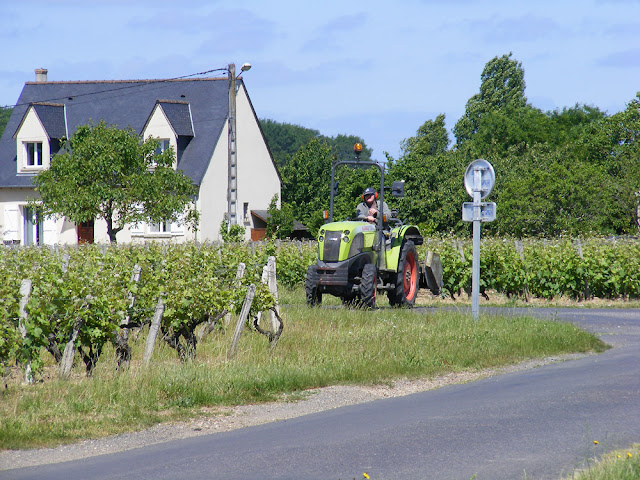 Despite its benefits, potassium phosphite must still be applied before an outbreak of fungus occurs in order to be effective. Good winemakers watch the weather carefully and apply when weather conditions suggest an outbreak of mildew is imminent (warm and wet). Lazy vineyard managers simply use the calendar and apply a fungicide every 2 weeks during the summer. (Another winemaker we visit, who uses modern synthetic  pesticides said during the wet summer of 2012 he sprayed 9 times. His organic neighbour sprayed 18 times, with copper sulphate...)

A mildew outbreak is not the only fungal disease that the local winemakers dread. Esca is also a killer, and much more difficult to control. The only certain treatment is arsenic based, which of course is banned. Esca is a combined systemic attack on the vines by three related fungi. The cost of replacing affected vines is significant. From grubbing up to waiting 5 years for a legally productive vine, each plant costs the winery €10. At Chateau Gaudrelle they have resorted to using an unproven and unusual technique to combat the disease. Here they play a specifically designed musical sequence to the vines several times a day, which the inventors of the system claim will modify the amino acid production in the fungi and disrupt its lifecycle.

The same people are working on a similar system to control powdery mildew. Alexandre has been trialling the system for esca for several years now and I think is increasingly convinced of its efficacy. I hope it does work, but we shall see...

A few weeks after this visit Charles, who works at Chateau Gaudrelle, bounced out when we arrived, to tell us they had spent the morning in the vineyard, winding tendrils into the wire trainers. Normally these are given a 'haircut' to reduce growth, make the vine concentrate on its fruit and prevent the vine creating too much shade. However they are trialling a new system for managing the tendrils, having read a study which suggests that the vines use their tendrils like antennae to measure the surrounding conditions and respond to them. Chop them off and the vine loses that ability, so in order to allow the vine to keep them, but prevent them whipping vine workers in the face like triffids, Charles and his colleagues had been sending them horizontal. The theory is that the tendrils will at some natural point stop growing. They will be watching with interest to see how this management technique works in practice.


Alexandre ferrets around in the vineyard soil to find pieces of flint and fossils to show visitors. (Note that this parcel is still in recovery from decades of pesticides and herbicides applied by the previous owners, so the soil is still rather bare under the vines.) 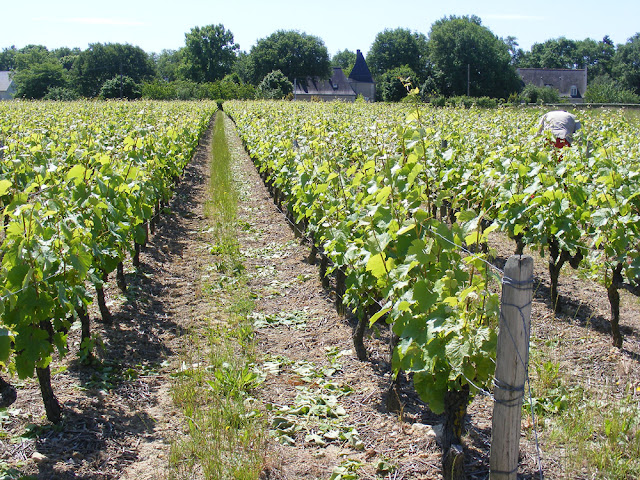 Another vineyard management technique they use is mowing between the rows. The grass is left under the vines to provide a bit of mulch. Many winemakers still use herbicides to create bare earth under the vines, but this is increasingly criticised, and certainly leads to problems like erosion on sloping sites. Those who advocate allowing grass and wildflowers under the vines point out that it creates a cool moist microclimate around the base of the vines and means they have to compete for nutrients. Vines which have to send their roots deep to survive generally produce the best grapes for wine.

Decidedly, Susan, the word fascinating is the one, again and again, I have to use for each of your posts. Being a city boy, I had no idea what making wine implied, even though I had vignerons ancestors in Arbois, Franche Comté.

Do some vineyards use roses at the ends of the rows as an early indicator of problems? You see it alot around Chinon. C

Lots of vineyards plant roses, and you will sometimes be told it's so they act as an early warning, but in fact I don't think this holds up in practice. I think the winemakers plant roses because they look pretty and the customers like to see them. It's a nod to a made up tradition I think. Certainly no winemaker we go to bothers with roses and none has mentioned them as a vineyard technique.

When was arsenic banned in the vineyards?

Sodium arsenite was banned in 2001 in French vineyards.

Wow. I thought the ban was more recent.

2001 is recent enough. INRA admit that the reason there is no alternative treatment yet is because sodium arsenite was so surefire that no one bothered to do any research into an alternative until the ban actually came about. Now they still have years before another product will come on the market. They don't even know how esca is transmitted yet, much less how to stop it. Shameful really.