A unique 18th century painting of Louis XIV is being restored at the Chateau of Chenonceau.


Adeline Errard begins her work on the frame by gently probing and scraping with a scalpel.
In front of the stone fireplace, under the lofty ceiling beams, two conservators work in almost complete silence. Only a murmuring from the assembled visitor crowd is audible.

Jessy Guérin strips away a layer of tissue that she had previously pasted to the front of the painting to stabilise it while she relined the back.
In one corner of the room the faded yellow of a canopied bed contrasts with the white light diffused by two large panels in the centre of the room. The room is on the second floor of the chateau and was once the bedroom of Philibert de l'Ormes. But there's no sleeping going on here. Instead two young women work meticulously. While one stands in front of a large painting wielding a cotton bud soaked in solvent the other is hunched over an imposing carved frame, scraping away.

The two conservators consult over some interesting feature of the frame. 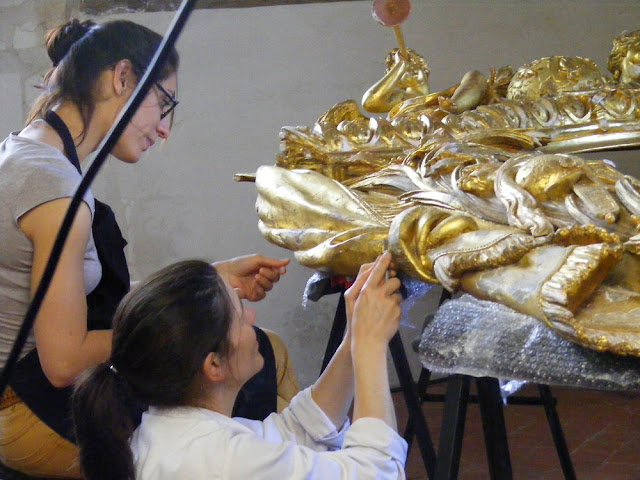 Jessy Guérin, paintings and polychrome objects conservator, and Adeline Errard, gilder and conservator, have been contracted by Chenonceau to restore the large portrait of Louis XIV that usually hangs in the Louis XIV drawing room. On 14 July, 365 years ago and before it was the Fete Nationale, Louis XIV visited Chenonceau. Later, in memory of his visit there, the King offered his uncle the Duke of Vendome (then owner of the chateau) this portrait by the official court painter, Hyacinthe Rigaud. The painting is paired with a gilded solid wood frame, carved by another court artist, Jean LePautre.


Jessy wears a mask and gloves while applying solvents to remove varnish and other grime. 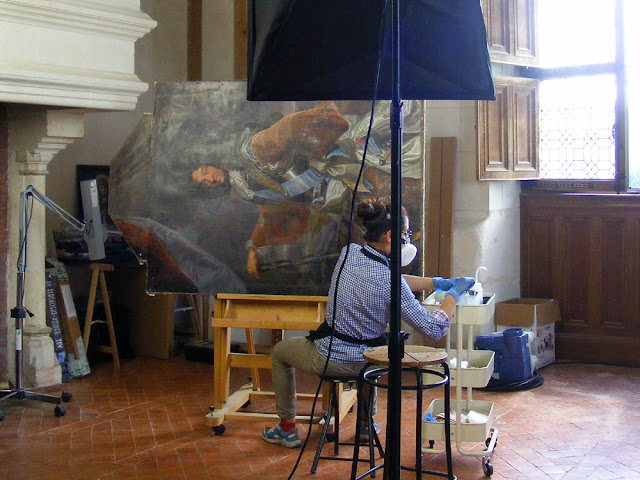 This year is the 300th anniversary of Louis XIV's death, so it is fitting that the painting is given a facelift to reveal its original beauty. After the painting was removed from its frame Jessy Guérin started by working on the back to consolidate the whole work, relining and cleaning. The next step was to clean the canvas, which has accumulated layers of varnish in certain places because of previous restorations. Despite its age it remains in near perfect condition. The aim is to restore the colours then lightly re-varnish for protection.

Detail of the bottom left corner of the massive frame. 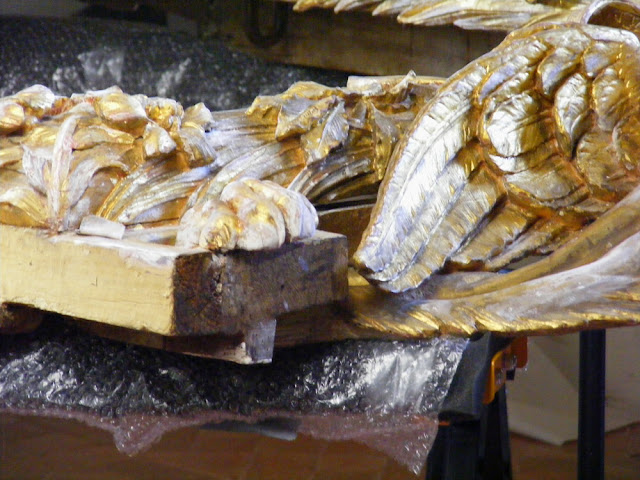 On the other side of the room Adeline Errard works on the hefty frame, which is supported on trestles. This monumental object is made of 4 pieces of wood and weighs 200 kg. Usually frames like this are modular, made of small carved or moulded pieces which are then mounted together with tacks and glue. The level of skill required to carve the frame out of solid wood is considerably more than the more usual method. The frame is finished in gold leaf.


No, she is not coating the frame with peanut butter... 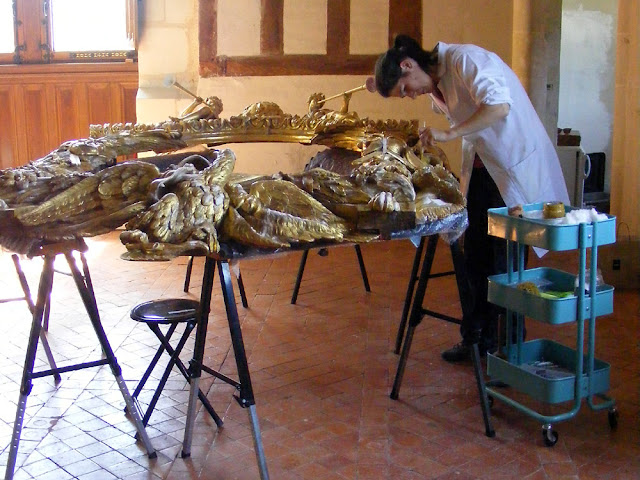 The conservation work began with treating the frame for insect pests by injecting insecticide into all the beetle exit holes. This will impregnate the work and kill any remaining larvae. Then Adeline moved on to repairing the damage wrought by the passage of time, and the places that visitors repeatedly touch. She has cleaned, replacing putty before she adds a coat of red clay known as bole prior to regilding. The technique she is using is called water gilding, because the materials are water soluble and the bole is to enrich the effect of the tissue thin gold leaf.

Jessy uses a cotton bud that she has made herself by twirling cotton wool around a bamboo skewer. The cleaning fluid in this case is distilled water, but spit is also widely used. 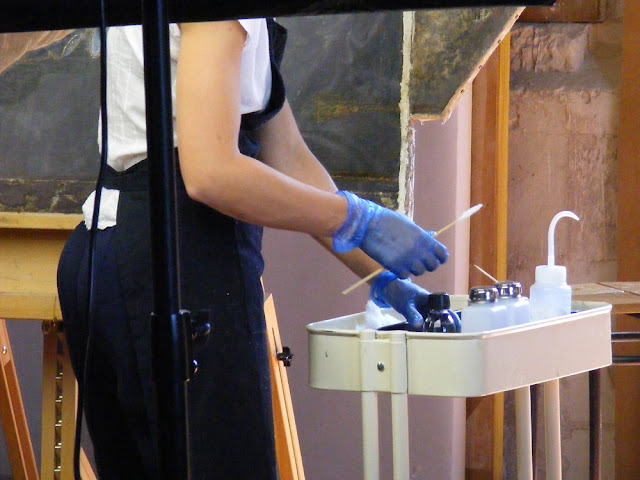 While working on the frame she discovered traces of carved fleur des lys which had been removed during the Revolution. A single one remains intact, hidden under some drapery.

The work will take two full months and is due to finish in mid-July. In the meantime, visitors to the chateau get to see the painting in a different way and learn about paintings conservation.

For my previous post on the portrait, where you will see the painting prior to conservation, click here.