My birthday party ten years ago was unusual, in that I don't know it was going to happen, I only knew one of the people there, and even once I was there I had no idea what was going on.

I had arrived in Korea the day before to spend a month teaching English to junior school kids at a summer school. I had never done anything like that before (which caused a huge attack of "what the hell do I think I am doing" a couple of days before I left) and really knew nothing about Korea except that I had enjoyed the 10 hours I was there in transit a couple of years earlier.

My Chinese friend Benson, who I had met whilst temping in London, had married a Korean girl and had moved to Seoul to live with her family. He emailed me and said "hey, if you're unemployed over summer, why not come and teach". I said yes before thinking it through, as is my wont, and 2 months later I was in the most polluted, crowded, hot and mystifying place I had ever been.

Anyhow - the day after I arrived in Korea, Benson rang me and said "it's your birthday, we're going out" and organised his wife and her best friend to accompany us. Over the evening I learnt about using both hands whenever you pass something to someone, how to sit on the floor to eat, wrapping your little pieces of BBQ meat in a little parcel of leaves, and allowing yourself to be fed: I mean literally - because it was my birthday the ladies took it in turn to wrap meat for me, and pop it in my mouth. 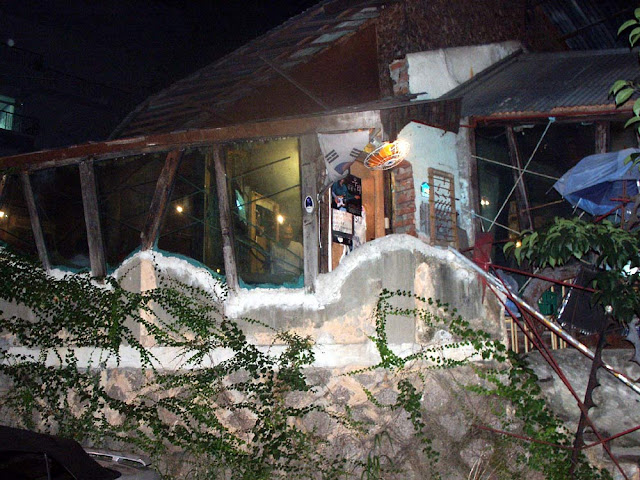 Afterwards we went to a soul club and ordered a big fruit platter and some beer - It is very non-q to drink without having food on the table. 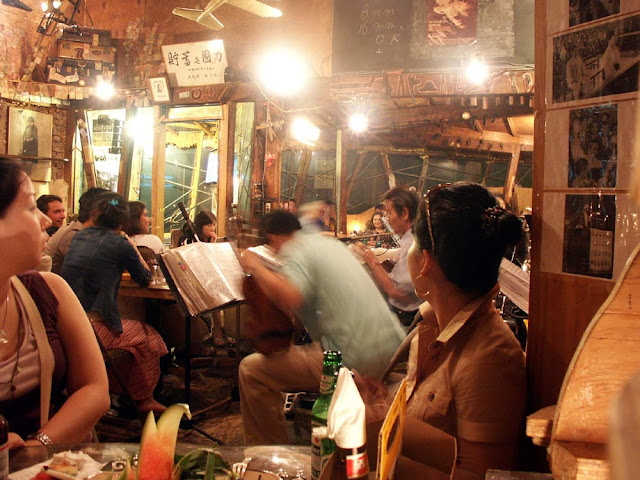 As I said - not your usual birthday party!
Posted by Simon at 09:00

That nightclub would qualify for any allotment shed construction competition...
were the beams placed to accomodate a job lot of trapezoidal pieces of glass?
T

Happy Birthday... Have a good one!

In 1988, I was in Seoul for the summer olympics. I was not teaching, but translating into French English translated from Korean! I stayed there a month, like you, and enjoyed my stay.

I don't recall seeing those skyscrapers. Maybe they were built later. Once, I had diner with friends in a restaurant that looked like your nightclub!