A Cool Place to Be

Last week was so warm that even underground it was starting to heat up - the cave at Chateau Gaudrelle was 13°C - a whole degree warmer than normal. 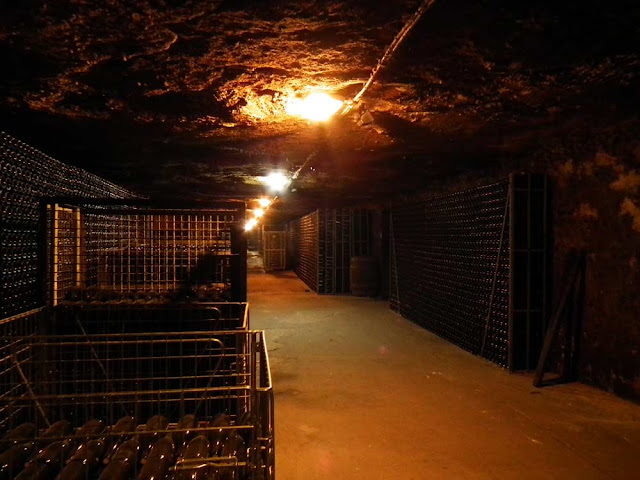 Walking into this after enduring 39° in the shade was no hardship.

7 July 2005: Today is the 10th anniversary of the day I nearly got blown up on my way to work. On 7 July 2005 bombs were detonated on the London Underground and a London bus. I must have been on the train just ahead of the one which was blown up between Aldgate and Liverpool Street stations. The American intern of a friend of mine was on the bus which was blown up. He was very fortunately uninjured but very frightened. Apparently he leapt off the bus and ran all the way from Russell Square to Gray's Inn where my friend's office is. He recovered his composure quite quickly and was rather embarrassed when his parents insisted on coming to London to check that he was OK.

By the time I got into the office it was clear something was happening. We used all our contacts to keep abreast of events. Basically we were trapped in the office as police and ambulances screamed by. Eventually hundreds of people from the City offices started walking home. Most people, like me and my colleagues lived at least 10 miles from our workplace. The mother of one of my colleagues worked for an ambulance company. They were on standby and had been for hours. They were bored and wanted some action, so they offered to come in and pick us up, on the understanding that if they were called into action they would just dump us on the street wherever we happened to be. They were delighted to come in to town and see what was going on and we were delighted to have some hope of getting home that night.

In Liverpool Street Underground station on a good day. 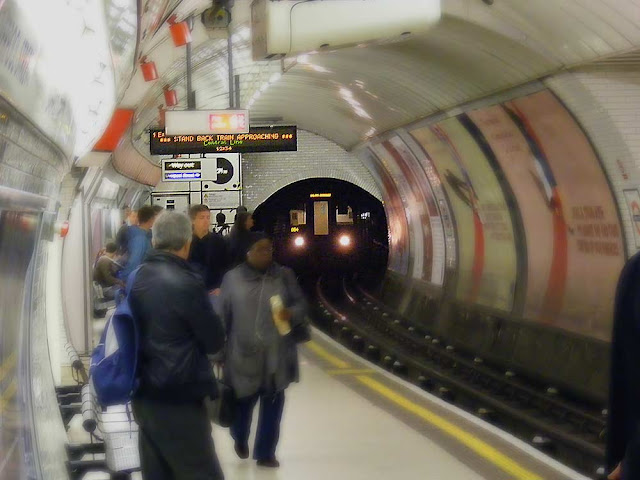 The ambulance men were extraordinary. They weaved expertly through the traffic and people, talking all the time to their base and other colleagues on a collection of radios and mobile phones. Their concentration on the job was magnificent, but they were also enjoying themselves. At one stage we came to an intersection. The cars approaching on the other axes were all police cars. The ambulance took precedence. After dropping several of my colleagues off, I was the last one left and we headed for the depot, which was as far as they could take me. I would have to find my own way from there. Luckily, there was a taxi who had just dropped someone off at the depot and I convinced him to take me home.

Later we found out that a friend of our finance manager had lost both his legs in the attack and every day I passed the memorial plaque in the Underground station to those killed I thought of them and their families.

I was going to say you were lucky that day, but I think what I mean is you weren't one of the unlucky ones.
A friend of mine had a similar experience many years before when she walked out of the Kings Cross tube station about five minutes before it caught fire and several people were killed. Litter and cigarettes were blamed I think.
Every time we get held up by a nasty accident on the motorway I count my blessings that we hadn't left home just a few minutes before, or it could be us that the lorry smashed into or whatever.
There's a lot to be said for living as far away from terrorists or idiots as possible and definitely for not being in the wrong place at the wrong time.

I thought Susan was the person caught up in 7/7?
So you both were... not a nice anniversary to be reminded of each year...
and every time you pass a 7/7 shop...
the Leeds-Bradford-Sheffield conurbation has bred wonderful music...
and terrible tragedy...
and I just don't understand why the latter at all!!
Do something nice today for yourselves, whilst thinking of others...
Tim

As Jean said, it's all about place and time. Glad you picked the right one. Our thoughts are with the friends and relatives of the ones who didn't.

I agree. You had a near miss and are aware that it could have been so different, as it was and still continues to be for so many other people. Lives were changed forever, not only amongst the victims and their families, but also the emergency services who gave such wonderful care.