On 19 July I was picking nectarines in the orchard and a blue butterfly caught my attention. That's a blue butterfly in the sense of a member of the Polyommatinae subfamily of butterflies, which are known by enthusiasts as 'the blues' since most members of the group are blue. This particularly butterfly wasn't especially blue. More a sort of grey mousey brown. It was moving very quickly and the weather was breezy, but my impression was that it was fairly large (for a blue) and something different.


Long-tailed Blue photographed in the orchard on 19 July. 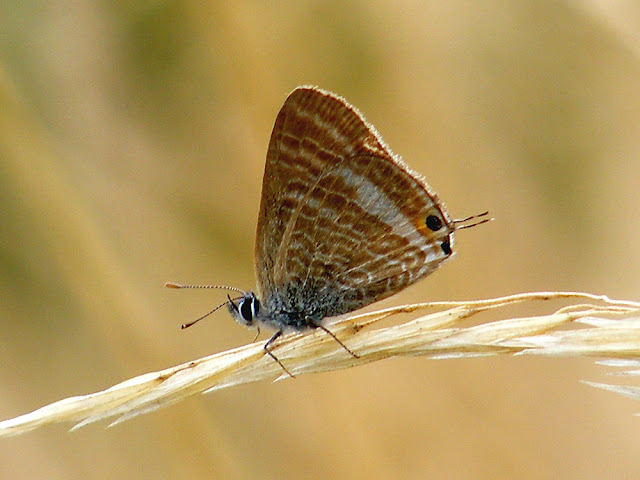 It helps that I only usually get two species of blue in the orchard -- Provencal Short-tailed Blue Everes alcetas, which is tiny, and Common Blue Polyommatus icarus, which is generally medium-sized, but varies quite a bit in size and underside colour. This grey brown butterfly looked a little bigger, and didn't seem to have a strong pattern of spots on the underside. Occasionally I get something different pass through the orchard, and I had an inkling I'd seen this species once before a few years ago. In fact, I'd been wondering if I'd see any this year, with the weather being so extraordinarily warm and dry.

As I suspected, it turned out to be a Long-tailed Blue Lampides boeticus. This is a more or less cosmopolitan species, the only butterfly that I get here that I could also have got where I lived in Australia. Although it is quite abundant in the south of France records further north are becoming increasingly rare and depend on migration patterns which differ every year in response to environmental conditions.


A male Long-tailed Blue I photographed in the orchard in September 2010, the only other time I have seen this species. 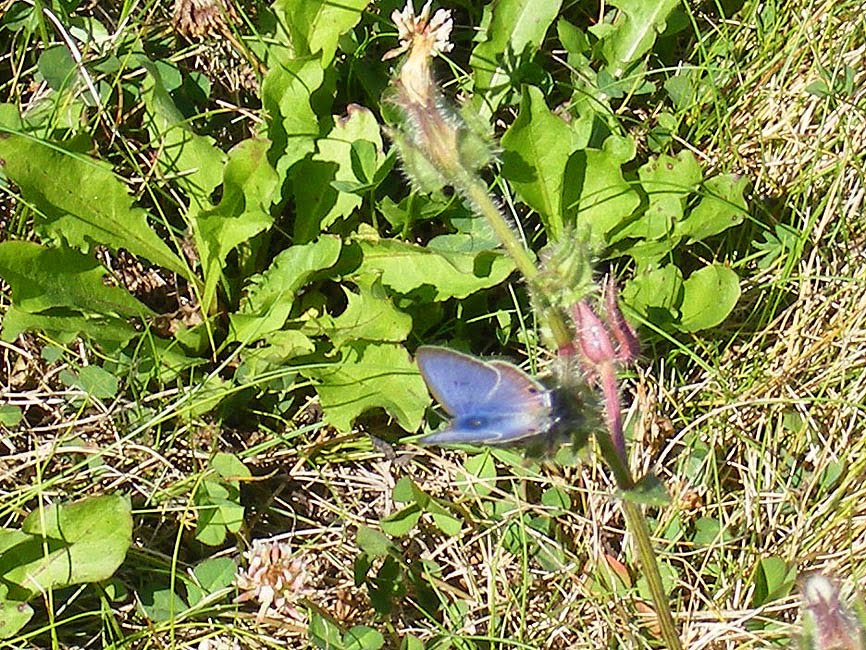 The orchard and potager are perfect habitat for it, and they will use a variety of pea family plants as caterpillar hosts. Broad-leaved Everlasting Pea Lathyrus latifolia, Garden Pea Pisum sativum, Green Bean Phaseolus vulgaris and Alfalfa Medicago sativa are all known host plants and all abundant in or near the orchard.

Although I only got photos of one individual I think there was at least one other flitting about. I am surprised that it doesn't seem to establish itself in the Touraine Loire Valley, but perhaps it is too wet or cold over winter.

For the butterfly nerds amongst you, here is a list of the Polyommatinae which have been recorded the Touraine Loire Valley in the last 100 years or so (not necessarily by me). They are a tricky group and I've only seen a third of them (the ones with links to photos) :

Nice spot, Susan...
I think I must take time to have a wander around the meadow and see what else is out there!

To other local butterfly nerds...
and regular spotters locally...
sightings like these now need to be recorded on Faune Touraine...
and for Susan and Elizabeth... in addition to your transects reports....
the data for which doesn't get fed back to the Faune Touraine site!!

I know, I know...I'll have a blitz in the winter on Faune Touraine. I have finally got around to registering with them now!

It really needs to be done on the day, or within a couple of days after.
You can do back records, but their system doesn't like it.
P

OK I've done it, with photo. They are obviously going to check it as it appeared in red. I submitted a record with photo of a Common Blue as well so they could be reassured I knew what I was talking about. The photo of the LTB will confirm the record anyway. No mistaking it.