Domaine de la Paleine make wine in the Saumur and Anjou appellations. Their particular schtick is that the wines have names with a musical reference. It can be a bit difficult to follow, as each year, as the vintage changes, so does the name of the wine from some of the parcels. The Domaine is 39 ha and they aim for a yield of 30hl/ha. This is a very low volume, but gives high quality. The usual standard of 45hl/ha gives a high volume but rather diluted wine (one of the reasons I'm generally not a fan of local cabernet franc). They grow chenin blanc and cabernet franc. Real corks are used in the bottles, with the best wines getting high density Portuguese corks costing 75c each, while wines meant to be drunk young get cheaper 20c corks.

Chenin blanc is a variety that persists along the Loire from Tours to Angers. It's often grown in sandy soil, where it resisted phylloxera. It is the original grape variety for this area. Chenin blanc is grown in South Africa too, after having been taken there by the Huguenots. Known as steen in South Africa, it is used to make an off-dry wine. 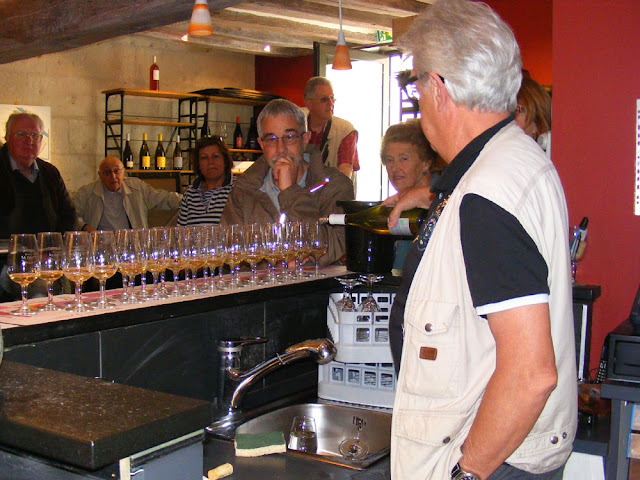 Cabernet franc was introduced to the Touraine and Anjou much later (by Richelieu in the 17th century I think).

Alain Bonnot runs the Domaine de la Paleine tasting cellar, which is conveniently located just opposite the Diane de Méridor Michelin starred restaurant in Montsoreau. On the river, within sight of the cellar, is the Toue (flat bottomed river boat) Milady, commissioned by the Domaine from a local boat builder as an events venue.

Alain was a bit grumpy when we arrived. It was a Sunday morning (most wineries are not open on Sundays) and he had a cold. Luckily, when he discovered that our group knew a little about wine and were eager to learn more, and that I was Australian, he warmed to us. In the end he got quite carried away, offering us several wines we hadn't expected. It turns out his wife is Australian, from Melbourne, and we had a nice little discussion about what we did and didn't like in Australian wines (chardonnays -- often great, most reds -- usually way too overpowering and oaky).

The storeroom in the tasting cellar. 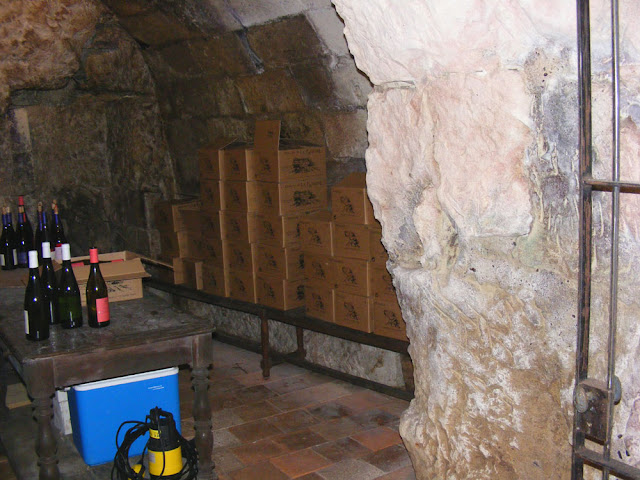 The tasting started with Saumur chenin blancs. These must have less than 8g/l of residual sugar and the Domaine de la Paleine produces them organically, with no oaking. Alain explained that chenin blanc picks up sulphur (occuring naturally in the grapes but also used to clean barrels and ensure fermentation has ceased) very easily so the winemaker has to be super careful. It can be detected by a sort of wet dog smell to the wine. The 2012 vintage is called Toccata, 2013 is Arpeggio (€9.50/bottle) and 2014 is Prelude.We went on to have the Arpeggio with our lunch of asparagus starter and pike-perch main in the Diane de Méridor.

Then we moved on to the Anjou 2013 organic chenin blanc called Pamina (€12.50/bottle). It comes from grapes on limestone rich soil, imparting a certain 'nervousness' to the wine apparently. This has more than 8g/l of residual sugar and is fermented in stainless steel vats and aged in the barrel (15 months for this vintage). The winemaker manipulates this wine each year by adjusting the length of time it spends in the barrel to keep it more or less constant each vintage. He is trying to balance the wood with the character of the grape. This wine will age in the bottle 10 years with no problems. The 2013 is not really ready yet. The oak will fade and it will be better in 5 years time.

Once the residual sugar levels reach 12g/l the wine is called a demi-sec. If it has more than 18g/l (like Coteaux du Layon further to the west) it is really important to balance all that sugar with fruitiness. Sweeter wines grown on sandy clay are more robust, those grown on limestone are more rounded. The Domaine de la Paleine 2010 Anjou Demi-sec (€35.10 per 10 litre box) is a much deeper colour than the drier whites. The grapes for this are harvested when very ripe, at the end of October. Unlike in Coteaux du Layon there is no botrytis used. If the grapes are left until the end of November botrytis will appear, but by then all the pickers have gone home and the weather is unreliable. The Anjou Demi-sec gets 16 months aging in oak. 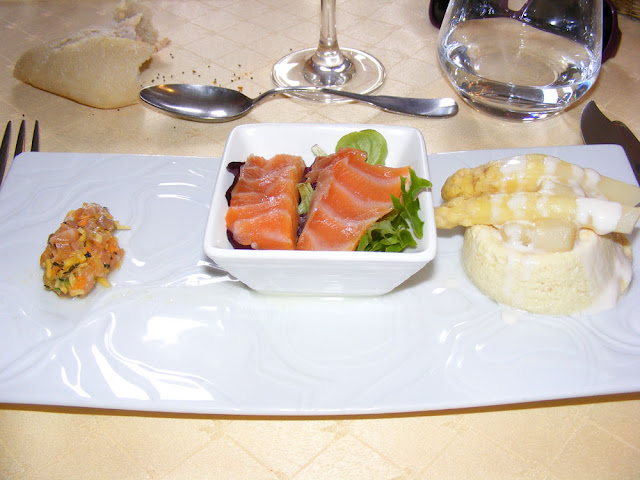 Coteaux de Saumur (€16.50 per 50cl bottle) is a late harvest wine with 24g/l of residual sugar, always sold in half bottles because the yield is so low and there is never much produced . The term "Coteaux", which means "hillsides" or "slopes", is often used in wine names to indicate that the wine is sweet.

Chenin blanc makes an excellent sparkling wine, using the traditional method (the same as champagne but you are not allowed to say that due to the Champagne producers being so litigious...). We tried a sparkling Saumur chenin blanc (€7.60/bottle).

Everyone in the Saumur appellation also makes a sparkling rosé, although not everyone does the whole process on their own domaine. If they don't have the space they will sell their base wine to the big producers such as Ackerman or Gratien et Meyer, who are making huge quantities. The small producers who do commercialise their own rosé are all reliable and aiming for the highest possible quality. The Domaine de la Paleine version (€8.60/bottle) is 60% cabernet franc, 40% pinot noir and extra brut (ie with no added sweetness).

The Diane de Méridor is on your left... 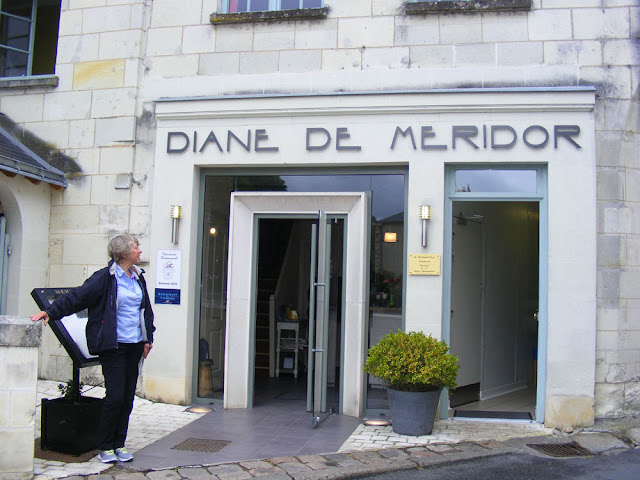 The area also makes crémant (€12.10/bottle), which is aged longer (24 months sur latte ie on its lees, then one more year to develop). Domaine de la Paleine also do a sparkling red (cabernet franc, €7.10/bottle) to be drunk young. It's sweet, in the Lambrusco style, and in French known as a vin mousseux. It's not traditional, so not sold as an AOC wine.

Finally we came to the red wines. The first was a 2012 Saumur Champigny cabernet franc (€9.10/bottle). The appellation is the communes of Saumur Champigny and Montsoreau. The grapes are hand picked and fermented in stainless steel. The taste is very pure. For the 2013 vintage they were so concerned about the quality of the grapes for this wine, because of the poor year, they sorted them, destemmed and hired a high tech optical sorting table to take out the rotten grapes.

There are 69 wine appellations along the Loire, reflecting differences in soil. The Domaine is one of only 24 producers to be admitted to the new Saumur-Puy-Notre-Dame appellation. These are vineyards south of Saumur, 20 km from the Saumur Champigny appellation. The reality is that the Domaine de la Paleine has been making wine there for 20 years. They pushed for the new appellation to be granted, to try to raise the quality of all the producers. All producers in the appellation are required to be organic, biodynamic or agriculture raisonnée.


...and on your right, the Domaine de la Paleine tasting cellar. 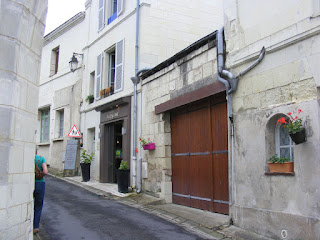 Their Saumur-Puy-Notre-Dame Tamino (€12.50/bottle) uses the best grapes and is fermented in stainless steel but aged for 15 months in old oak barrels. The 2010 vintage is good but could be kept a couple of years. The 2009 is more rounded.

The Saumur-Puy-Notre-Dame Moulin des Quints is their best known wine and the 2009 (€16.50/bottle), which is the oldest they have, is perfect at the moment. It is not too woody. It's made in an old fashioned style, in large 600 litre open barrels, which is a lot of work.

an interesting informative post BUT I have to ask the question "What difference does a cork make?" The object being to seal the wine bottle... The cork adds nothing to the wine so what is wrong with a screw top? Traditionalists!!

What a fascinating post! I'll have to keep a link open to it so I can keep referring back to it. I must join in the debate about the difference a cork makes. To the wine, well you can't lay down a bottle with a screw top, otherwise not much, but to the Spanish Imperial Eagle and the other wildlife that uses the unique cork oak forest habitat in Spain, it's the difference between life and death. No cork, all the trees are pulled up and the land put to cereals. No more habitat, no more wildlife. Pauline

Are you sure about the Michelin star for Diane de Meridor? It used to be a Bib Gourmand but now I don't think it's even that.

Tout d'abord, it's the French consumer who's the traditionalist, not the winemakers. The winemakers would happily switch to screwcaps for the wines that are intended to be drunk young if the consumer will buy them. For the wines intended to be cellared the cork and its quality make a big difference. The cork allows an exchange with the atmosphere that a screwcap does not. Wine in a screwcap will age so slowly you might as well not bother. Winemakers choose the appropriate cork density based on how long they expect the wine to need to age in the bottle. The Portuguese cork producers have not done themselves any favours in the last couple of decades, by not maintaining the quality of their corks. A few fed up producers have switched to artificial corks, made in Germany and also graded according to how long the wine has to last in the bottle. Artificial corks must also be cheaper, as wines at the cheaper end of the market tend to have them. As far as I know there is nothing in any of the AOC rules about corks, which is interesting. It's totally the winemaker's decision as to what they use.

I have no idea where I got the information! I think you must be right that it is not starred though. I can't find anything about it.