Johann Spelty represents the fifth generation of his family to be winemakers in Cravant les Coteaux, one of the most highly regarded villages in the Chinon AOC. The estate was originally 40 ha, but over the generations the French inheritance practice of equal shares to all children have whittled Johann's portion down to 15 ha.

He grows cabernet franc, mostly on deep gravelly soil, but he also has a terrace of flinty clay. The estate is in the process of converting to certified organic. The harvest is done manually and takes about a week. Johann makes a lot of half serious remarks when you go for a tasting session about how visitors would be welcome back at harvest time to work. He doesn't get a lot of visitors to the estate and my impression is that he would like to see more (not necessarily for the harvest really, but coming for a tasting session and ideally, buying).

The grapes are macerated for 3 - 4 weeks for the alcoholic fermentation, using only the yeasts naturally occuring on the grape skins. Then the liquid is allowed/encouraged to undergo malolactic fermentation. Sulphites are used judiciously and the wine is filtered.

Johann's bottling plant, with temporary table for a tasting session set up in front. 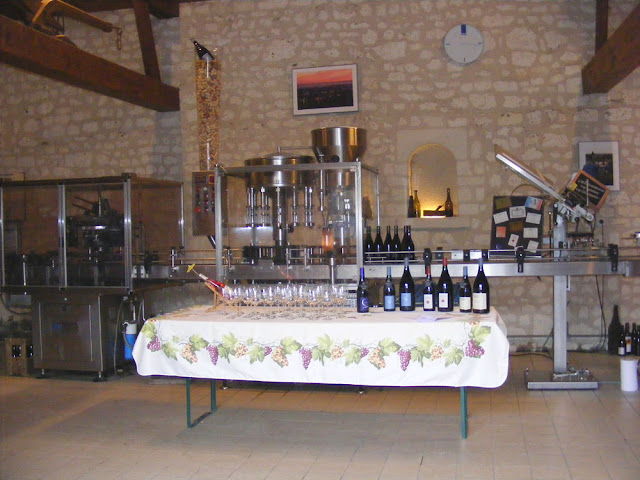 Johann produces 80 000 bottles a year. Most are sold to restaurants, some to independent wine shops. Absolutely none are sold to supermarkets and he bridles at the very idea.

When I visited with a group in early June we tasted the following:

2014 Chinon Rosé Le Chic, €6/bottle: a charming rosé with 2.5g of residual sugar. Johann believes that many Chinon makers produce rosé that is too dry and acid. His approach is to leave enough sugar to round the wine off. There is no sensation of sweetness, just a well balanced wine. 60% of the cabernet franc grapes used to make this wine go in the press whole, but this doesn't give him the colour he wants. He increases the pressure at the end and blends with 40% which have been macerated with their skins to add colour. Each winemaker has a particular colour they want to achieve. Making rosé is quite a technically precise process and Johann will be up at midnight checking the colour during the early stages. Rosé tends to be darker in the south west, and a very pale 'onion skin' in the south.

Johann (on the right) with Robert Boutflower from the UK wine merchant Tanners. 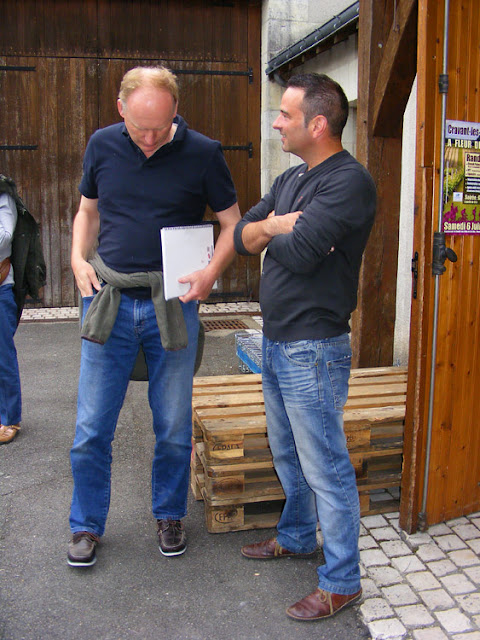 2013 Les Folies, €6.70/bottle: this was a very tricky vintage. Initially the vines put on a lot of growth, but on 9 June there was a hail storm and the vines were 30 - 90% stripped of their leaves and tendrils. At that point there were tiny grapes the size of peppercorns which were also stripped. This sort of damage, with its risk of fungal outbreak, is very difficult to treat. It was followed by 90 mm of rain, making the situation much worse, and he resorted to treating the grapes individually with a back pack of fungicide. He lost 50% of the expected harvest and this wine is less fruity, with more tannin than he would have liked. A little sulphite was added at the beginning to prevent oxidation. Because the vines lost so many leaves photosynthesis was impeded. There weren't enough leaves left to provide the energy to properly develop the remaining grapes. A severe hail storm like this in June is too late for the grapes to recover and replace the leaves. If it happens in September the grapes are at peak growth and the vines can cope. The risk at this later time of the year is direct damage to the grapes either splitting or getting fungal diseases.

2009 Graviers, €9.50/bottle: The Graviers wine is made from grapes grown on the gravelly soil, giving a less fruity table wine with weight and roundness -- a serious wine. The fermentation is controlled by immersible paddles which both heat and stir the juice. He has returned to using stainless steel vats for this one because of their small surface area and the level of control he can get now. He keeps a portion of this wine back each year in the Spanish tradition as it is better when aged. He feels it will be ready at the end of 2015 and he will release the 2009 in 2016. It will go well with red meats and strong cheeses. Johann believes that winemakers should allow the wine to express itself, it should not be forced. He is especially critical of the widespread practice of thermovinification, but notes that new consumers in the market are causing a change in wine tastes (I assume he means the Chinese here). He comments that mature wines are rarer and rarer these days and there is a tendency to drink vintages too young, especially with Chinon. Too many winemakers are cutting corners to reach 'drinkability' too quickly. He cites thermovinification and micro-oxidation as the two main culprits. You can identify a thermovinified wine by its banana nose apparently.

2009 Clos de Neuilly, €10.50/bottle: Grown on pure limestone this is a classic Saint Nicolas de Bourgeuil or Chinon style wine, a little sweeter than the Graviers. The wine is not made in barrels, which give too big a surface area, concentrating the wine and making it more intense, but not more rounded. Instead Johann uses either stainless steel or cement tanks, which are epoxy lined for ease of cleaning.

Johann's way of telling you that his rosé is for relaxing summer holidays. 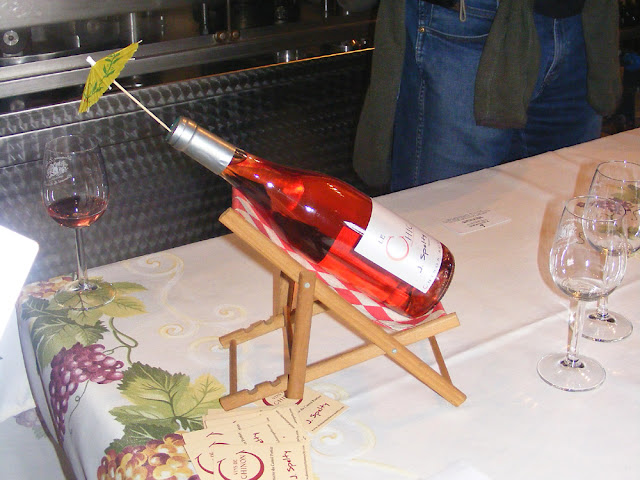 2005 Graviers, €15/bottle:  In 2005 there was no frost and lots of sun. This wine has spent 30 months in cement tanks. It is fresh, woody, garnet coloured, not faded. It is only available if you know to ask for it -- he keeps it as a treat for his local and loyal customers. He says it is to give them an idea of what is possible, a flagship product, only available if you visit the estate.

To me a "banana" nose means aldehydes in the brew...
as does the "pear drop sweet" smell... both to be avoided at all costs in beer!!
Possibly slight amounts in a strong wine are 'acceptable'?

Rosies are meant to be drunk in their first year... so they only get the Spring to lounge around in deckchairs!
What a lovely idea, tho'...
Tim

Will have to pay then a visit...

I think he's talking about the same thing with the banana nose. It just makes nasty wine.

The blog post is written from notes I took on the visit. Maybe I mistranlated or misheard something. If you plan to visit make sure to phone for an appointment. It's the sort of place there could be no one around if you just turn up.