The Chateau de la Presle is the family home of winemaker Anne-Sophie Penet. The next door estate, Domaine du Boulay, is owned by handsome Burgundian winemaker Fréderic Meurguy. She took over from her father Jean-Marie in 1998 and very sensibly got married to Fréd , merging the two businesses. 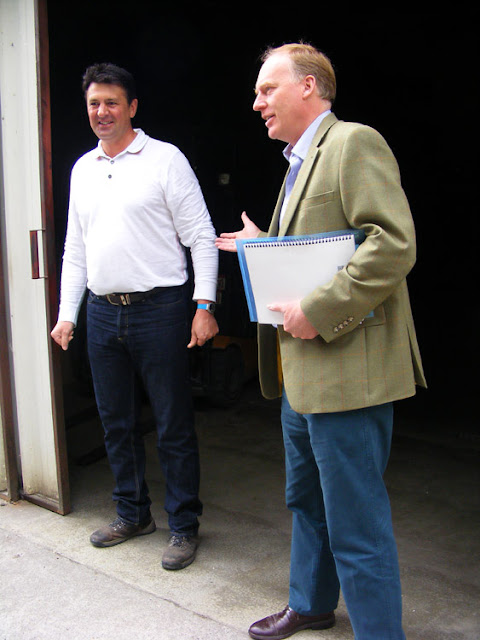 The estates are situated on the Oisly plateau, between the Loire and the Cher rivers. The soil is sandy on top with clay underneath. They are in the Touraine AOC, part of the  Loire wine growing area, which is 600 km long, with 69 appellations -- some of them large like the Touraine, some of them tiny, like Quincy. 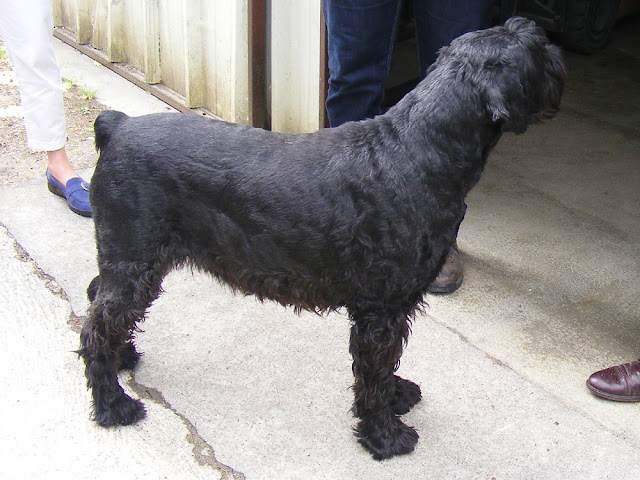 Fréd showed us around the winemaking facility. He told us that their whites, sauvignon blanc, are destemmed, pressed, the juice left to settle then it is put in tanks and fermented. The reds, pinot noir, are destemmed too. If the grapes are not destemmed the wine will get a stalky flavour, but it will have more body. With destemming you get a more fruity flavour coming through. This is a strictly individual decision for each winemaker to take. For example, sauvignon is often all nose and no body, so some prefer to leave the stems. 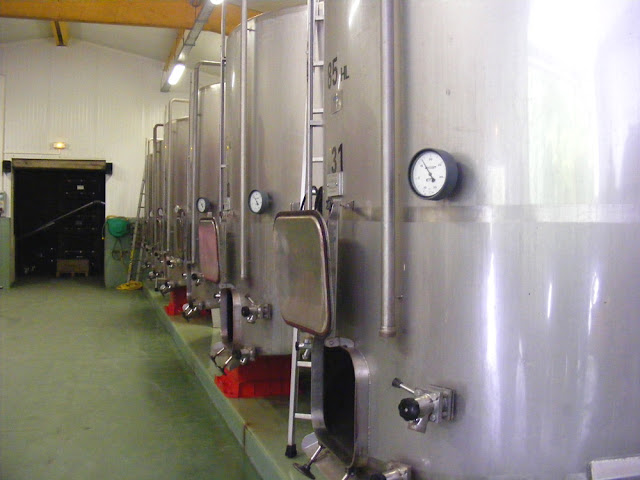 There are a variety of tanks in the chai (pronounced 'shay', where the wine is made). There are red conical ones are used for letting the wine settle, when the winemaker is not so worried about temperature. Their shape means that the fermentation process keeps the wine gently moving naturally but they are more difficult to clean. The stainless steel vats are designed for ease of use, with bases that slope towards the hatch. For the quickly fermented whites and rosés a means of controlling the temperature is required, and the modern stainless steel vats provide this.


The bottle store (empties waiting to be filled). 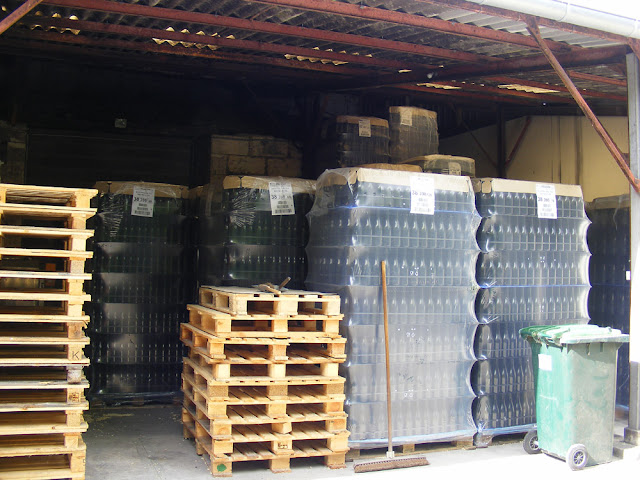 After the quick winemaking primer, we were taken into the cellar for a tasting session. 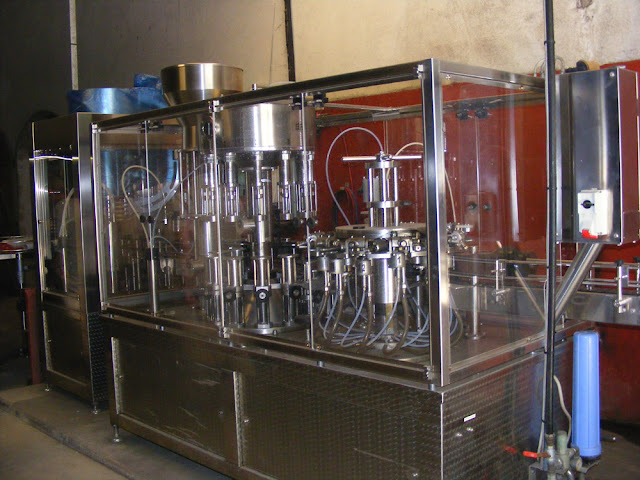 2014 Sauvignon, €5.70/bottle: drink in 2 years or less, with citrus rather than gooseberry flavours, very typical of the Touraine. Not aggressive but nicely balanced, the aim is to offer an alternative to Sancerre or Quincy. 2014 was a terrible year weatherwise, until September saved the vintage. The first half of August was really bad. They normally harvest from 15 September but they left it until the end of September last year. Normally the winemaker calculates 90 days from flowering to harvest but last year the grapes got an extra 15 days because the summer had been so dismal. 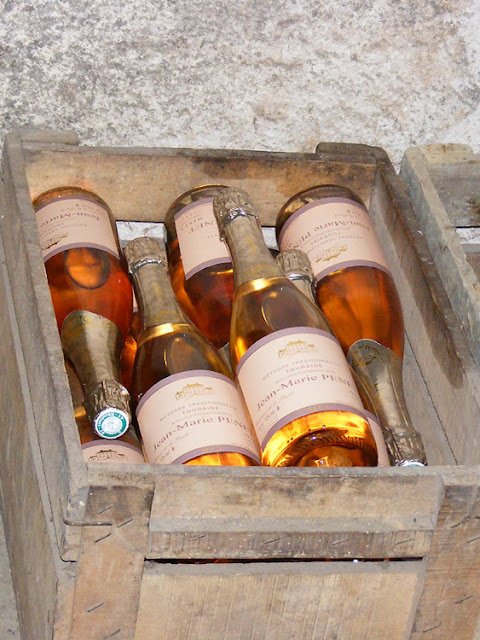 Pineau d'Aunis, €5.70/bottle: Although now a variety very localised in the Touraine, Pineau d'Aunis probably originated in the Charente, to our south west. At Domaine du Boulay it is made by giving the grapes a cold maceration with their skins for 12 hours, then proceeding in the same style as their sauvignon. Their version is very typical of the Touraine rosés made from this variety -- peppery, spicy, pale in colour, a light young wine to be drunk young. The lightness means it is nice just for drinking on its own, with spicy foods such as chilli con carne, or salads and barbecue. 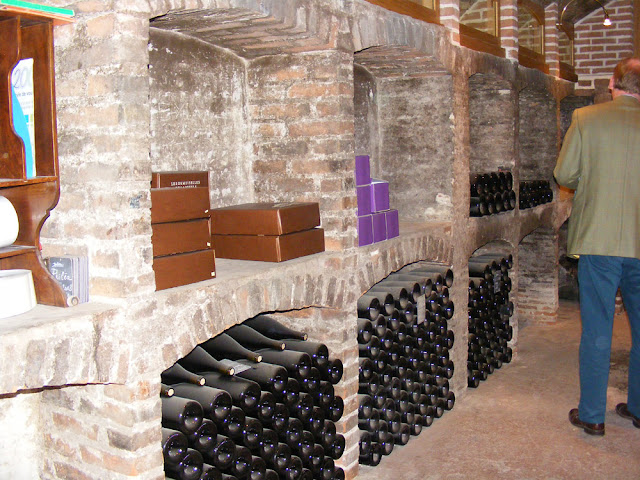 2013 Pinot Noir, €8.50/bottle: This is made in large wooden barrels. It's given a cold maceration for three days then three weeks fermentation. Fréd wants as much colour as possible from the skins. Then the natural malolactic fermentation is allowed to start. When this fermentation is going on in a winery you walk in and the whole place smells of apples due to the malic acid in the wine at this point. The winemaker can choose to suppress this type of fermentation using lactic bacillus, but on the other hand they sometimes force it because it gives the wines a longer shelf life. It only happens if it gets warm enough and it takes time to properly go through the malolactic cycle. Fréd has harsh words to say about winemakers who don't give their wines enough time, but from talking to others it seems there is more and more pressure from buyers who want to get their hands on a new vintage, earlier and earlier, even at the cost of the wine not being properly ready. Pinot noir goes into malolactic fermentation naturally and very easily in wood. Gamay does too, even more easily, once it reaches 25°C, but is often only given a very quick malolactic cycle because it is meant to be drunk young and fresh. Pinot noir and other reds should be done at a lower temperature and slower. The Domaine does not allow malolactic fermentation in its sauvignon blanc, and stops it with a small dose of sulphites.


Fréd, staggering under the weight of our purchases. 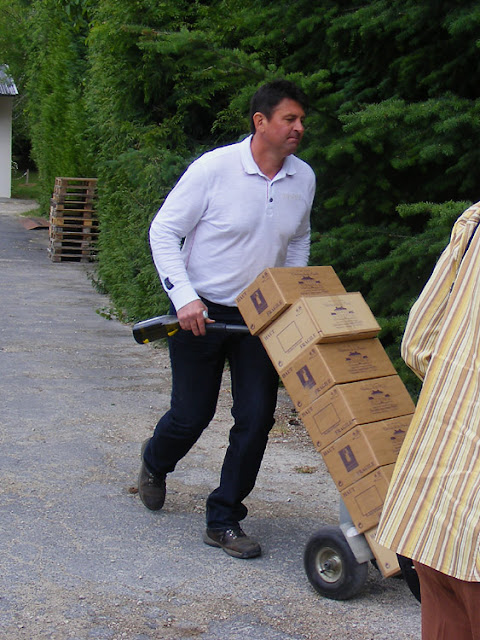 Crémant, €7.50/bottle: The Domaine produces 180 000 bottles in total per year, of which the sauvignon blanc is the most important. They also produce 15 000 bottles of sparkling in the form of crémant, made from 70% chardonnay plus some chenin blanc and pinot noir. The grapes are hand picked into small shallow open boxes and processed using the same method as champagne. The crémant has good depth, with 4g per litre of residual sugar, quite dry, like an extra brut, but it is technically a brut (due to the residual sugar level).

********************************************
Local History Blog: A member of the Société Archaeologique de Preuilly (SAP) has created a blog to publicise the club's activities and make available online old issues of the Cahiers de la Poterne, the club journal. If you read French and are interested in the Touraine it will be a very useful resource.
*************************************
Organic Vegetables: Yesterday I went to the Vergers de la Petite Rabaudière for the first time. Tony and Sylvain, who own the place, are organic market gardeners just outside of Preuilly. On Tuesday evenings between 5 and 7 pm they sell direct to the public. Produce is stacked up in their shed and you choose what you want then get it weighed. The prices are posted on a large whiteboard. I bought carrots, two types of tomatoes, a lettuce, aubergines, runner beans, a cucumber, green and purple peppers and potatoes for €14.50. The prices are good, the atmosphere friendly and despite the apparent chaos with people coming and going they are in fact very organised. When I was there a young woman asked a question about beekeeping and was given lots of helpful advice. I'll be a regular from now on.

Anyway, despite my skepticism, this was delicious and I would make it again. I used sour cherries and raspberries, sweetened a bit more than the recipe suggests, and with regular sugar. Since I can buy coconut cream in tetrapaks at the supermarket I didn't have to faff around skimming it off the top of coconut milk, but I did chill everything as recommended. I also reduced the quantity of vanilla by about half.

The coconut was by no means overpowering and was in fact rather pleasant (Simon said he didn't realise it had coconut in it). It's not a flavour I think to use much, so it was a nice change. I don't know what effect this Western craze for all things coconut the last few years has had on areas that grow coconuts. I hope it's not another palm oil, or even another cacao or coffee. Likewise the chia seeds (although I seem to remember that they are now grown in Australia, well outside their traditional homeland, so perhaps there aren't the problems such as are associated with quinoa).

*******************************************
Archiving the Blog: Days on the Claise has been selected by the National Library of Australia to be archived in their Pandora repository of websites and online publications relating to Australia and Australians. Whilst I've no doubt we are amongst hundreds of others, we are very flattered to have been asked and that our blog is considered worth archiving. It will give our blog a lifespan beyond the current technology and make it available to readers indefinitely.
Posted by Susan at 09:00