The Lights Go On All Over the House

After a pause of 18 months when no work on the house took place, a little gentle bricolage has now recommenced. We didn't intend the break to be so long, but renovating takes it out of you.

Sitting in boxes in our graineterie we have the light fittings for almost every room in the house.  The bulk of the wiring for the house has been done for a couple of years, and so putting the two together is a quick win.


The office light in action. 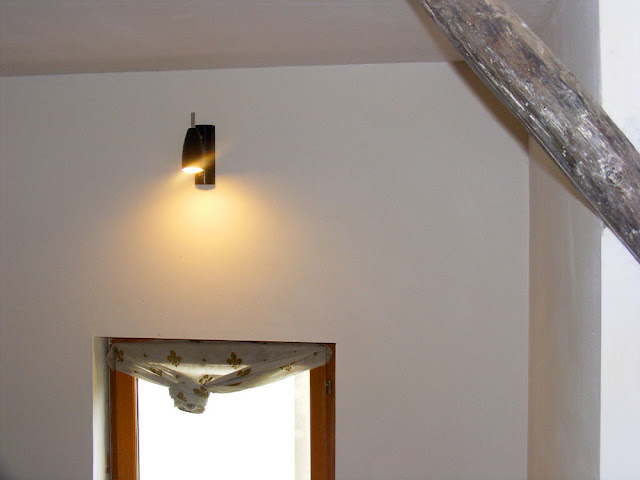 Simon has fitted the wall light in the office. Up till now we have had a light bulb hanging precariously from some exposed wires. It worked, but wasn't elegant. Now we have a neat black metal 'officey' looking light fitting above the window.

He has also drilled out a hole in the stone and fitted the va-et-vient (two-way) switch for the dining room, which was previously just swinging about on its cable. Now one can switch the dining room light on or off from by the sitting room door or near the kitchen door without it seeming like a foolhardy thing to be doing.


The new kitchen bench light does its thing. 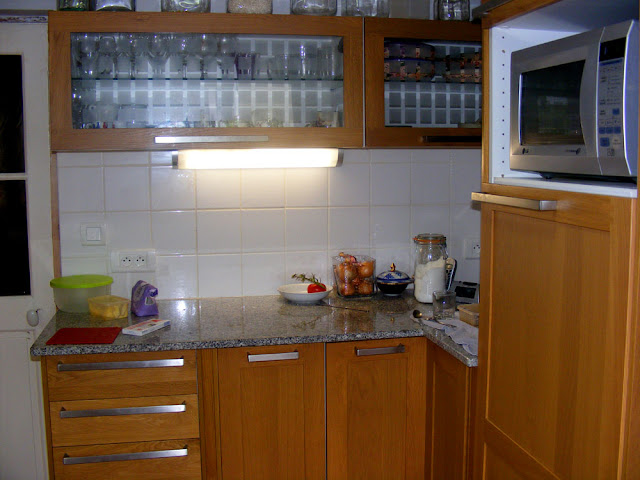 In addition, he's attached the under cabinet light over the kitchen bench, narrowly failing to electrocute himself in the process. Previously we had been using a desk lamp sitting in the angle of the bench, plugged in to one of the kitchen appliance powerpoints, while a piece of bare live cable stuck out from under the glasses cabinet. The newly installed light is nicer than I remember it being. I'd had my heart set on a rather expensive light that we reluctantly decided we did not wish to spend the money on, and we were having difficulty sourcing it anyway, so we bought a cheaper, less stylish one. With some distance now, I think the bench light looks great.
Posted by Susan at 09:00

Email ThisBlogThis!Share to TwitterShare to FacebookShare to Pinterest
Labels: electricity, Kitchen, Our house in Preuilly

For a moment, I had a vision of your kitchen a few yeas ago. Wow! To say that's such an improvement is an understatement. It looks really great.

Lighting makes an enormous difference and yours looks good. You'll also have more room to work!

I like that light over the work surface...I had this in France and it was invlauable to someone with limited sight.

Here I have no top units so I'm using your first solution...a reading lamp for the bits that need attention.