Eyes on the Hairstreaks

There is a received wisdom that the false eyes that form part of the pattern of many butterflies has evolved to allow them to fool and thus evade bird predators. However, one researcher in the US recently wondered if it might be used against a much smaller, but perhaps deadlier butterfly predator. He began to conduct tests with an American species of Hairstreak butterfly, a member of a family of similar looking species that exists more or less world wide. 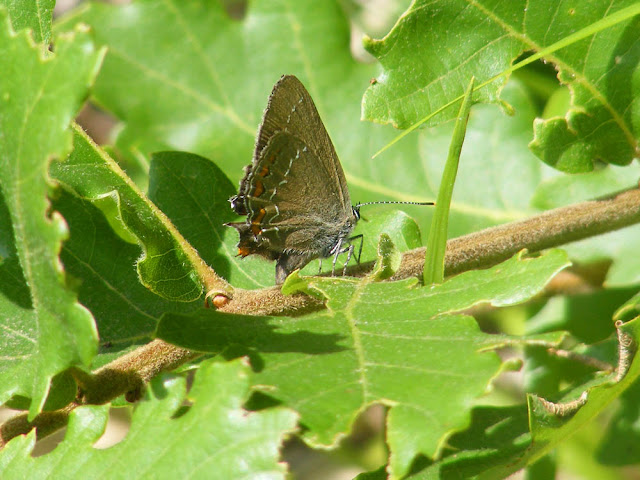 He discovered that his Hairstreaks successfully evaded jumping spiders every time, despite laying their eggs in an environment where the spider was abundant and persisently hunting. When he tried the jumping spiders on other species of lepidoptera, the spider caught the butterfly or moth every time. His conclusion was that Hairstreaks had evolved false eyes to evade spiders and other small arthropods, not birds or other large vertebrates. 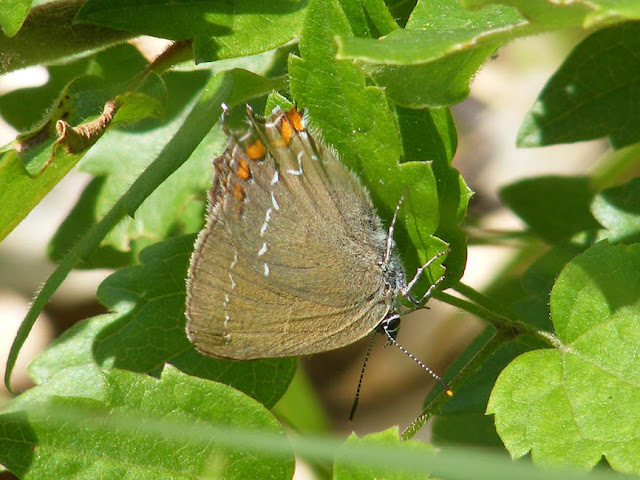 With the Hairstreaks though, it's not just a matter of having false eyes. They have a false head, made up of the eyespots and their tails. The butterflies shuffle their wings constantly, as if they are drawing attention to themselves, and indeed, the scientist, Andrei Sourakov, noticed that the shuffling and shimmying increased when there was a spider present.  The spiders seem to be hard wired to attack what they think is the head end, and will carefully move around a butterfly in order to position themselves appropriately. In the case of the Hairstreaks, the spider always attacked the false head, not the real one, and as a result, many Hairstreaks lose that section of their rear wings, but live to fly another day. 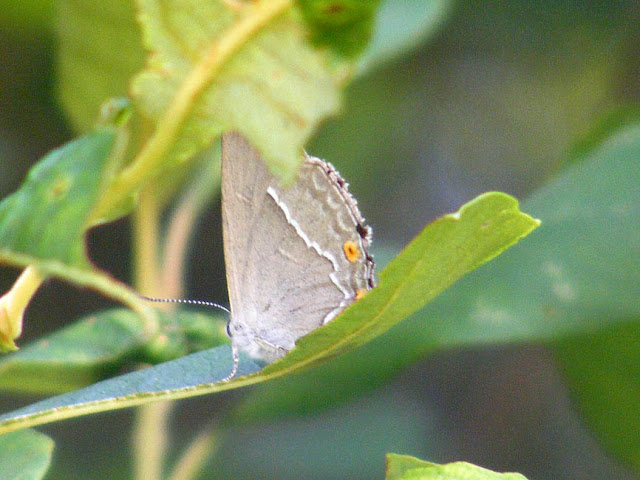 I suspect that this behaviour and evolutionary response also applies to other false eyed and tailed butterflies, such as the Short-tailed Blue Everes argiades and the Long-tailed Blue Lampides boeticus. I also think that the arachnid enemy here might be crab spiders. I've seen several of the beautiful red and black crab spider species Synaema globosum lurking about in the same Downy Oak tree at Chaumussay that I know the Ilex Hairstreak lays eggs in. They are less than a centimetre long, but will take prey the size of a Honey Bee.

The study also calls into question the visual acuity of these spiders -- maybe it's not as good as previously believed.
Posted by Susan at 09:00

Very timely and will add to my information on adaptations, which I happen to be teaching... on Friday!

Nice to read about butterflies on such a miserable day!
And tareversuch for the link.