The locals, even my French botanist friends, do not regard Lizard Orchids with much fondness. When we go on orchid outings, Lizards are rarely recorded. In fact they are common here, but they are dismissed as nasty stinking things by virtually everyone.


Lizard Orchid in our neighbour's orchard. 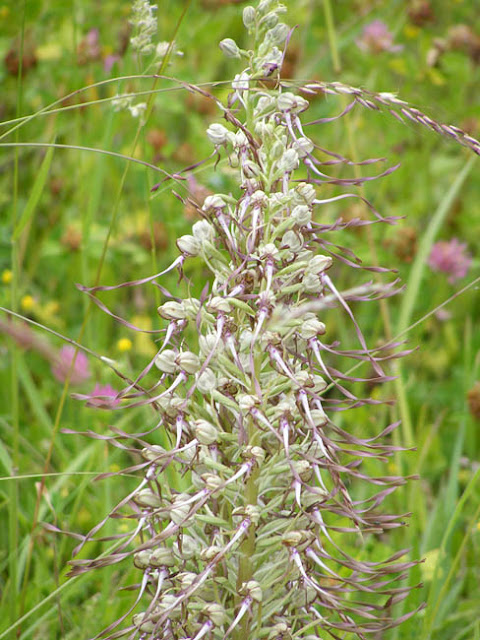 Their French name translates as 'billy goat orchid'. It's rather a shame, because while they certainly can smell off-putting (like unwashed bottoms I always think) it varies considerably from plant to plant, and on the temperature. Mostly they are not very scented at all, but local people dislike them and don't find them attractive. This means they are frequently mowed off in their prime.

Personally, I love them. They are tall and a most unusual colour - a sort of silvery purple, with festive twisting streamers. I wonder what can be done to make the French love their Lizards? After all, in some places this is a rare orchid, cherished and protected.

If you want to learn more about Lizard Orchids, please go the species account on Loire Valley Nature.

****************************************************
All Safe on the Mammarian Front: I went for my follow up check yesterday in Loches, after my mammogram in March found a small spot in my left breast. I am happy to report that the spot has disappeared and the diagnosis is that it was probably a cyst (pronounced 'kist' in French). The doctor I saw was of the kindly, reassuring, grey haired variety and explained to me, when I asked, that the dozen or so bright white 2-5mm diameter dots that show up on my x-rays are calcium deposits, and entirely normal for my age. They are the remains of previous cysts that have dried up. A cyst is a capsule of fluid that appears on the x-ray more like a pale blob.
****************************************************
Film Suggestion: If you like to practice your French by watching a film now and then, you could do worse than I Love Périgord. Despite the English language name, this is a French film made by French film makers. Occasionally the dialogue switches to English, as some of the characters are English, but then it is subtitled in French. It is the French poking fun at the English and the French in equal measure. It's not the slickest rom-com around, but Bernard Le Coq as Adémar (the father) is very good. It's nice, fun, quite silly light entertainment.

To my surprise, the whole potager is fragrant. I couldn't see anything flowering that I thought could be responsible, so in the end I decided it must be the strawberries. I picked about a kilo of strawberries yesterday. The strawberries are the most maintenance free plants ever. I don't even bother to weed them and never water them. This year I am pleased to note that there is at least one bumble bee nest hidden in a hole amongst the strawberry leaves. I'm worried about the grape vines though. The leaves don't look totally healthy -- I suspect mites.

The Bee Orchids are everywhere and flowering like mad. The most exciting orchid news is that I discovered a new Pyramidal Orchid, completely at the opposite end of the orchard to the other little group. This is a protected species, so it's a particular thrill to have it coming of its own accord. Unfortunately, I only noticed it after I had stood on it. That was a downer, as it was just about to flower.

I spent a couple of hours yesterday hacking weeds off in their prime. I don't have time to pull them out, so I'm hoping cutting them off before they can seed will help. The vegetables I've planted out all appear to be thriving (potatoes, tomatoes, aubergine, zucchini, peppers, chilli, celeriac, celery and leeks).
Posted by Susan at 09:00

I like the Lizard Orchids, too... and I have yet to ever get a smell from one... but I cannot smell "goat"... like you, the colour and magnificence attracts me... and the wierd flowers!

I think that this winter has been kind to the Orchids in general... Pauline et moi haven't seen so many in places that we've never seen them before... and the size of some of them, too... some of thye lizards here are already 50cm tall and are still in bud!

Apologies for going totally bee-zerk over the Bee Orchid... but it still excites me... seeing "new" species here...

Glad to read that your mammo turned out OK.

Tim: There are two reasons for the very good orchid year. The first is a wet spring and the second is the high minimum temps, low maximums. They've loved it.

You are entirely forgiven for the excitment about the Bee. They are one of the prettiest local orchids, and that is not diminished by their lack of rarity.

Excellent news that the scan was all clear! :-)

Hello
I'm French and I love those orchids.
Actually I've one in my garden.
In Bresse Jurassienne
They do not stink at all.
I find them funny with their twisted little beards.
Marie jo

Marie Jo: It's great to hear that you love them, and lovely that you've got one in your garden. They seem to like lawns!