(Not) Surveying Butterflies Around Boussay

I have two local survey areas which I monitor for STERF, the long term butterfly study run by the National Natural History Museum in Paris. The first area is around Chaumussay, and the second around Boussay. The Boussay transects are all wetter than the chalky Chaumussay ones, and include some wet natural grassland (dominated by Purple Moor Grass Molinia caerulia), some brande (Besom Heath Erica scoparia scrub) and some forest and hedgerow as well as one transect which runs along a track between two arable fields.


A male Dainty Bluet damselfly Coenagrion scitilum, lurking about in the Purple Moor Grass. While I was photographing him he zapped across to the next blade to catch and eat a small black gnat that had foolishly landed there. 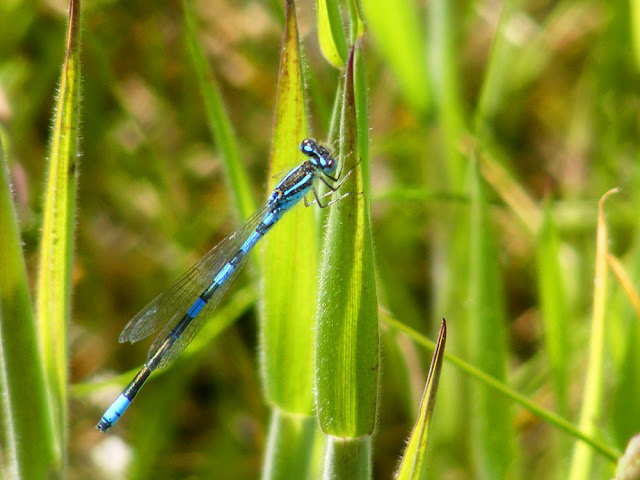 On my 6 June survey, conditions were much the same as I've described for the day before at Chaumussay. If anything, it was hotter, with very little cloud, but there were still hardly any butterflies. On these lusher, less calcareous sites, the only butterfly in any numbers was the Wall Lasiommata megera (not a species I would particularly associate with wet sites, but they like grassy sunny tracks on the fringes of woodland or bounded by hedges). At the end of the survey I popped over to the village of Boussay to check the limestone ridge there for orchids too, so once again I saw more orchids than butterflies. It's not the wet that has delayed the butterflies on the Boussay transects -- some of the species I have recorded here in previous years like damp sites. It has to be the low maximum temperatures in May delaying the adult butterflies on the wing. 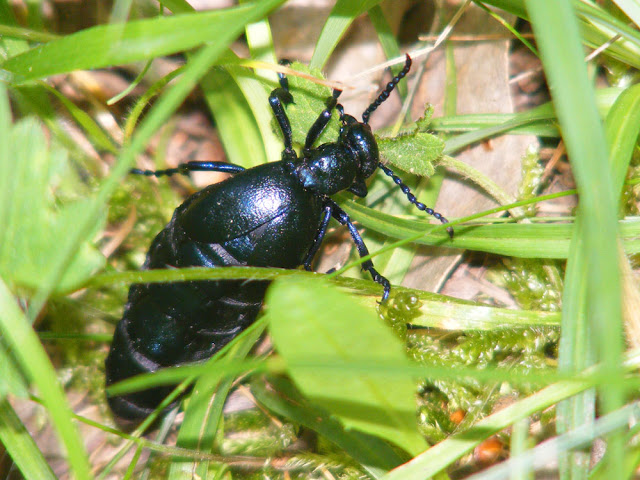 The butterfly selection was so poor on this survey that I didn't even bother to take a single photo of a butterfly during the afternoon. I did, however, see a wide variety of interesting wildlife, including a Western Whip Snake Hierophis viridiflavus crossing the path in front of me, head up and hissing; and a swarm of Honey Bees Apis mellifera gathering in a Common Hawthorn Crataegus monogyna on the edge of the forest.


Fly Orchid Ophrys insectifera, so called because the flowers are supposed to look like flies. Personally, I think they look like a Viking wearing a babygrow (or possibly a Winston Churchill style velour onesie). 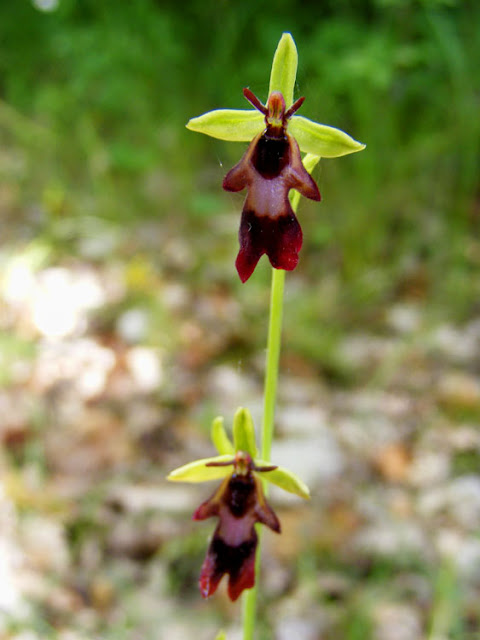 Like most small, demurely coloured orchids, Twayblades Neottia ovata are worth a closer look. 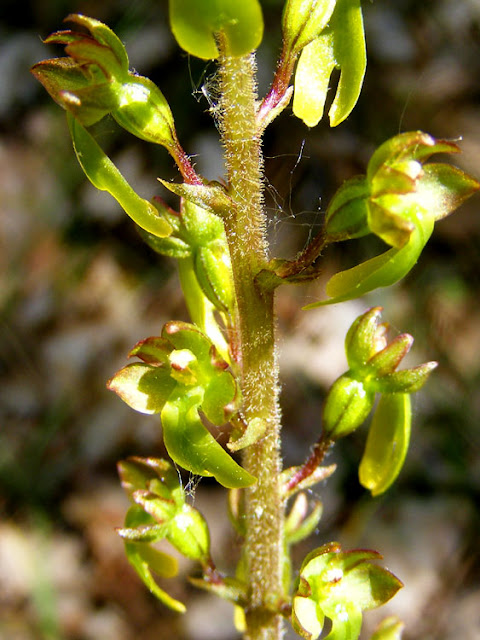 Narrow-leaved Helleborine Cephalanthera longifolia -- bright egg yolk orangey yellow in the throat, pure white flowers and no bracts at the base. 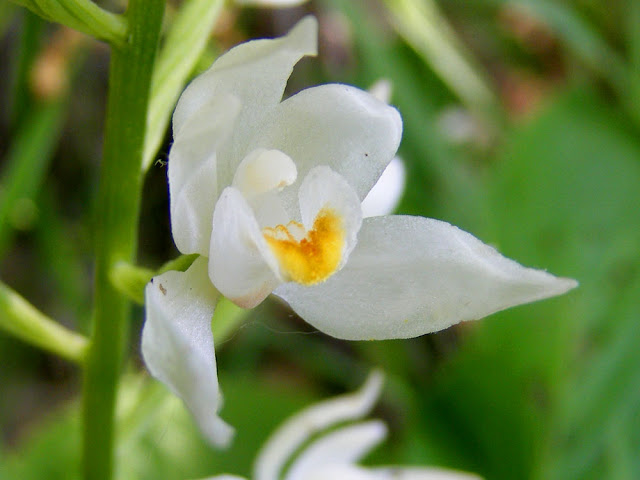 White Helleborine C. damasonium -- slightly dirty lemon yellow in throat, creamy coloured flowers, each with a bract at the base of the twisted ovary. 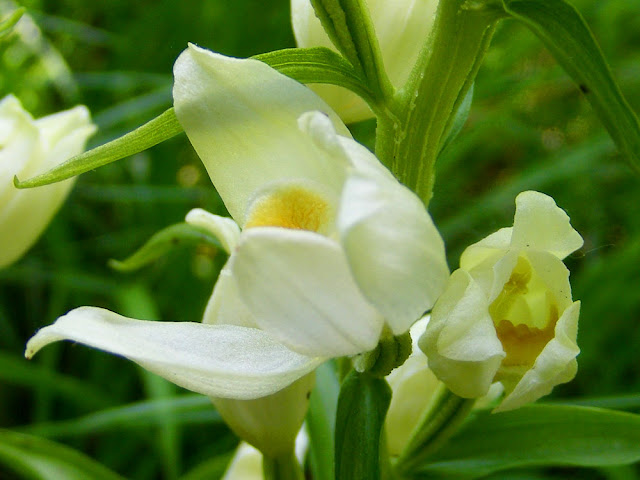 Greater Butterfly Orchid Platanthera chlorantha. pollinated by long-tongued moths attracted to its vanilla scent at dusk. You can see the nectar reward in the tip of a flower spur appearing over the 'right shoulder' of the flower facing you. 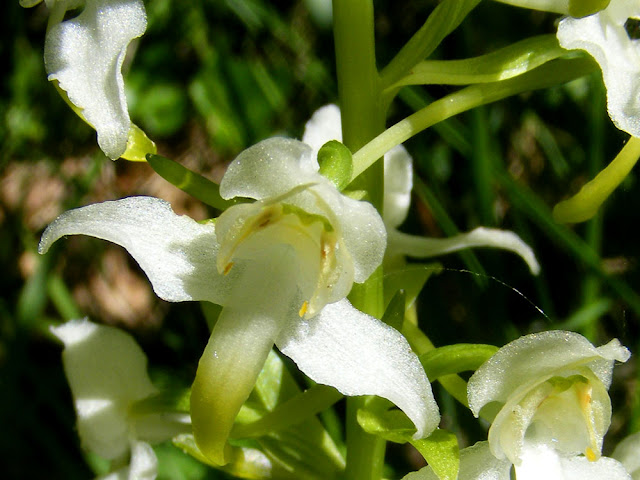 One of only three species with spotted leaves, out of 40+ wild native orchids growing here, Heath Spotted Orchid Dactylorhiza maculata is also one of the few local orchids that does not grow on the calcareous sites. 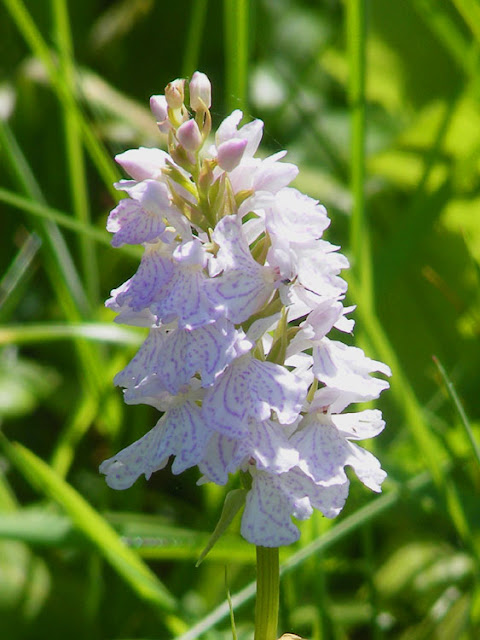 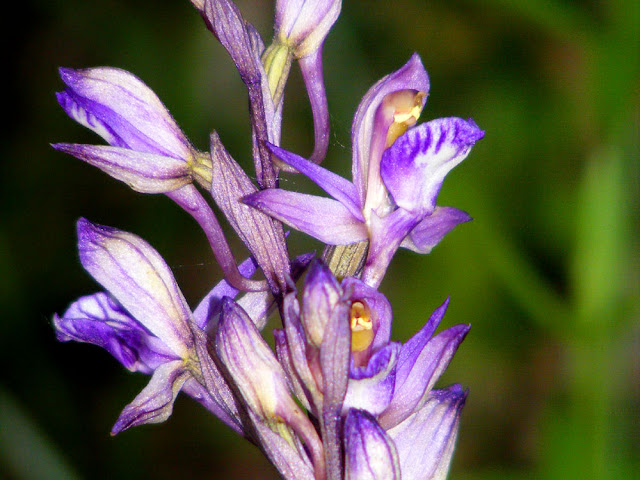 Perhaps we will get to see these blooming? We arrive tomorrow night, as original flights were cancelled due to strike.

M&B: yes, you should see most of these.

Great pix, Susan...
I think "Viking in a Onesy" is perfect for the Fly.
And Heath Spotted is one of my favourites... a delicately coloured Orchid.