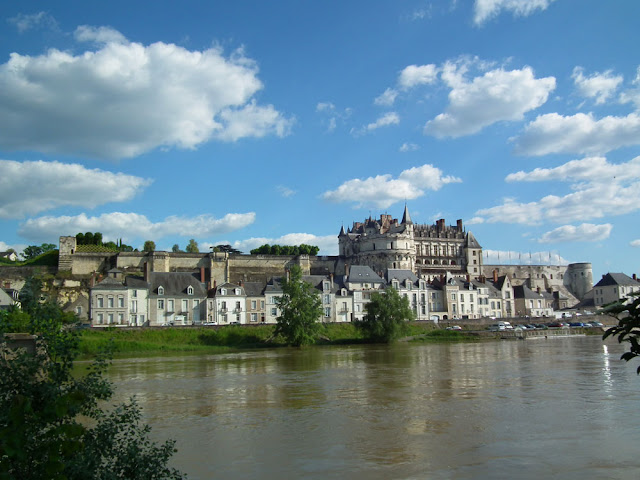 The huge chateau of Amboise sits in the village of the same name, overlooking the Loire. It used to be even huger, but much of it has been demolished, leaving only a massive curtain wall and a much reduced remnant of the chateau. It makes a great driveby and photo opp from the island in the river, but doesn't make it very high up our 'full visit' list as so much of the interior is 19th century. The best bits are the ramp for riding into the castle, and the chapel, which is a lovely 15th century flamboyant gothic building (but even it has 19th century glass, and a grave that might contain Leonardo da Vinci's remains, although they were rather too conveniently 'rediscovered' and moved here from the site where they were originally buried). We were talking to a local gîte owner recently who said he was amazed by the number of people who visit the chateau but never make it to the chapel. Considering the amount of interest in Leonardo since Dan Brown's popular fictional tale, I'm amazed too. 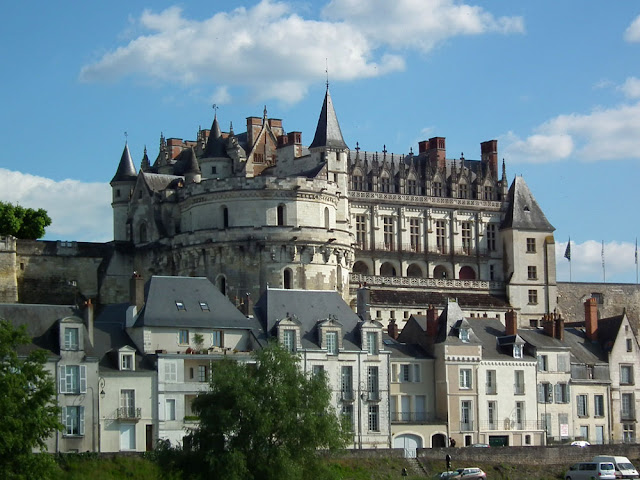 The chateau does feature significantly in the lives of the Valois kings though, so it is always nice to see the place which links so much history together. It was here that Marie d'Anjou raised the 14 children of Charles VII, and many subsequent royal children grew up here. It was here that the young Charles VIII ran through a doorway, hitting his head on the lintel and fatally injuring himself. And it was here that François I spent much of his time while he waited for the completion of the palatial hunting lodge of Chambord that will forever be associated with his name.

Update: and as Fly pointed out in the comments, not forgetting the Amboise Conspiracy in 1560, when the bodies of 1500 Huguenots associated with a plot to assassinate the young King François II were suspended on hooks from the façade of the chateau.
Posted by Susan at 09:00

One of our favourites.

Ad not forgetting the bodies of Huguenots hanging from hooks on the facade on the chateau in 1560 under the eyes of the young Mary Queen of Scots....

Fly: I was indeed forgetting them -- well spotted and reminded! The stench must have been horrendeous.