At about 5.30 am last Monday morning there was an intense hail storm over Tours. We had a client to meet at 9am in central Tours on Tuesday morning and were amazed at how littered Boulevard Heurteloup was with leaves and twigs from the plane trees that line the street and shade the central parking. The street was literally carpeted, even after 24 hours.

The farmland around Tours has been badly affected, with vineyards in Vouvray particularly hard hit, as well as canola crops in the area destroyed and sunflower seedlings shredded. The egg sized hailstones fell for about 15 minutes and simply shredded the vegetation, punched through slate roofs and dented cars. The vineyard workers reported finding dead rabbits and birds amongst the vines too. For some dramatic pictures of the worst of it, see the local newspaper report. 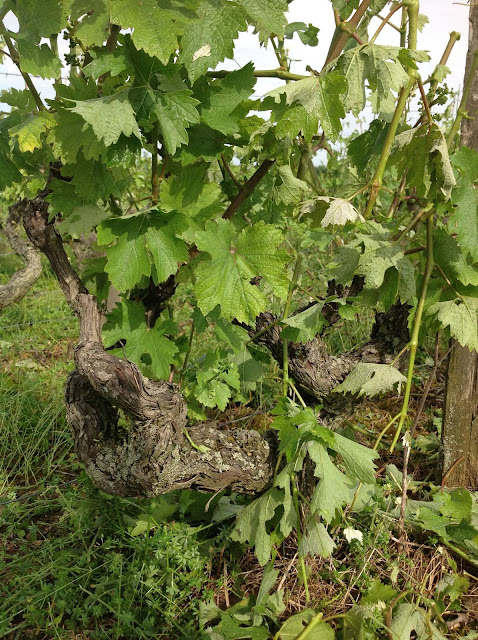 Our winemaker friend Alexandre Monmousseau, who owns Chateau Gaudrelle in Rochecorbon, posted photos of the damage on his Facebook page and it was a sorry sight. We called in to see the team at Gaudrelle on Tuesday evening and Alexandre updated us about the situation.

Many of the 180 vineyards in the Vouvray appellation have been affected. A few have lost their entire crop before it had even got underway for this year. Some have probably lost about 75-80% of their crop. Most, like Chateau Gaudrelle, estimate they have lost 50-60% of this year's crop. Not many have been lucky enough to escape with under 30% losses. A few winemakers will lose their vineyards or certain parcels because the damage has been severe enough to kill the vines. The vines have many jagged wounds and the weather remains warm and wet -- a recipe for a mega-fungal outbreak if ever there was one. 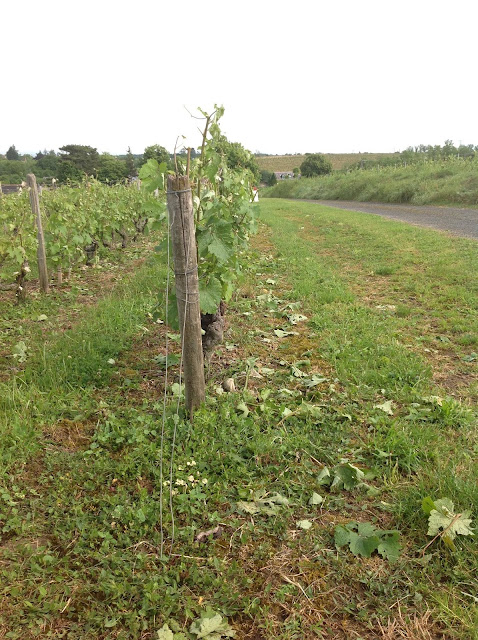 Those who will be most affected are those who are only just starting out and those who are not insured against hail. Hail does not fit the government criteria for declaring a natural disaster, so even those who are insured will have to be assessed and compensation payments may take a long time to reach those who need them. If the event had been officially designated a natural disaster, the insurance companies must pay claims quickly and without haggling about details. However, some government assistance will be forthcoming and the appellation is being very pro-active in ensuring all its members feel supported.

This hailstorm comes in the wake of the reduced 2012 vintage. Due to poor weather all last year, most vineyards in Vouvray, and throughout the Touraine as a whole, only managed about 50% of their normal output. With two years in a row of reduced quantity, some wineries will struggle to meet their commitments to suppliers. In Chateau Gaudrelle's case, they have arranged to buy grapes from partner vineyards in Vernou-sur-Brenne (also part of the Vouvray appellation) who fortunately were not affected by the storm. 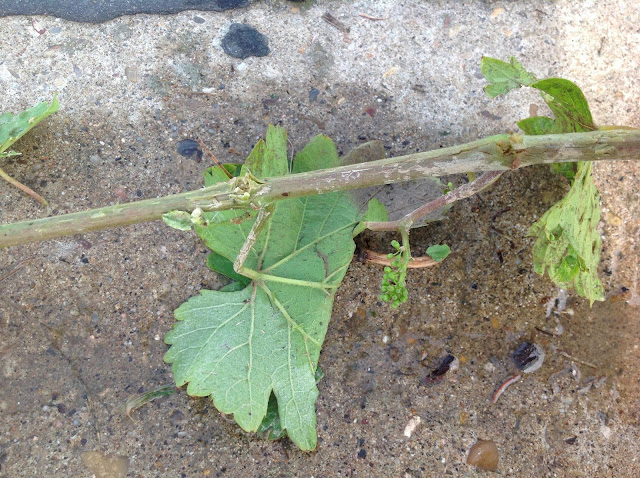 When we saw Alexandre he told us that it was very difficult initially to assess the extent of the damage. For a day or two, the vines remain green, but after some days more and more vines start going brown. His vine master Guillaume sprayed against fungal disease immediately after the storm, but it rained heavily again and his effort was wasted. On Tuesday evening he was out in the vineyard again, spraying fungicide. The site is steep and the ground slippery. Alexandre said that every time an emergency vehicle passed with its siren going, he hoped it was not for them. It is all to easy to tip a tractor over in such conditions, but Guillaume insisted the fungal treatment must be done immediately to prevent further threat to the vines.

We will continue to support the Vouvray vineyards, and Chateau Gaudrelle in particular, by visiting regularly with clients and spreading the word about their great value, high quality wines.

Chinon and Richelieu Storms: Chinon and Richelieu have also been hit by torrential rainfall, on Wednesday, with added golf ball sized hail. The vineyards here have mostly had a lucky escape, with much less damage overall. Most of the problems around Chinon and Richelieu have been from water causing erosion and subsidence or collapse and the event has been declared a natural disaster (so insurance claims will be fast-tracked). Our friends Colin and Elizabeth posted pictures of their garden and road at Braye-sous-Faye. On Saturday our friend Annie emailed me a picture of the new water feature in their courtyard at Champigny-sur-Veude (I must say it looked remarkably like the wall had collapsed, but Annie said she was rather enjoying having a stream running through the garden!) Check out Annie's new exhibition in Berlin, by the way. 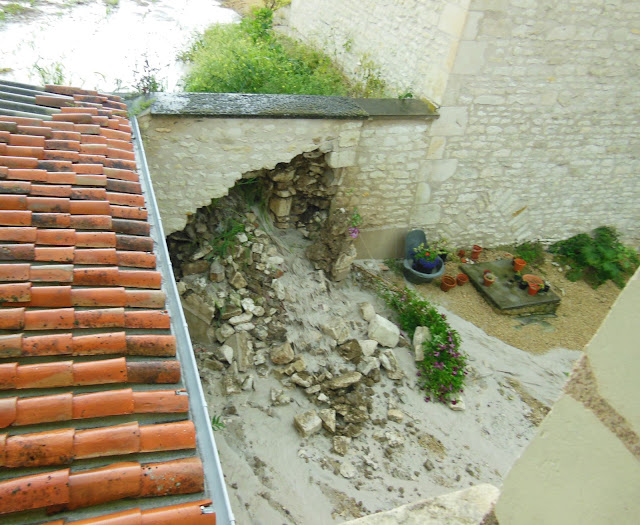 Still, it's nothing compared to the floods on the French-Spanish border and along the big central European rivers through the Czech Republic and Germany, or indeed the poor sods in northern India.

UPDATE: L'Eminence Rouge has also blogged about it and posted pictures of flooding in Richelieu. Many flooded cellars and gardens.
Posted by Susan at 09:00

Email ThisBlogThis!Share to TwitterShare to FacebookShare to Pinterest
Labels: Food and Drink, Tours

How awful.
Winemakers are always battling the weather but this is disastrous for them.

Buy from small independant Vouvray sources... as often as possible... keep their coffers full. The bigger suppliers like Moncontour will be able to "weather the storm" better.
A very good "excuse" to buy wine...
not that one is needed.

Jean: yes, it seems that there are a couple of new young winemakers in Vouvray and Montlouis at least who won't have the resources to continue.

Tim: all but about 6 of the Vouvray producers are small scale, so not difficult to support the right people.

We heard about the storms even from here in Melbourne, it hasn't been a good spring and hopefully summer will bring some enjoyment soon.

I'd read about the storm but it's easy to forget about the lasting effect it will have on the small producers.

As Tim says we need to buy when we can and hope that they can weather the storm.