Out with the Old

In general we have been happy with our Aurlane MySpace shower cubicle, and it was certainly an exciting day when it was installed and we could take a proper shower.

One aspect of the shower has not been so good though, and the problem started fairly early on in its life. The duckboard base, which was made of bamboo, began rotting and splitting almost immediately once it was exposed to soap and water. It was also impossible to clean properly, with too many nooks and crannies and narrow gaps between the slats that were too narrow to brush clean even with a toothbrush.


The old bamboo duckboard waiting to go to the tip. 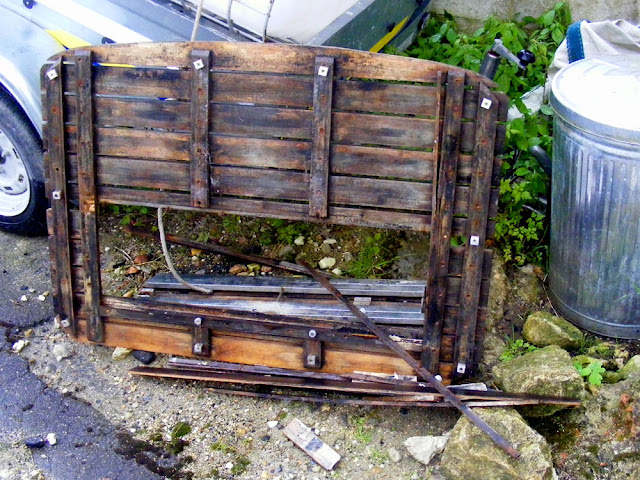 Eventually it began to smell and finally it got to be dangerous. Simon emailed the manufacturer when we first bought the shower cabinet to ask how to best take care of the bamboo, in the hopes of prolonging its life. He didn't get an answer. 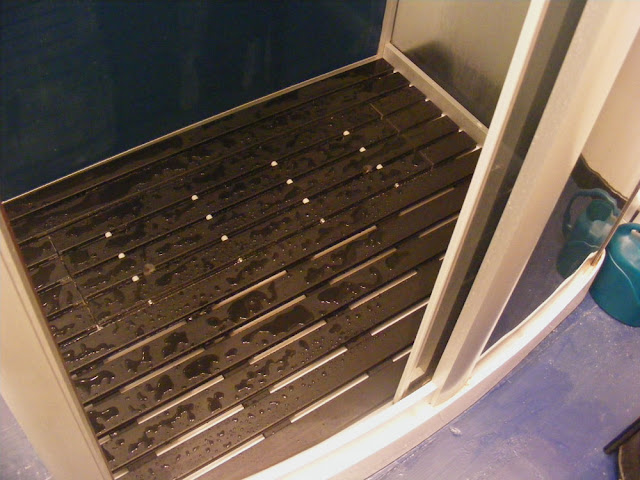 Once it was clear something really had to be done he tried again, and this time received a very prompt and helpful response. We could buy a new showerbase, made from recycled plastics, for about €100. That sounded rather expensive and it wasn't exactly our fault that the original one had fallen to pieces and was a health hasard, but we decided not to push it. We could buy direct from the manufacturer, or from a local supplier. We chose to go with a local supplier, Bricorama in Chatellerault, which saved us the delivery fee. It's fairly obvious that this was a known design fault that developed with these showers. To their credit the manufacturer has fixed the problem rather than putting their heads in the sand about it.

*********************************************
Visitors: Our friends Megan and Bryan arrived bearing gifts of exotic smoked cheddar from Glastonbury and jars of stem ginger in syrup. They've left again, on their way to Switzerland, with Lee, their trusty Aussie accented GPS. We plied them with local wine (Domaine des Rainettes, Bourgeuil, cab franc 2008 - very good, lovely raspberry nose, velvety mouthfeel) and homegrown strawberries (which we made them pick themselves...) Megan spotted a third little Pyramidal Orchid in the middle of the orchard, so I am chuffed to bits. This means that all of the orchid species have established new plants this year.

************************************************************************
Poster Campaign: A couple of years ago we asked readers to print off and put up posters to promote our custom day trip and tour business Loire Valley Time Travel. We thought you might be kind enough to help out again, by placing posters on notice boards at workplaces, where you have French lessons or anywhere you think someone planning a trip to France might see it. If you would like to put up a poster for us, please click on this link to the original post, which gives you links and instructions for printing off the posters. Once again, we would be delighted to treat you to the sights of Preuilly in Célestine if you are in the area and you let us know what clever spot you've stuck a poster.
Posted by Susan at 09:00

Tim: Well, quite by coin-cidence you've got the first letter right...

Anton: Exactly right! 3 points to you!

And for those of you who don't get on with phonetic symbols, it sounds like kybottee (the first syllable rhymes with eye) -- more or less.

There can't be that many instances of plastic being nicer to use than real wood but this looks like one of them.
I can't believe it's three years since you installed that shower - it seems like only months ago. But I can believe that it has been produced initially with an unsuitable base. A case of leaving the quality control to the customer again.....