On Sunday 16 June the Association de Botanique et de Mycologie de Sainte-Maure-de-Touraine sallied forth from l'Ile Bouchard to a limestone ridge just outside the picturesque village of Panzoult. The main drawcard was the magnificent display of the rare and protected orchid Red Helleborine Cephalanthera rubra that one can expect at this site in the middle of June. They did not disappoint, but the site has a wealth of other rare and protected plants too, and I saw several species new to me. Sadly we did not have the opportunity to visit the dovecotes in the area, which are apparently outstanding (although I am told not in very good condition).

I took a great many pictures on the outing and really struggled to choose just a few highlights for this blog post. Almost everything I photographed was another highlight! Adding to our enjoyment of the day was the warm sunny weather -- a real rarity so far this year.


The object of our visit, the lovely Red Helleborine. It was growing everywhere, and many of the flower stems were considerably taller than I had seen before. 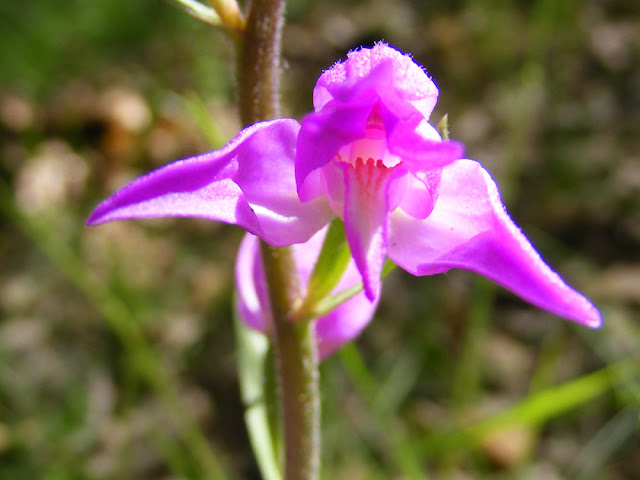 These Beautiful Demoiselles Calopteryx virgo were exhibiting some interesting courtship behaviour on vegetation over a small stream. The green and bronze female was wing flicking and 'tail-lighting' (raising her tail so the pale underneath was visible). If you see a male demoiselle doing this he is signaling aggressive defence of a territory. Presumably it means something quite different if done by a female, as this male persisted in his approach, eventually landing on her and grasping her behind the eyes as a prelude to mating. If the female had been reluctant to mate she would not have been hanging around in the male's territory anyway. There were about 4 males and the same number of females in just a few square metres. These small streams are very important for the Beautiful Demoiselles, which are pickier about where they will breed than the more common Banded Demoiselles C. splendens. The Beautifuls like shaded, colder, more aerated faster flowing water over a clean gravelly or sandy bed. 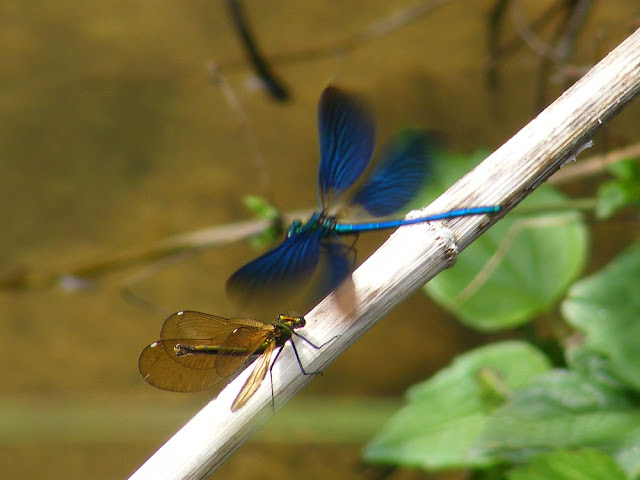 The striking chlorophyll free root parasite Ivy Broomrape Orobanche hederae was sending spearheads of flowers up from the ground in large numbers. 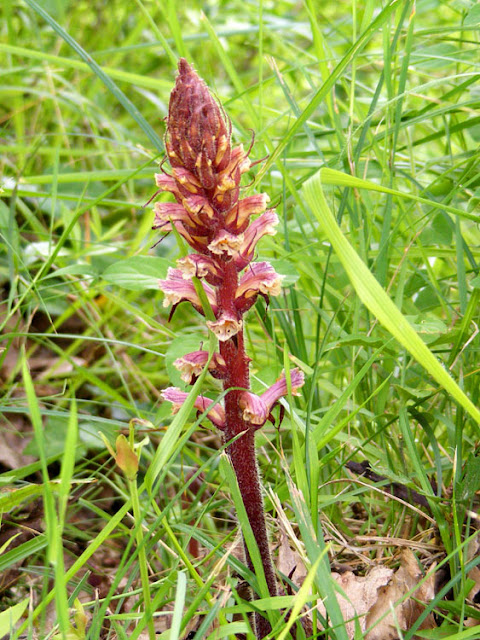 The view over the vallon. We walked from the house on the right in the distance, in a big arc, crossing the stream halfway. It's a beautiful place, and the barley crop is looking very good. I was told they are expecting a good harvest. Barley is the most important cereal grain used as stock feed here, and is one of the first crops to mature and be harvested. This is a high yield low protein winter two-rowed non-shattering Hordeum distichum variety according to François, one of the professional botanists in the club. He also passed a comment to the effect that farmers are choosing barley varieties on the basis of their high yields, regardless of whether the cattle like them (which I gather they don't, and my further reading suggests that summer barley with high protein is the more usual choice as stock food, and the winter barley is used for malting -- I will have to quiz him further about this). More information from readers in the know would be welcome. Barley is by far my favourite crop visually, as it looks beautiful for the whole of its time in the ground. 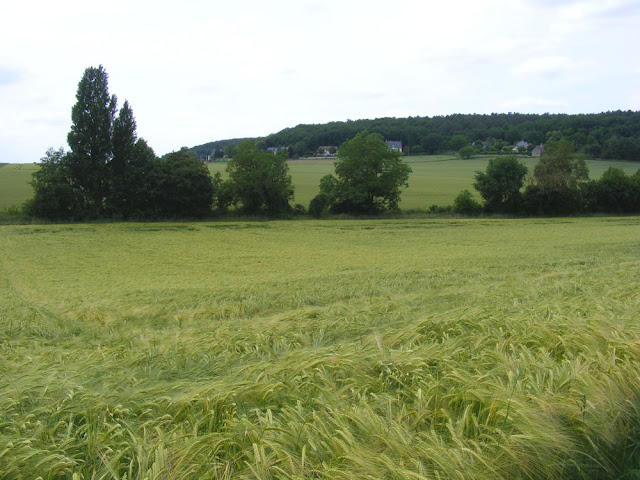 Ecologists talk about flower-rich grassland a lot. It is the ideal habitat for many species of insects and should exist in vast swathes across Europe. Sadly it no longer does and its loss is one of the main reasons for severe declines in certain plant, bumble bee and butterfly species. I think the picture below gives you an idea of what a good natural flowery grassland should look like. The main flowers you can see are Red Helleborines, Crested Cow-wheat Melampyrum cristatum and Common Birdsfoot Trefoil Lotus corniculatus. The first two are rare and localised chalk grassland specialists, the third is common in all but very acidic soils. An unusual hypochromatic Bee Orchid Ophrys apifera var flavescens. A normal Bee Orchid is pink and brownish, like this one in our orchard. These hypochromatic individuals have a mutation which means they lack (or are very low in) all except a yellow pigment. There were at least two of these in the grass at Panzoult. Bee Orchids are very prone to mutations, which I presume is a by-product of the fact that they frequently self-pollinate rather than rely on insect cross-pollination services. 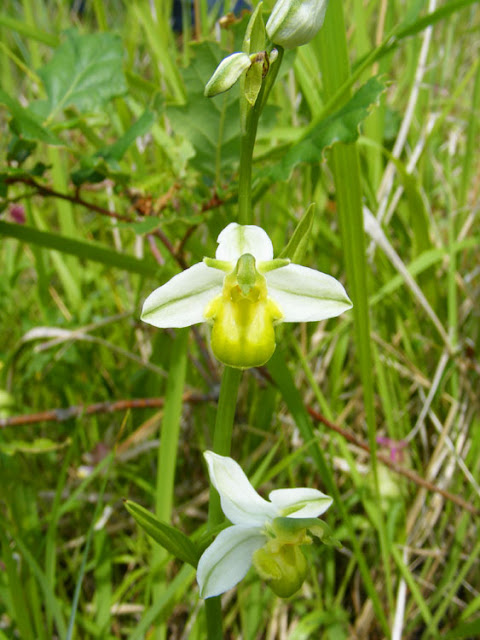 These sorts of grassy banks and roadside verges are becoming an increasingly important habitat network. François had quite a lot to say about local authority's roadside management practices and has worked out that the area of verges in the département roughly equal a sizeable National Park. He pointed out that for decades the local authorities have been making a rod for their own back by frequent mowing. The mowing and the fact that the clippings are not removed make for an ever increasingly fertile strip of land, with ever increasing rates of growth. Plants like nettles that thrive on the increased fertility were increasing, plants like orchids that need low fertility were decreasing. One good thing to come out of the economic recession is the willingness of those who control the purse strings to listen to the conservationists when they mention win-win approaches such as a reduction in mowing. It began with fauchage tardif (late mowing), which was a good start, but François reckons that the local authorities still didn't quite get it and mowed everywhere between 1 and 15 September, whether it was necessary or not. Now some authorities are displaying fauchage raisonné (intelligent mowing) signs. This is much better. These local authorities are restricting mowing at intersections to a short distance in each direction, and often not mowing at all in the autumn, but waiting to see if the frost will do their work for them. Not only does this save fuel, time and other resources, but the routine restores a more natural balance for the plant life, encouraging and protecting a wide range of wild flowers. Plus the shorter range of visibility means that drivers are more careful and drive slower. François would like to see it go even further, as he thinks the collection of clippings for rabbit and goat food should be routine and maybe even some grazing along the roadsides could be reintroduced. 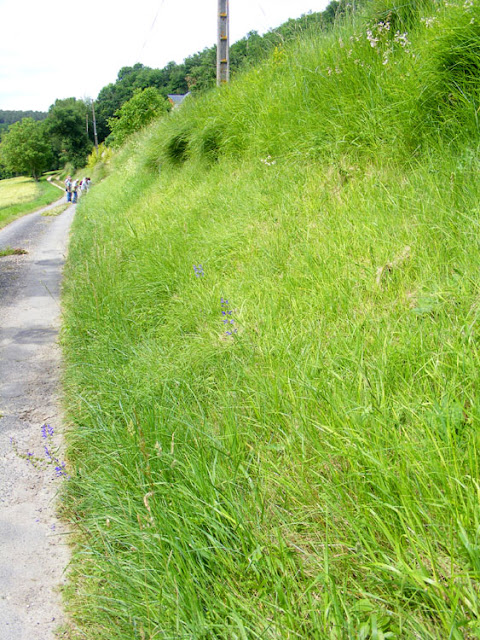 Don't know what happened to my
comment. Perhaps we can have some
of those left-over photos tomorrow?
Wouldn't the manure from grazing
animals provide more fertile soil
for nettle-types than grass clippings?

Sheila: Not tomorrow, but I might use them for a mid-winter post, when everyone is in a blue funk and needs reminding we did have a few nice days this summer.

Animal manure is just semi-composted grass clippings. The animals themselves use some of the nutrients and the rest are evacuated as manure. Grass clippings that are left from mowing have more nutrients (although may use some in the process of breaking down). The animals impact would be limited as they would be on the roadside in the same spot for a day or two at the most. Mowing several times a year is adding way more nutrious material, and setting up a cycle that produces more and more.

Love the anaemic Bee... looks quite attractive.
And the other pictures are great, too.

Susan... it depends on the animal as to how much is used and how much is left... look at the rich growth of grass around a cow-pat.

What they do do, however, is concentrate those nutrients that they leave at the point of deposit... while depleting the nutrient value of the grazing overall.
What I am desperately trying to do here is create GIANT "cowpats" by raking the mowings up into piles...
it is beginning to work... the nettle beds have reduced in size because the grass that was growing with them is favoured by the mowing.

Now we have the autoportee, I will be able to move the cowpats into a collection more central spots that will allow an increase of the nutrient levels in those spots... and choke the nettles there, too!

The comment by François "clippings for rabbit and goat food should be routine" doesn't take into account the increase in heavy metals in roadside verges from older and damaged catalytic converters...

Tim: very good point about how manure creates a micro-mosaic.

I'll see what Francois has to say about the heavy metals. My thought is that our water courses are quite shockingly contaminated already due to the lead based UV filters on guttering and garden furniture etc, so a bit more from the roadside might not make much difference...

According to the analysis that comes with the water bill our Aitch-Two-Oh supply is fine... so the goats' and rabbits' drinking water will be fine...
but feeding them contaminated grass will directly enter their milk or meat and therefore affect us that way.