While we were in Australia the Tasmanian Forest Peace Deal was signed. Activists hoped that it would be an end to a long fight to protect the old growth forests from unacceptable exploitation. This fight has been going on for all of my life, and still the logging companies and the hydro-electric companies are allowed in to wilderness areas to destroy everything. The Tasmanian government seems wilfully unaware that there are other ways of managing forests and other ways for local people to earn a living besides working for largescale unsustainable forestry employers whose approach is to clearfell natural forest to produce large volume low quality products.

It appears that it is not the end though. The Tasmanian government has still not adequately protected some areas and species, and may still choose not to submit a request for the World Heritage Status to be extended over the forests to the east. 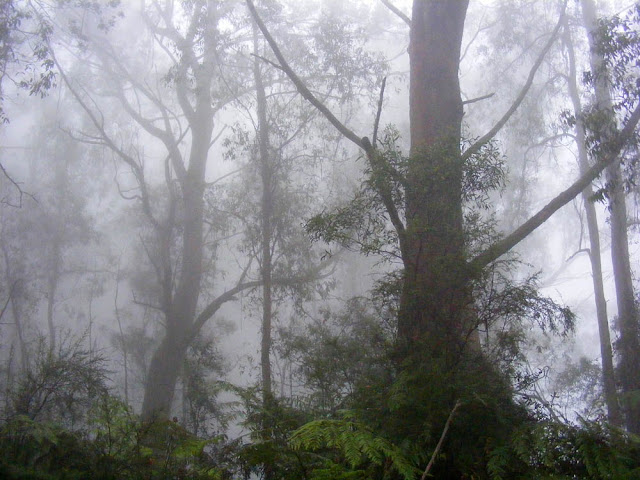 There is a fine small scale specialist timber industry in Tasmania which is desperate to see the situation improved, but as one of the artisan furniture makers said, it's now too late for a couple of the really high quality furniture timber tree species -- they've been cut down along with all the others and made into plywood (and until recently, pulp!!).

The focus on Tasmania may mean that old growth natural forests in Western Australia, Queensland and New South Wales are quietly being destroyed too, while they are out of the public eye. The whole situation is one of the saddest conservation struggles I know. Old growth natural eucalypt forest, particularly the wet forests such as in Tasmania and New South Wales are amongst the most inspiring and special places on Earth (see my 2009 post on visiting a valley full of tree ferns, and Ian Fraser's post on Monga NP). It is perfectly possible to manage them sensitively for the benefit of people and the environment. Unfortunately, I think the compromises made by both sides of the Forest Peace may result in aspects of the agreement not being met. Once that happens it will unravel very quickly and we will be back with the vitriole and the destruction as a modus operandi.

*****************************************
Weather Update:  No wonder we are all feeling miserable and complaining about the weather. Following a particularly sun free March and April, May has turned out to have had the lowest levels of sunshine on record. We had 142 hours, when the average hours of sunshine is 210 and two years ago we had 311! Normally I would be picking grape leaves to make dolmades, and thinning flower buds on the vine. With the cold dull weather, the leaves aren't big enough, and there is no sign of flower buds.
Posted by Susan at 09:00

what is it about people and their preoccupation with cutting down forests. why doesn't post-consumer fibre take off?