If you just look at the statistics, 2012 comes out looking like a nearly normal year -- just about average temperatures, only slightly more than average rainfall, average hours of sunshine -- but look more closely, and the details show an anything but average year. 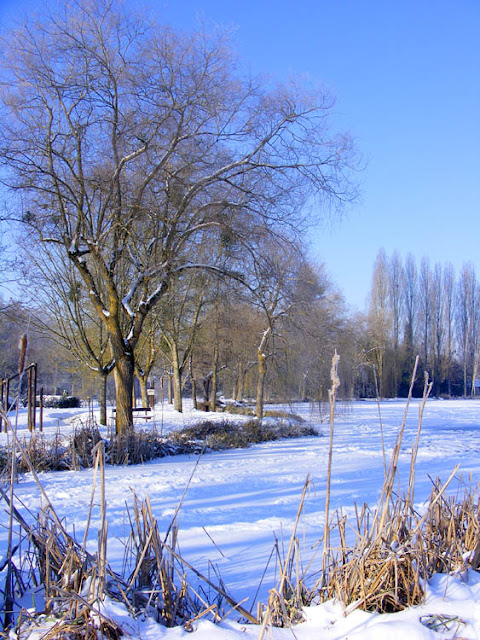 For 2 weeks in February we were sparkling white -- it was beautiful.

Only February, April and July were colder than normal -- but that's quite a big 'only'. These are months that are important for the survival and reproduction of many species. February was particularly cold, for an unusually long time. Fortunately late summer was rather warm, making up to some extent for the feeble July temperatures. The only extreme of weather we didn't experience in 2012 was a full on hurricane, although there were some very windy days in October and December, with gusts up to 85km/hour. 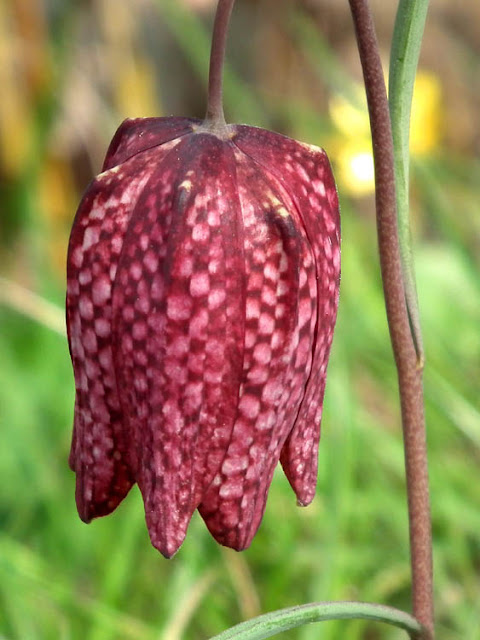 A 2012 Winner -- Snakeshead Fritillary Fritillaria meleagris wasn't bothered by the snow and flowered before the hot dry March could dessicate its riparian habitat.

January was unusually mild and dry, but the extremely cold spell in the first half of February meant that we had the coldest weather since January 1987 to begin the year. The temperature didn't go above 0°C for a fortnight. I have been told that it reached -27°C in some of the more exposed places around here, but officially the lowest temperature was -18°C (which is unusual, but not exceptional for here). Despite all the snow, February was even drier than January. Many garden plants were killed, but the blanket of snow saved the young cereal crops and the vines, insulating them so their roots did not quite freeze. A particular plus has been that most of the Pine Processionary Thaumetopoea pityocampa caterpillars were killed in their nests, and the population has not yet recovered. 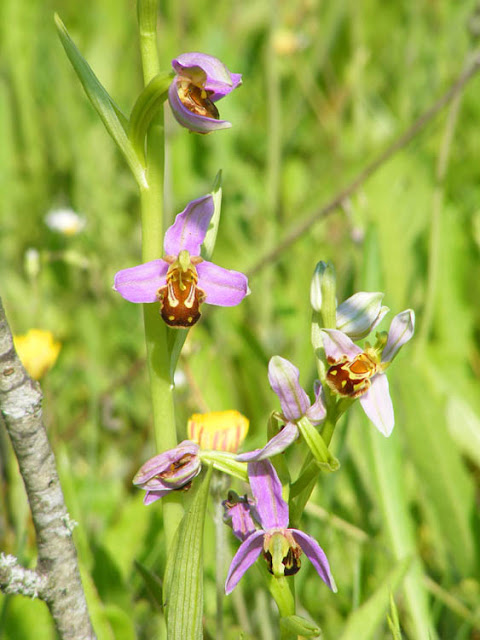 Winners -- Bee Orchids Ophrys apifera in the orchard in May.

March continued the unusual weather, in that it was the sunniest month since 1950, downright hot and worryingly dry. I remember thinking 'oh no! another year like 2011', with no rain at all in the winter and spring. I needn't have worried -- April was cold, wet and grey! The month never got warm enough or dry enough for me to do what should have been my first butterfly survey of the year, but at least it redressed the rain deficit. May was more normal, but still rather wet. There were late frosts and several hailstorms, which damaged vines along the Loire, and put paid to most peoples' fruit crops. STERF, the French butterfly survey programme, could tell right from the beginning of the season that it was so bad that butterflies numbers would not recover for 2012, and announced it was the worst year for this group since 2006. Many birds abandoned attempts to breed due to lack of shelter (late leaf burst) and poor weather (nests washed out). Small mammals such as voles, and reptiles (lizards and snakes) suffered flooding of burrows and food shortages. The combination of winter cold and 2011's extended dry period meant low numbers of amphibians breeding. 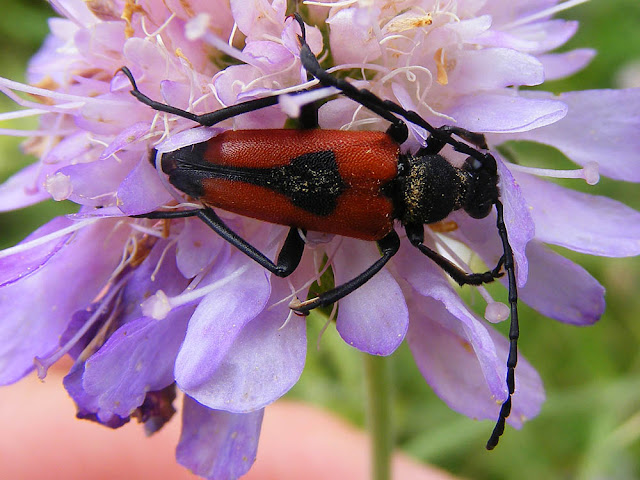 I saw a number of species of medium sized longicorns attracted to flowers, like this Stictoleptura cordigera, from mid-summer onwards.

June continued in much the same vein as May, and into July, which never satisfactorily warmed up. The good news was that the orchids loved these cool, but not cold, rather damp conditions, and had an excellent year. The orchids in the orchard were taller and more floriferous than I have seen them previously. Several of my butterfly survey sites got so overgrown that I had to abandon them. On the other hand, moths and butterflies (both Lepidoptera), bees and wasps (both Hymenoptera) and flies (Diptera) continued to have low numbers and in general pollination of vines and fruiting plants was poor because of the rain and low temperatures restricting insect activity.  Finally, August was hot, dry and sunny, with a proper heatwave mid-month (although nothing like 2003 or 2006).  Dragonflies (Odonata) were one of the few groups of insects that had a much better year than the previous one. Common wasps Vespula and Dolichovespula spp were in very low numbers, but hornets Vespa spp (both native and alien) did relatively well. The later emerging species of beetles (Coleoptera), such as longicorns Cerambycidae, and flies like horse flies Tabanidae also managed a reasonable year. 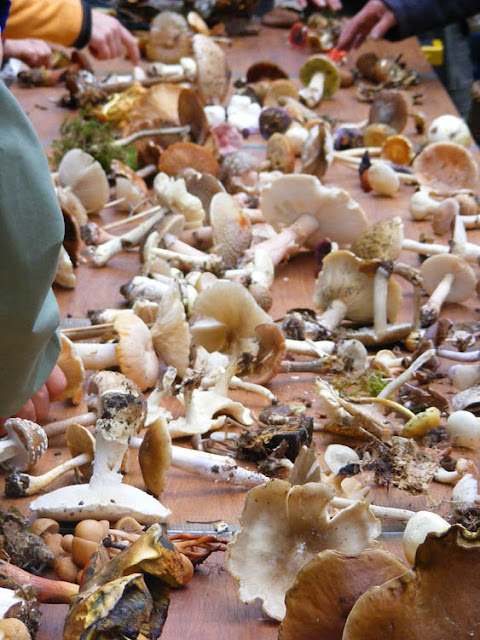 Fungi as far as the eye can see on an outing in October.

September presented as a nice normal month, with pleasant temperatures and average rainfall. October, although overall was mild (only a single frost), was also very wet, and there were some very windy days. November and December were mild (no frost!), bringing a lot of rain, with some flooding and standing water in fields. Larger mammals (everything from squirrel size up)  seem to have done rather well, being better able to withstand the flooding, even if they were burrow dwellers. It turned out to be an excellent year for fungi too. Bush-crickets (Tettigoniidae) seem to have had a fairly good year, but grasshoppers (Acrididae) a fairly poor year, presumably due to different habitat requirements (bush-crickets live in scrub and low bushes, whereas grasshoppers need open grassland that is not too overgrown). True crickets (Gryllidae) didn't do very well, as it didn't warm up soon enough for them.
Posted by Susan at 09:00

True crickets: Did exceptionally well here... for the first time we had large numbers of Field Crickets and the little brown Wood crickets were much more visible [and audible]...
Bush Cricket numbers seemed down in the meadow... I didn't get the "locust swarms" when mowing that I normally do.

Dragonfly numbers seemed down, here, this year... as were the Damselflies... but what there were seemed to be around much longer... so I am thinking that they had an extended "erruption" and numbers were more or less static?

With a lot of scrub nesting birds the habitat loss here was extensive... especially the brambles that had been completely killed off above ground. These had to re-grow completely and aren't
But the birds didn't abandon attempts to breed, they just bred later... there was a benifit to this... the singing went on into late June!! Normally mid-May sees the end of territorial song.
The birds nesting in the Blackthorn, however, had no such problem... it flowered on time and the leaf burst was normal.
Overall we had an observable increase in juveniles here over the previous two years.

The Lizard orchids here were way taller and more impressive than I'd seen before... and the crowns coming up now are also much larger.
But the Chaumassay orchids were dissapointing this year...

Our total rainfall is only a little higher than Walt recorded... and the temperatures a little lower... and I've found a source of spare wind speed sensors for our weather station... so that should be corrected soon.

Nicole said it got to -20°C at Les Limornières and our neighbuor Mme André struggled to keep warm in her cottage during the cold of February. She did look as though it had been a bruising experience when we saw her for the first time in April.
Luckily we did not bring my dad during the hottest week of August - I don't think he would have coped at all - our friends Chris and Gail who have a holiday home in the village said it was 40°C on two afternoons.
So that's a temperature difference of 60° in one year - I wonder if that's a record.
Unfortunately we hit many of the rainy spells when we were chez nous. In fact if you are ever short of rain - send for us - it seems to work most times !!

Tim: My field crickets in the orchard were distinctly disgruntled by the whole weather deal last year. I haven't recorded wood crickets there, so I have no info about them.

I had similar habitat loss around the orchard for birds. You are right, they didn't give up nesting altogether, just abandoned the first attempts and tried again later -- I worded it badly.

All my local contacts agree with me that odonts had a very good year last year, especially compared to the year before which was a really terrible year for them.

Chaumussay orchids depended on where you went to see them. It's true the Military's at La Croix Sourd didn't flower at all last year, but there were some big ones at a roadside site on the same side of the river and the other side of Chaumussay. Otherwise Chaumussay struck me as pretty good last year...(I didn't check the Lizards at the fontaine St Marc though...)

This year's rosettes for all species in the orchard are certainly very robust looking!

Jean: it wouldn't have been difficult to hit the rainy spells -- there were plenty of them! A lot of the oldies decamped temporarily to the retirement home in the winter -- maybe Mme André needs to consider it.

Thank you....it's good to keep in touch with the doings of nature back in France - most of my friends only tell me about the politics!

Fly: whereas I am only peripherally interested in politics :-)

Wonderful to have Susan's and Tim's analysis of weather and nature 2012. As temperatures begin to feel colder I am reminded of the 1m20 icicle in February. Yes -20C recorded on the plain above this village. In August, definitely 40C, possibly above' Les cigales "sang". I'm not an expert but thought that was not less commonplace for this region. Thank you for the reflection of the year and please let me know when the fritillaria bloom as they do not last long.

Sweetpea: I'll try to let you know in time. Thanks for the cicada observation too.

The other thing I forgot to mention was that I got several reports of mole crickets this year -- they like the soil damp, but maybe not quite as damp as it got and so were more visible on the surface.