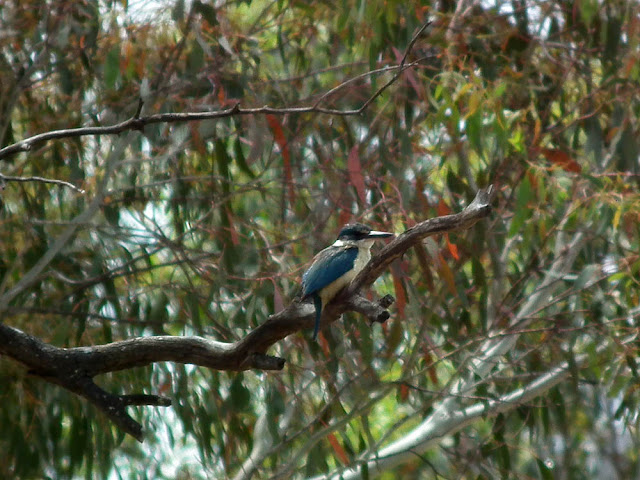 One day while we were staying in Canberra in November last year we put a picnic together and drove out to Namadgi* National Park. While we sat on a rock and ate our lunch this Sacred Kingfisher Todiramphus sanctus held our attention. It sat on this, or nearby branches, calling 'kekekekeke' all the time. Periodically it spotted a tasty insect and flew down to capture it mid-air or low over the grass. It would bring the prey back to the perch, then drop down to a large knot hole on the trunk of the gum tree. The knot hole must have contained its mate and their nest. 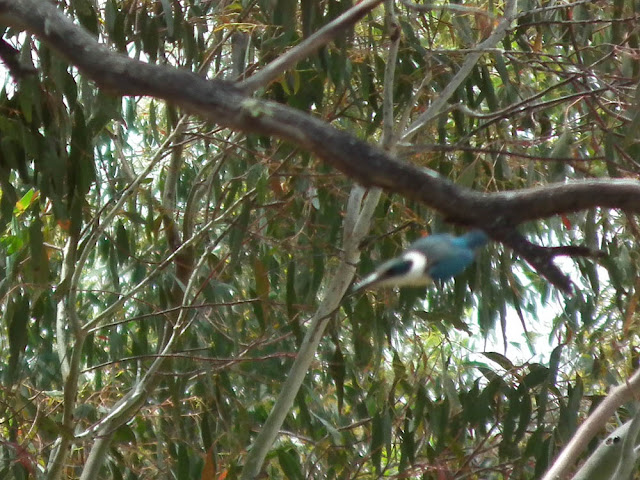 The bloke next door to me had one of his garage doors blown right off and the people in the next street had their Boab tree blow right over and crush the fence.

The council trucks were like worker ants, the small ones  with crews pulling the branches to the footpaths and the big Muncher mulch trucks back and forth reducing the limbs to wood chip.

It was quite scary to be out driving in it but this area was without power from noon till 7.30pm so Dad's oxygen(uses it 24hrs) machine stopped without power and 2of  the 3 back up portable bottles were empty (3 hours supply each). The paramedics arranged for me to get some replacements from a nearby nursing home that had a big delivery on Friday.

The power was still out toward 5 pm and all I had in the house were a few candles and a small torch, so it was back out to K mart for a decent size lantern and batteries.

We had 144mls in the 24 hours 9am Sat to 9am Sun, would think we had the same yesterday,will check on Elders website later.

Diana just rang and said the creek at her place at Withcot is up and they can't get out, no idea how long they will be isolated. Grantham and Laidley had a lot of people evacuated yesterday as the flooding in some areas is as bad as 2011.

Bundaberg had some Tornados !!! on Saturday and there has been severe damage up there and flooding. TV has been focused with weather reports and constant updates.

That's right about QLD, things are not well with floods ther and in Victoria and Tasmania we have bushfires - two extremes but it is a big country.
Leon

Hi S&S, yes I checked on the rainfall 24 hrs to 9am this morning (Monday here) and we had 142ml, so that is over 300 mls in two and a half days.
Wind was gone today and rain was sporadic, with clouds much higher and light breaking through sometimes.
The Gold Coast is still having cyclone conditions and the Brisbane river is in damage mode, destroying anything in its path.
Ipswich is waiting for the river there to peak late tonight, many homes flooded and Bundaburg is flooded to a degree not ever seen before.The hospital is being evacuated this afternoon.
As the rain moves down South, Grafton is bracing for bad flooding, because there is water coming from Qld plus what rain they get locally.